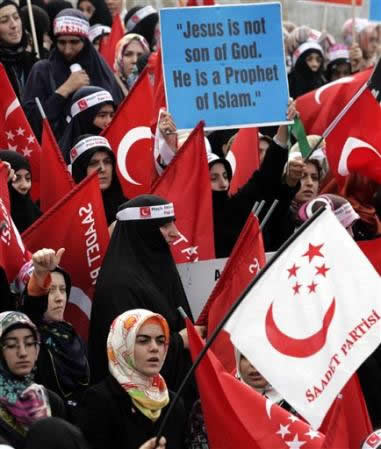 Having regard the Dialogue between Group of the European People’s Party and European Democrats and the Orthodox Church.

1. Welcomes the adoption in February 2008 of the Law on Foundations in Turkey and appreciates the Commission’s assessment that this law addresses a number of outstanding property-related issues concerning Christian communities,

2. Urges the Turkish government to ensure that the law be implemented in line with the ECHR case-law and tackle unresolved issues of properties seized and sold to third parties as well as properties of foundations fused before the adoption of the new legislation,

3. Reiterates that a legal framework developed in line with the ECHR case-law is still needed so as to enable all religious communities to function without undue constraints, in particular as regards their legal status, training of clergy, election of their hierarchy, religious education and the construction of places of worship,

4. Encourages Turkish authorities, all political parties, civil society and the communities concerned to engage in creating an environment conducive to full respect for freedom of religion in practice,

5. Reiterates its call for the immediate re-opening of the Greek Orthodox Halki Seminary.

6. Reiterates the call for the recognition of the juridical status of Churches in Turkey, in the same way that Member States of the European Union have recognised the juridical status of Muslim communities. The protection of religious freedom in line with the principle of reciprocity and international justice is of outmost importance.

8. Express the hope that the Ecumenical Patriarch, the spiritual leader of 300 million Orthodox Christians worldwide, will be let free to exercise his religious duties in line with the letter and spirit of article 9 of the European Convention on Human Rights and the case law of the European Court of the Human Rights. Reiterates its call for the unhindered public use of the Ecclesiastical Title and the prerogatives of the Ecumenical Patriarch.