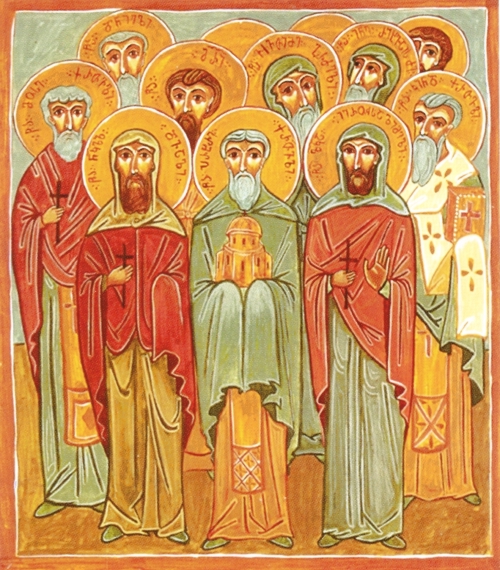 Saint Prokhore the Georgian, a descendant of the noble Shavteli family, was born at the end of the 10th century and grew up in a monastery. When he reached manhood he was ordained a hieromonk and labored for one year at the Lavra of St. Sabbas in Jerusalem. Then, with the blessing of his spiritual father Ekvtime Grdzeli, he began the reconstruction of the Holy Cross Georgian Monastery near Jerusalem.

According to tradition, at this spot Abraham’s nephew Lot planted three trees—a cypress, a pine, and a cedar. Eventually these three trees miraculously grew into one large tree. When the Temple of Solomon was being built, this tree was cut down but left unused. It is said that the Cross on which Christ our Savior was crucified was constructed from the wood of this tree.

In the 4th century, the land on which the miraculous tree had grown was presented to Holy King Mirian, the first Christian king of Georgia. Then in the 5th century, during the reign of Holy King Vakhtang Gorgasali, the Holy Cross Monastery was founded on that land. The monastery was destroyed several times between the 7th and 9th centuries.

Finally, in the 11th century, King Bagrat Kuropalates offered much of his wealth to Fr. Prokhore for the restoration of the monastery. St. Prokhore beautified the monastery, then gathered eighty monks and established the typicon (the monastic rule) for the community in accordance with that of the St. Sabbas Lavra.

When St. Prokhore had labored long and lived to an advanced age, he chose his disciple Giorgi to be the monastery’s next abbot. Then he departed for the wilderness with two of his disciples, and after some time the righteous monk yielded up his spirit to God.

Beyond this, little is known about the life of St. Prokhore. According to Georgian researchers and scholars, he was probably born sometime between 985 and 990. He spent the years 1010 to 1015 in Jerusalem, and labored at the Lavra of St. Sabbas until 1025. He reposed in the year 1066, between the ages of 76 and 81.

The holy martyr Luka of Jerusalem lived in the 13th century. He was born to an honorable, pious Georgian family by the name of Mukhaisdze. After the repose of Luka’s father, his mother left her children and went to labor at a monastery in Jerusalem. 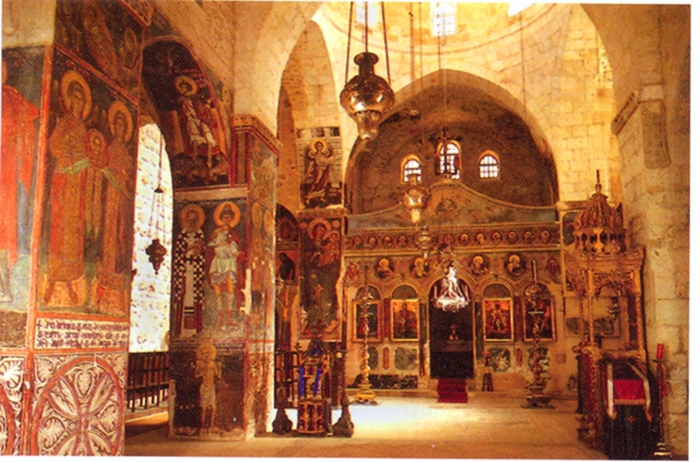 When Luka reached the age of twenty, he traveled to Jerusalem to visit his mother and venerate the holy places. After spending some time there he decided to remain and be tonsured a monk. He was later ordained a deacon and became fluent in Arabic. Soon the brothers of the monastery recognized his wisdom and asked him to guide them as abbot. For three years Luka directed the monastery in an exemplary manner.

But the devil was envious of the holy father and provoked a certain Shekh-Khidar, an influential Persian at the court of Sultan Penducht,[1] to take up arms against St. Luka. Sultan Penducht then transferred possession of the Holy Cross Monastery to Shekh-Khidar, who «treated the Georgian monks in a beastly manner and finally ousted them from the monastery altogether.» Fulfilling his God-given duty, the blessed Luka insisted on personally confronting Shekh-Khidar in defense of his brotherhood.

Luka’s Christian brothers and sisters warned him, saying, «Shekh-Khidar is threatening you…. Flee and hide from him!» But Luka paid no heed to their admonitions, certain that it was more fitting to die for Christ than to live for the world. As he had insisted, he himself approached Shekh-Khidar and asked for the release of the imprisoned fathers. Luka told him that he was prepared to accept any demands. The wicked Persian leader demanded nothing from Luka except that he convert to Islam, promising to make him emir if he consented. When he refused, the furious Shekh-Khidar ordered St. Luka’s beheading.

After the terrible deed had been performed, St. Luka’s severed head turned toward the east and gave thanks to God with an expression of pure peace. Soon after, his precious body was set on fire at the command of the bewildered Shekh-Khidar. This occurred in 1277.

St. Nikoloz Dvali the Martyr was born at the end of the 13th century to a God-fearing couple who directed his path toward the spiritual life. At the age of twelve Nikoloz traveled to the Klarjeti Wilderness and was tonsured a monk. From there he made a pilgrimage to Jerusalem and remained in the holy city, settling at the Holy Cross Monastery. Burning with desire for the apostolic life, Monk Nikoloz was determined to die a martyr’s death.

In Jerusalem a group of godless men arrested and tormented St. Nikoloz for publicly confessing the Christian Faith, but a group of Christians succeeded in rescuing him from prison. Then, in accordance with his abbot’s counsel, St. Nikoloz relocated to a Georgian monastery on Cyprus. There the pious monk beseeched the Lord to make him worthy of the crown of martyrdom. One day, while he was praying before the icon of St. John the Baptist, he heard a voice saying, «Nikoloz! Arise and go to Jerusalem. There you will find a Georgian monk who will teach you the way of righteousness and encourage you on the path of martyrdom. He has been appointed to guide you.»

Accordingly, St. Nikoloz returned to Jerusalem, met the monk whom God had appointed, and informed him of what had been revealed. The Most Holy Theotokos and St. John the Baptist appeared to St. Nikoloz’s spiritual father, who had been praying intensely for guidance, and told him that it was the Lord’s will for Nikoloz to journey to Damascus.

While in Damascus, the holy father entered a mosque and openly confessed Christ to be the Savior, reproving those present for their folly. The angry Muslims seized St. Nikoloz, beat him, and cast him into prison. After a great struggle, the metropolitan and local Christians succeeded in recovering him from captivity, but he immediately returned to the Muslims and began again to denounce their ungodly ways. Again they beat him mercilessly, lashed him five hundred times, and cast him in prison for a second time. But the holy martyr’s wounds were healed through the miraculous intercession of St. John the Baptist, and after two months he was released from prison.

By chance the emir of the city caught a glimpse of St. Nikoloz as he was preparing to return to Jerusalem. The emir recognized him and sent him to Dengiz, the emir of emirs. Dengiz flattered him and offered to convert him to Islam, but St. Nikoloz bravely defended his faith in Christ. In response, Dengiz ordered his execution.

At the hour appointed by Dengiz, the blessed martyr turned to the east, joyfully bowed his neck to the sword, and prayed, «Glory to Thee, Ο Christ God, Who hast accounted me worthy to die for Thy name’s sake.» The sword pierced his neck, but the severed head glorified God seven times, crying out, «Glory to Thee, Ο Christ our God!» The Persians burned the saint’s body, and for three days a pillar of light shone at the place where it lay.

When St. Nikoloz’s spiritual father heard about his martyrdom, he prayed to God to reveal to him whether Nikoloz would be numbered among the saints. Then one day while he was reading, he saw a vision of a host of saints standing atop a mountain, illumined and surrounded by a cloud of incense. Among them the Great-martyr George shone especially brightly, and he called St. Nikoloz, saying, «Nikoloz! Come and see the monk, your spiritual father. He has shed many tears for you.» Nikoloz greeted his spiritual father, saying, «Behold me and the place where I am, and from this day cease your sorrowing for me.»

St. Nikoloz Dvali was tortured to death on Tuesday, October 19, in the year 1314. The Georgian Church continues to commemorate him on that date.

While beseeching their protection, the Church honors the holy fathers Prokhore, Luka, Nikoloz, and all the God-fearing fathers who labored at Jerusalem’s Georgian monasteries and by their righteous lives ascended to heaven. Through the prayers of our holy fathers, LordJesus Christ our God, have mercy on us and save us!

Sources: Lives of the Georgian saints by Archpriest Zakaria Machitadze, translated from the Georgian by David and Lauren Elizabeth Ninoshvili, edited by Lado Mirianashvili and the St. Herman of Alaska Brotherhood, 1st ed., 2006.