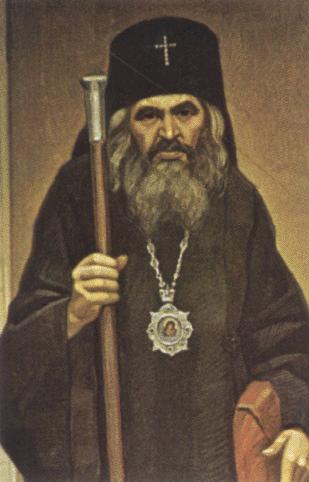 Archbishop John was born on June 4, 1896, in the village of Adamovka in the province of Kharkov in southern Russia. He was a member Maximovitch family, to which St. John of Tobolsk also had belonged. His father, Boris, was a marshal of nobility in one part of Kharkov province; and his uncle was rector of Kiev University. He received at baptism the name of Michael, his heavenly protector being the Archangel Michael. He was a sickly child and ate little.

In 1924 Vladika was ordained reader in the Russian church in Belgrade by Metropolitan Anthony, who continued to exert great influence over him; and Vladika in his turn showed the utmost respect and devotion to his superior. In 1926 Metropolitan Anthony tonsured him a monk and ordained him hierodeacon in the Milkov Monastery, giving him the name John, after Vladika’s own distant relative, Saint John Maximovitch of Tobolsk. On November 21 of the same year Vladika was ordained hieromonk by Bishop Gabriel of Chelyabinsk. From 1925 to 1927, Vladika was an instructor of religion at the Serbian State High School, and from 1929 to 1934 he was a teacher and tutor at the Serbian Seminary of St. John the Theologian at Bitol. There he served the Divine Liturgy in Greek for the local Greek and Slavic communities, who had the greatest esteem for him.

The city of Bitol was in the diocese of Okhrida, and at that time the ruling bishop of this diocese was Nicholas Velimirovitch, a Serbian Chrysostom, a noted preacher, poet, writer, and organizer and inspirer of the popular religious movement. He, as much as Metropolitan Anthony, valued and loved the young Hieromonk John, and himself exerted a beneficial influence upon him. More than once he was heard to say, “If you wish to see a living saint, go to Bitol to Father John. ” …

For, indeed, it began to become evident that this was an entirely extraordinary man. It was his own students who first discovered what was perhaps Vladika’s greatest feat of asceticism. They noticed at first that he stayed up long after everyone else had gone to bed; he would go through the dormitories at night and pick up blankets that had fallen down and cover the unsuspecting sleepers, making the Sign of the Cross over them. Finally it was discovered that he scarcely slept at all, and never in a bed, allowing himself only an hour or two each night of uncomfortable rest in a sitting position, or bent over on the floor praying before icons. Years afterward he himself admitted that since taking the monastic vows he had not slept lying in a, bed….

In 1934 it was decided to raise Hieromonk John to the rank of bishop….Vladika was assigned to the diocese of Shanghai….Vladika arrived in Shanghai in late November, on the Feast of the Entrance of the Mother of God into the Temple, and found a large cathedral uncompleted and a jurisdictional conflict to resolve. The first thing he did was to restore Church unity. He established contact with Serbs, Greeks, Ukrainians….

Vladika himself gathered sick and starving children off the streets and dark alleys of Shanghai’s slums. Beginning with eight children, the orphanage later housed up to a hundred children at one time, and some 3500 in all. When the Communists came, Vladika evacuated the whole orphanage, first to an island in the Philippines, and then to America….

It soon became apparent to his new flock that Vladika was a great ascetic. The core of his asceticism was prayer and fasting. He ate once a day at 11 p.m. During the first and last weeks of Great Lent he did not eat at all, and for the rest of this and the Christmas Lent he ate only bread from the altar. His nights he spent usually in prayer, and when he finally became exhausted he would put his head on the floor and steal a few hours of sleep near dawn. When the time would come to serve Matins, someone would knock on the door, to no avail; they would open the door and find Vladika huddled on the floor in the icon corner, overcome by sleep. At a tap on the shoulder he would jump up, and in a few minutes he would be in church for services-cold water streaming down his beard, but quite awake….

Vladika wore clothing of the cheapest Chinese fabric, and soft slippers or sandals, always without socks no matter what the weather. He often went barefoot, sometimes after having given his sandals away to some poor man. He even served barefoot, for which he was severely criticized….

With the coming of the Communists, the Russians in China were forced once again to flee, most of them through the Philippine Islands. In 1949 approximately 5000 Refugees from the Chinese mainland were living in an International refugee Organization camp on the island of Tubabao in the Philippines. This island is located in the path of the seasonal typhoons which sweep through that part of the Pacific. During the 27 month period of the camp’s occupancy, the island was threatened only once by a typhoon, and it changed course and bypassed the island.

When the fear of typhoons was mentioned by one Russian to the Filipinos, they replied that there was no reason to worry, because “your holy man blesses your camp from four directions every night. ” They referred to Vladika John; for no typhoon struck the island while he was there. After the camp had been almost totally evacuated and the people resettled elsewhere (mainly in the U.S.A. and Australia), and only about 200 persons were left on the island, it was struck by a terrible typhoon that totally destroyed the camp.

Vladika himself went to Washington, D. C., to get his people to America. Legislation was changed and almost the whole camp came to the New World – thanks again to Vladika. …

Vladika remained true to the end to his path of faithful service to the Church. To those who knew him in his last years perhaps two aspects of his character stood out. First was his strictness in what regarded the Church and the law of God. He insisted on the proper deportment of Church servers, allowing no levity, or even talking, in the altar. Himself an expert in Divine services, he would correct errors and omissions in the order of service immediately. With the congregation, too, he was strict, allowing no women to kiss the cross or icons while wearing lipstick, and requiring that the antidoron distributed at the end of the Liturgy be received fasting. He spoke against the desecration of the eves of Sundays and feast days by the organization of balls and other entertainment’s on them. He staunchly defended the Church (Julian) Calendar against new calendar innovators. He forbade his clergy to participate in “Pan Orthodox” services because of the dubious canonicity of some participants; and the activities of Orthodox “ecumenists” caused him to shake his head in disbelief. He was strictest of all with regard to the holy doctrine of Orthodoxy; while he was still a young bishop in Shanghai his critical essay on the “Sophiology” of Archpriest S. N. Bulgakov was instrumental in the Synod’s condemnation of the latter’s heresy in 1936. No one who has seen will soon forget Vladika’s fierce look while lowering the pontifical candlesticks at the proclamation of the Anathemas against heretics on the Sunday of Orthodoxy – here he was one with the Church in excluding from her bosom all who reject the full and saving Orthodox faith. All this was not from any narrow – minded literalness or “fanaticism, ” but from the same fear of God which Vladika preserved his whole life long, and which prohibits one from trespassing against God’s law at the peril of one’s salvation. …

Again, on the evening before his departure for Seattle, four days before his death, Vladika astonished a man for whom he had just served a moleben with the words, ” You will not kiss my hand again. ” And on the day of his death, at the conclusion of the Divine Liturgy which he celebrated, he spent three hours in the altar praying, emerging not long before his death, which occurred at 3:50 p. m. on July 2 (June 19, OS), 1966. He died in his room in the parish building next to the church, without preparatory signs of any illness or affliction. He was heard to fall and, having been placed in a chair by those who ran to help him, breathed his last peacefully and with little evident pain, in the presence of the miracle working Kursk Icon of the Sign. Thus was Vladika found worthy to imitate the blessed death of his patron, St. John of Tobolsk.

For more details about his life visit http://www.saintjohnwonderworker.org/lifeidx.htm