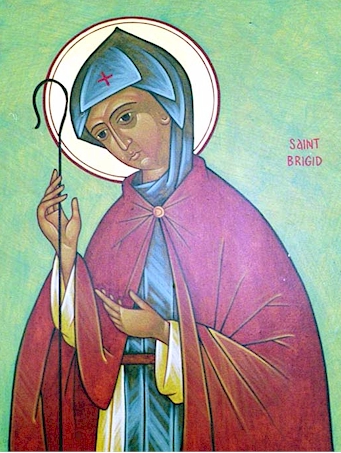 According to tradition, Saint Brigid (Brigit, Bridget) was born at Fochart (or Fothairt), near Dundalk of County Louth in Ulster, of a noble Irish family, which had been converted by Saint Patrick (17 Mar.). A wonderful striving for virtue was seen in her from her earliest years. Being uncommonly beautiful, she had many suitors and her father tried to marry her to the King of Ulster. At the age of sixteen, she implored Our Lord Jesus Christ, whom alone she desired as her spouse, to make her unattractive, so that no longer would anyone want to marry her. Her prayer was heard; she lost an eye, and was allowed to enter a monastery. However, on the very day that she took the veil, she was miraculously healed and recovered her original loveliness, which was now set off by spiritual beauty.

Some miles from Dublin she was granted possession of a plain called the Curragh, where she built herself a cell under a large oak tree, thence called Kill-dara, or Cell of the oak. Seven other girls soon placed themselves under her direction establishing the monastery of Kill-dara, which gave its name to the later cathedral city of Kildare. The community grew rapidly thanks to the renown of the holy Abbess, and became a double monastery, with the Abbess ranking above the Abbot, and branched out into several others all over Ireland.

Saint Brigid was often journeying to visit these foundations, and she wrought miracles everywhere along her way. She drove out demons simply by the sign of the Cross; she healed the sick, converted sinners, and her presence inspired love of God in the whole people. All the leading people of the day knew her and presented her with tokens of their admiration.

Having predicted the day of her decease, she fell asleep in peace on 1 February 524, bequeathing to her disciples a monastic Rule, which epitomized her teaching. She is regarded, on a par with Saint Patrick, as patroness of Ireland, and is venerated there as a Saint, second only to the Mother of God. During the Middle Ages the veneration of Saint Brigid spread throughout Europe.

Through the prayers of Thy Saints, Lord Jesus Christ, have mercy upon us. Amen.

Source: The Synaxarion, The lives of the Saints of the Orthodox Church, Volume three, Holy convent of the Annunciation of Our Lady, Ormylia, 2001.