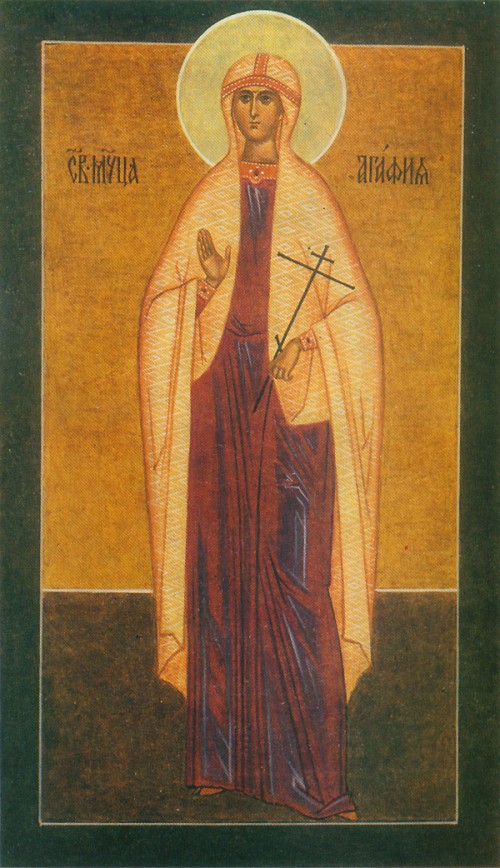 On the 5th of the month, we keep the Memory of the Holy Martyr AGATHA

Saint Agatha, one of the most renowned Martyrs of the West, was born into a noble family at Catania in Sicily.1 From early youth, she consecrated herself to the Lord and worked at heightening her rare beauty with the most precious adornment of the true Faith and the holy virtues. At the time of her arrest, during the persecution under Decius (251), she was no more than fifteen. The Prefect Quintinian was greatly taken by her beauty when she appeared at his tribunal, and as he was interested in getting possession of her riches, he offered to marry her. On being refused, he sent her to live for a month with Aphrodisia, a woman of corrupt life, who used all her wiles to persuade Agatha to accept him. But the young girl was unmoved by the glamour of worldly pleasures, and Aphrodisia admitted herself defeated, saying that it would be easier to change the nature of iron or stone than Agatha’s resolve, firmly based as it was on the unshakeable rock of the Faith. When she was again brought to the tribunal, Quintinian said,

-‘Since you are of noble birth, why are you behaving like a slave?’

-‘Because I am a slave of Christ,’ she replied, ‘and slaves of Christ are really the freest of all creation because they have acquired self-mastery by His grace.’ Since she persisted in mocking the gods which he urged her to worship, the Prefect slapped her face and put her in prison while he decided what torments to inflict on her.

The next day, she was ordered to sacrifice if she wanted to save her life, but she replied that we are saved only by Christ the Son of the living God. She was stretched on a frame and beaten, then lacerated with iron claws and her wounds were seared with flaming torches.

-‘These torture are a great joy to me,’ she exclaimed to the fury of the Prefect. ‘Corn does not reach the granary until threshed and winnowed, and my soul cannot attain everlasting blessedness until separated by sufferings from my body’ Quintinian ordered the torturers to cut off her breasts and to throw her, bleeding, into a dungeon. But at dead of night her Guardian Angel brought the Apostle Peter in the midst of a brilliant light, and he healed all her wounds.

Quintinian had Agatha brought before his tribunal for a fourth time. He was unimpressed by her miraculous recovery, and he ordered her to be stripped of her clothing and rolled on a bed of potsherds and burning coals. Suddenly the entire city was shaken by an earthquake, and part of the palace collapsed. The terrified populace stormed into the praetorium and threatened to burn Quintinian in the remains of his palace unless he released the holy Martyr, thus avenged by God. Her tormentors were laid off and the Saint was returned to prison. She begged the Lord, who had granted her the grace of steadfastness under torture, to grant her now to see the glory of His Face, and so she gave up her soul to God.

When the people heard the news, they hurried to the prison with myrrh and sweet spices for her burial. Just as they were placing Saint Agatha’s body in a porphyry sarcophagus, her Guardian Angel appeared in the city as a shining youth attended by a hundred white-clad children. He placed an inscribed marble tablet on the tomb, which read: ‘Holy devoted soul. Honour of God. Protection of the Land.’ The Angel then disappeared.

As for the wicked Quintinian, he never got his hands on Saint Agatha’s property, for he was thrown from his chariot into a river when his horses bolted, and was drowned. On the first anniversary of Agatha’s death, Mount Etna erupted and Catania was on the brink of being engulfed by a stream of lava. Christians and pagans alike rushed to the Saint’s tomb, lifted the veil from the sarcophagus and bore it like a shield to confront the river of fire, which stopped immediately The same miracle has been repeated many times in the course of the centuries, and hence Saint Agatha is fervently venerated by the people of Catania as the patroness of their city, and she is honoured as much in the East as in the West.

Source: The Synaxarion, Vol. 3, Holy Convent of the Annunciation of Our Lady, Ormylia.