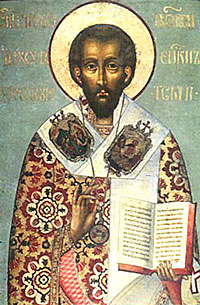 Saint Tikhon was a miracle-worker. Following the death of Blessed Mnemonius, Tikhon was unanimously elected a bishop and consecrated by the renowned Epiphanius for the Diocese of Amathus. His purity of life and zeal for Orthodoxy recommended him for this office. There were still pagans on Cyprus at that time. With apostolic zeal St. Tikhon undertook to convert the unbelievers into believers. In that, he had great success. After lengthy labor in the vineyard of the Lord, Tikhon took up habitation in blessed eternity about the year 425 A.D. He was called a miracle-worker because of the many miracles he worked during his life. Tikhon’s father was a baker. When his father left him alone in the store, he would distribute bread free of charge to the poor. Once, his father reproached him for this. Tikhon prayed to God and their granary was so filled with wheat that the door could not be opened without difficulty. Again, at another time, he planted withered branches of a vine and the vine became green and, in due time, brought forth fruit.

2. THE HOLY MARTYRS TIGRIUS AND EUTROPIUS 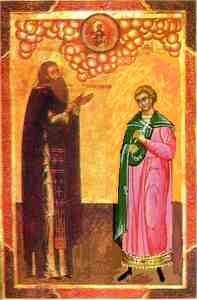 Tigrius and Eutropius were among the clergy of St. John Chrysostom. When evil men banished Chrysostom from Constantinople, the cathedral church [Hagia Sophia] was set on fire and a flame rose from it and fell upon the houses of the persecutors of this beacon of the Church. The people saw the finger of God in that but the enemies of Chrysostom attributed this fire to his adherents. Many of those who were accused suffered bitterly because of that, among them Tigrius, the presbyter and Eutropius, the reader. Optatius, the mayor of the city, an unbaptized Greek with particular malice, began a pursuit for Chrysostom’s followers. Tigrius, in his youth, was a slave of a wealthy man who castrated him. Freeing himself of slavery, he dedicated himself completely to the service of the Church and in this service shone as a shining ray. Optatius subjected this “meek, humble, charitable and hospitable” man to great tortures and then banished him into exile to Mesopotamia where he died in prison. Eutropius, chaste from birth, pure, blameless and kind was beaten by oxen whips and by canes and finally hanged. When Christians took his body to bury it, sweet angelic singing was heard in the air.