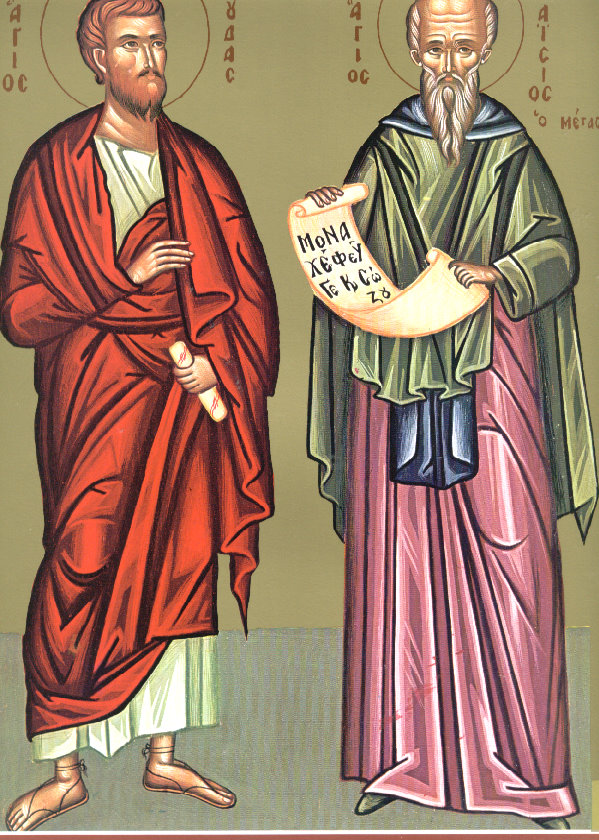 Saint Jude was one of the Twelve Apostles. He was the son of Joseph and Salome and the brother of James, the brother of the Lord. With Salome, the daughter of Angeja the son of Varahina, the brother of Zacharias, Joseph the carpenter had four sons: James, Hosea, Simon and Jude. This Jude is sometimes called: “Jude, the brother of James” because of his more famous brother (St. Luke 6:16 Acts 1:14). St. Jude begins his epistle in this manner: “Jude, the servant of Jesus Christ and the brother of James” (St. Jude 1:1). Even though he could be called the brother of the Lord as much as James, he did not do this out of humility and shame for, in the beginning, he did not believe Christ the Lord. When the elder Joseph, before his death, wanted to leave a portion of his estate to Jesus as well as to his other children, all of them protested this, even Jude, only James voluntarily set aside a share of his portion and intended it for Jesus. Jude is also called Levi and Thaddeaus. There is another Thaddeaus of the Seventy Apostles (August 21) but this Thaddeaus or Jude was one of the Great Apostles. Jude preached the Gospel throughout Judea, Samaria, Galilee, Idumedia, Syria, Arabia, Mesopotamia and Armenia. In Edessa, the town of Abgar, he augmented the preaching of the other Thaddeaus. When Jude preached throughout the regions around Ararat he was captured by pagans, crucified on a cross and killed by being shot throughout with arrows to eternally reign in the Kingdom of Christ.

Paisius was an Egyptian by birth and nationality. After a vision in a dream, his mother dedicated him to the service of God. As a young man, Paisius came to the Venerable Pambo who received him as his disciple and he was a co-disciple of Venerable John Kolovos [The Short] who wrote the biography of Paisius. To the joy of his spiritual father, Paisius exerted labor after labor and mortification after mortification. Many times the Prophet Jeremiah, whom he especially loved and often read, appeared to him; even the angels of God often appeared to him; even the Lord Christ Himself appeared to him. “Peace be with you my beloved chosen one!” the Lord Christ said to him. By the great grace of God, Paisius possessed the special gift of abstaining from food. Often he did not taste bread for fifteen days, more often for a week and once, in the witness of St. John the Short, he went for seventy days without partaking of anything. He waged a great struggle with the spirits of evil, who appeared to him at times exactly as they are and, at times in the form of radiant angels. But the blessed servant of God did not permit himself to be deceived and fascinated. Paisius was famous throughout Egypt as a discerner and miracle-worker. He took up habitation in eternity in the year 400 A.D. The Venerable Isidore of Pelusium translated the relics of Paisius to his monastery and honorably buried them.