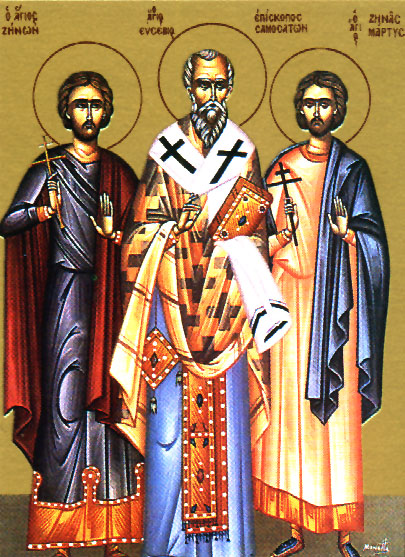 1. THE PRIESTLY-MARTYR EUSEBIUS, BISHOP OF SAMOSATA

Eusebius was a great exposer of Arianism. When the throne of Antioch became vacant, Meletius was elected patriarch at the insistence of Eusebius. Meletius was a great beacon of the Church who, after his death, was found worthy of great praise by St. John Chrysostom. However, the Arians quickly banished Meletius from Antioch.

When Constantine’s pernicious son Constantius died another much worse than he was crowned, Julian the Apostate. During the time of Julian’s persecution of Christians, St. Eusebius removed his clerical attire and donned a soldier’s uniform so that, under the guise of a soldier, he visited the persecuted Church throughout Syria, Phoenicia and Palestine strengthening the Orthodox Faith everywhere and installing the necessary priests and deacons and other clergy and, in some places, bishops. Following the stormy death of Julian, St. Eusebius counseled Meletius to convene a Council in Antioch in 361 A.D. at which twenty-seven hierarchs were present and the Arian heresy was condemned once more and the Faith of Orthodoxy was proclaimed in the same manner as it was expressed at the First Ecumenical Council [Nicea 325 A.D]. Along with Meletius and Eusebius, St. Pelagius of Laodicea the famous ascetic and chaste one, made a great impact at the Council of Antioch. This Council was held during the reign of the pious Emperor Jovian. However, Emperor Jovian soon died and the wicked Valens was crowned and again the persecution of Orthodoxy ensued. St. Meletius was exiled to Armenia, Eusebius exiled to Thrace and Pelagius exiled to Arabia. After Valens, Gratian was crowned emperor and it was he who granted freedom to the Church and recalled the exiled hierarchs to their former sees. Thus, they returned: Meletius to Antioch, Eusebius to Samosata and Pelagius to Laodicea. At this time, many dioceses and many parishes were widowed and Eusebius zealously hurried to find and to give to the people canonical shepherds. When he came to the town of Doliche to enthrone the newly elected bishop Marinus and to denounce the heresy of Arius, which was strong in this town, a fanatical heretic hurled a ceramic tile at Eusebius’ head and mortally wounded him. This great zealot, saint and martyr of Orthodoxy died to live eternally in the blessedness of Paradise. He suffered in the year 379 A.D.

2. THE HOLY MARTYRS ZENO AND ZENAS

Zeno was a Roman officer in the Arabian town of Philadelphia and Zenas was his servant. When the persecution of Christians began during the reign of Emperor Maximian, St. Zeno boldly appeared before Commander Maximus, confessed his faith in the One Living God and counseled Maximus that, he too, renounce lifeless idols and embrace the only True Faith. The commander became enraged and cast Zeno into prison. When the faithful Zenas visited his master in prison, he also was seized and arrested. Both of them were tortured for Christ and finally thrown into the fire that the pagans had doused with oil. Their souls were crowned with wreaths in the Kingdom of Christ and their bodily remains were interred in the Church of St. George at the place called Cyparisson.