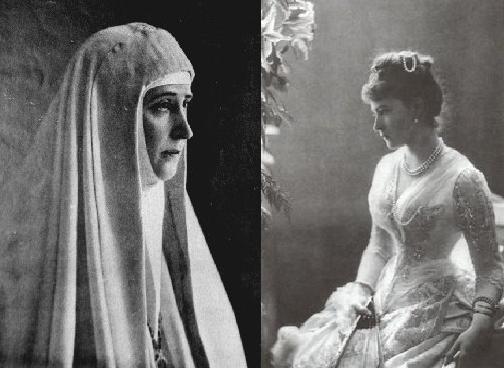 The grand duchess, of her own volition decided to unite herself to the Orthodox Church. When she made the announcement to her spouse, according to the account of one of the servants, tears involuntarily poured from his eyes. The Emperor Alexander III himself was deeply touched by her decision. Her husband blessed her after Holy Chrismation with a precious icon of the Savior, “Not Made by Hands” (a copy of the miraculous icon in the Chapel of the Savior), which she treasured greatly throughout the remaining course of her life. Having been joined to the Faith in this manner, and thereby to all that makes up the soul of a Russian, the grand duchess could now with every right say to her spouse in the words of the Moabite Ruth, “Your people have become my people, and your God my God” (Ruth 1:16).[2]

“Once the decision was reached, it proved a difficult task to make it known to her relatives. She writes to them at this time that she is “intensely happy,” but that it pains her to cause grief to her beloved family. And yet her determination was firm, “I am sure God’s blessing will accompany my act which I do with such fervent belief, with the feeling that I may become a better Christian and be one step nearer to God.” Explaining the reasons for her decision, she writes in a letter: “Above all one’s conscience must be pure and true… many will — I know — scream about (it), yet I feel it brings me nearer to God… You tell me that the outer brilliance of the church charmed me… in that you are mistaken — nothing in the outer signs attracted me — no — the service, the service, the outer signs are only to remind us of the inner things.” [3]

The Kaiser is thought to have been behind the claim that her husband had forced her to convert, but Elizabeth explained that it would be “lying before God” to “remain outwardly a Protestant.” [4] Of all her family, Queen Victoria showed the most understanding, and provided her with moral support for her decision. [5]

“Grand Duchess Elisabeth heard the explosion and felt the shock; she rushed outside and saw the dismembered body of her husband strewn around the square. She knelt in the snow and helped collect the remains and, almost incredibly found the strength to arrange for the transportation to a hospital of the grand duke’s coachman, who had been severly wounded. Visiting the dying man later, she told him that the grand duke was well and safe, and had in fact sent her, enabling the man to die peacefully.”[6]

“The lofty spirit with which she took the tragedy astounded everyone: she had the moral strength even to visit in prison her husband’s assassin, Kaliaev, hoping to soften his heart, with her Christian forgiveness. ‘Who are you?’ he asked upon meeting her. ‘I am his widow,’ she replied, ‘why did you kill him?’ ‘I did not want to kill you,’ he said. ‘I saw him several times before when I had the bomb with me, but you were with him and I could not bring myself to touch him.’ ‘You did not understand that by killing him you were killing me,’ she said. Then she began to talk of the horror of his crime before God. The Gospel was in her hands and she begged the criminal to read it and left it in his cell. Leaving the prison, the Grand Duchess said: ‘My attempt was unsuccessful, but, who knows, perhaps at the last minute he will understand his sin and repent.’ “[7]