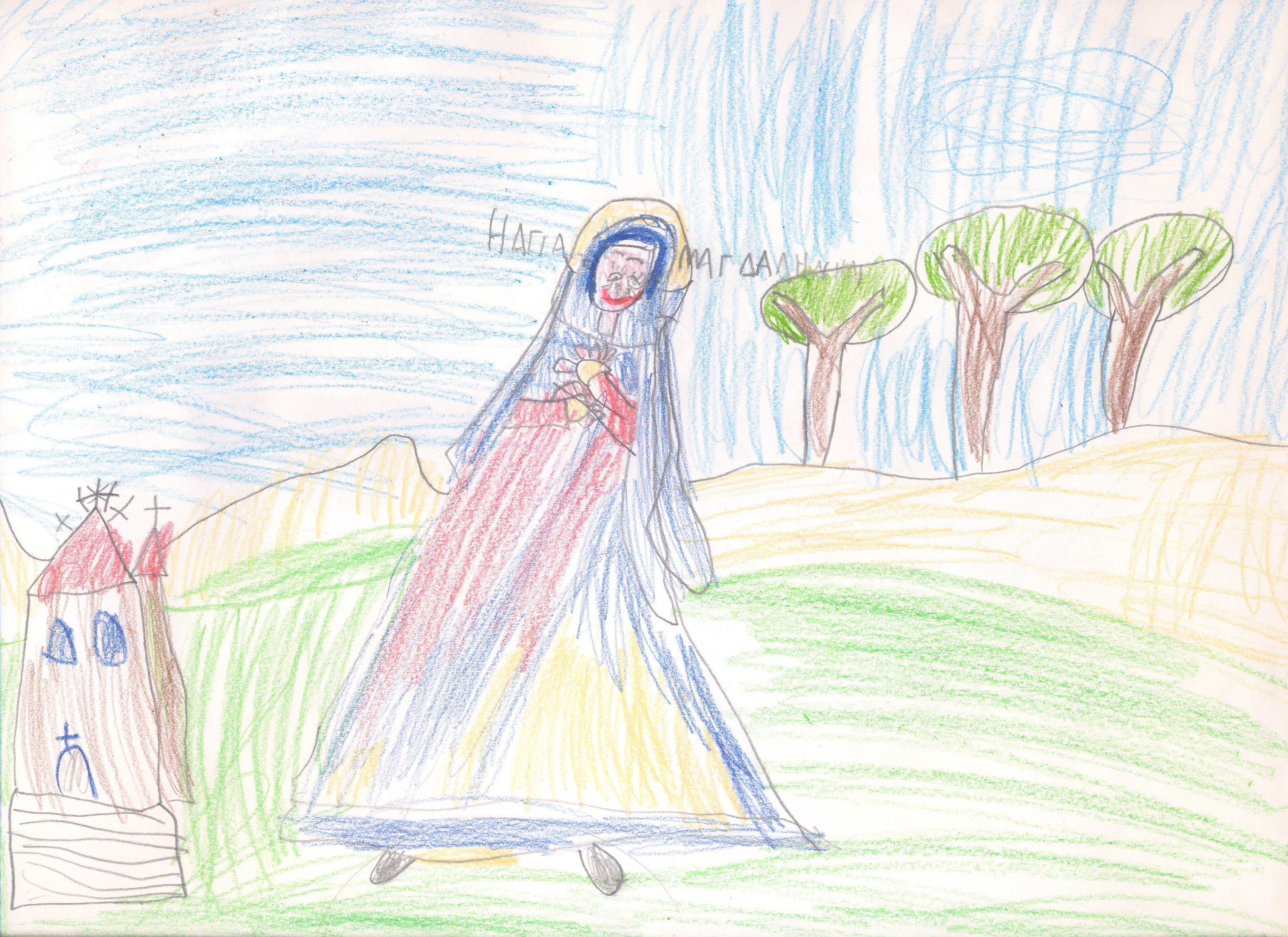 Mary Magdalene was one of the myrrh-bearing women and “equal to the apostles”. She was born in the town of Magdala along the shore of Lake Gennesaret and was from the tribe of Issachar. She was tormented by seven evil spirits from which the Lord Jesus freed her and made her whole. She was a faithful follower and servant of the Lord during His earthly life. Mary Magdalene stood beneath the Cross on Golgotha and grieved bitterly and mourned with the All-Holy Birth-giver of God. After the death of the Lord she visited His sepulchre three times. When the Lord resurrected she saw Him on two occasions: once alone and the other time with the other myrrh-bearing women. She traveled to Rome and appeared before Tiberias Caesar and presenting him with a red colored egg, greeted him with the words: “Christ is Risen!” At the same time, she accused Pilate before Caesar for his unjust condemnation of the Lord Jesus.

Caesar accepted her accusation and transferred Pilate from Jerusalem to Gaul where, this unjust judge, in disfavor with the emperor, died of a dread disease. After that, Mary Magdalene returned from Rome to Ephesus to St. John the Theologian whom she assisted in the work of preaching the Gospel. With great love toward the resurrected Lord, and with great zeal, she proclaimed the Holy Gospel to the world as a true apostle of Christ. She died peacefully in Ephesus and, according to tradition, was buried in the same cave in which seven youths were miraculously put to sleep for hundreds of years and, after that, were brought to life and then died (August 4). The relics of St. Mary Magdalene were later transferred to Constantinople. There is a Russian Orthodox convent dedicated to St. Mary Magdalene near the Garden of Gethsemane.

From “The Prologue from Ohrid”

O holy Mary Magdalene, thou didst keep Christ’s commandments/ and follow Him Who for our sakes was born of a Virgin./ Today we celebrate thy memory/ and receive forgiveness through thy prayers.

With others standing before the Savior’s Cross,/ weeping and suffering with the Mother of God,/ glorious Mary Magdalene offered praises saying:/ What is this strange wonder?/ He chooses to suffer Who upholds the whole creation!/ Glory to Thy Power.

Click here and here for two icons of St. Mary Magdelene. The first is a contemporary traditional Greek icon depicting her (left) beside St Marcella of Chios (right), who is celebrated on the same day (July 22), while the second is a detail from an engraving from 1870 depicting the Holy Monastery of Simonopetra on Mount Athos (where her left hand is kept, which is supernaturally whole and people who kiss it find it to be warm).