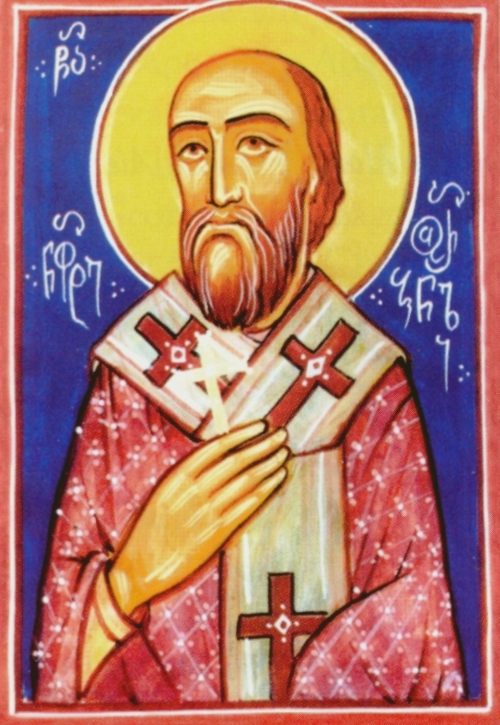 The holy hieromartyr Neopite of Urbnisi descended from a line of Persian fire-worshippers.

In the 7th century, by order of the Saracen emir Mumni (Mu’min), the military leader Ahmad attacked Georgia with an enormous army. After overrunning the central part of Shida (Inner) Kartli, Ahmad dispatched two of his commanders, Omar and Burul, to the capital city of Mtskheta. At the confluence of the Mtkvari and Aragvi rivers, across from the village of Tsikhedidi in the rocky Sarkineti region, the invaders discovered a group of caves and plotted to occupy them. They tried to cross the Mtkvari but were unable.

Having suffered a setback, the enemies asked their captives what was located in those caves. They were told that this was the Shio-Mgvime Monastery, where dwelt God’s chosen, who had deprived themselves of every earthly blessing.

Surprised at this reply, the commanders decided to pass this information on to Ahmad. Then, as though it were commonplace, Ahmad sent Omar to the monastery to ask the monks to pray for him and remember him at the grave of their abbot, St. Shio. “Pray for me, Ο slaves of God, and accept these gifts of aloe and incense. Offer these as a sacrifice to your abbot,” he told them.

Approaching the monastery caves, Omar sent a messenger to inform the monks that he was coming to them in peace and bearing gifts. Drawing near to the monastery gates, the commander saw an army of incorporeal hosts descending from the heavens and among them an elder, radiant with a great light.

The meek and modest behavior of the monks left a great impression on Omar. He soon understood that the strange armies he had seen on the steps of the monastery were angels of God and that the elder was St. Shio of Mgvime, abbot of the monastery. He related his vision to the monks and vowed to return to them, receive the sacrament of Holy Baptism, be tonsured a monk, and remain there to join in their holy labors.

Soon Omar abandoned all his possessions, his military rank, and his wealth and was baptized in the Christian Faith at the Shio-Mgvime Monastery as he had promised. Two of his slaves were baptized with him as well. Omar received the new name Neopite (Newly Planted)[1], and his slaves became Kristodule (Christ’s Slave) and Kristepore (Christ-bearer).

According to God’s will, St. Neopite was consecrated bishop of Urbnisi, and all were amazed at his wisdom and steadfastness. He was a true father to his flock: “He strengthened the weak, healed the sick, raised the fallen, cleansed the possessed, directed the lost and sought out those who were perishing, protecting them, and forbidding them to wander off again.”

But the enemy could not tolerate the native Persian’s apostolic ac-tivity, and he convinced the fire-worshippers to kill the Christian shep-herd. So the unbelievers devised an ambush and attacked Neopite’s isolated cell, then tied him up and began to mock, curse, and revile him. They knew that St. Neopite longed to become like the holy protomartyr Stephen, and they plotted to stone him to death.

When his time to depart this world had arrived, St. Neopite turned to his persecutors with a tender voice, saying, “Sweet is death to me, Ο unbelievers! Sweet it is to me. I desire to sunder the link between my mortal and immortal nature…. With my own blood I will confirm the Holy Church, which is founded upon the Precious Blood of the Son and Word of God, Whom I preach. May that which was foreordained for me by the Providence of God be fulfilled, for He has called me to His light from the depths of ungodliness!”

The furious pagans stoned the saint to death. With his last breath Holy Hieromartyr Neopite cried out, “Lord Jesus Christ receive my soul!”

With hymns we praise the newly phnted one, the Holy Neopite, who was stained red with his own blood. Ο Honorable Father, pray to Him Who has crowned thee, for the undisturbed peace of His Holy Church!

1. From the Greek word neophytos, which in I Tim. 3:6 refers to a new convert.

Sources: Lives of the Georgian saints by Archpriest Zakaria Machitadze, translated from the Georgian by David and Lauren Elizabeth Ninoshvili, edited by Lado Mirianashvili and the St. Herman of Alaska Brotherhood, 1st ed., 2006.