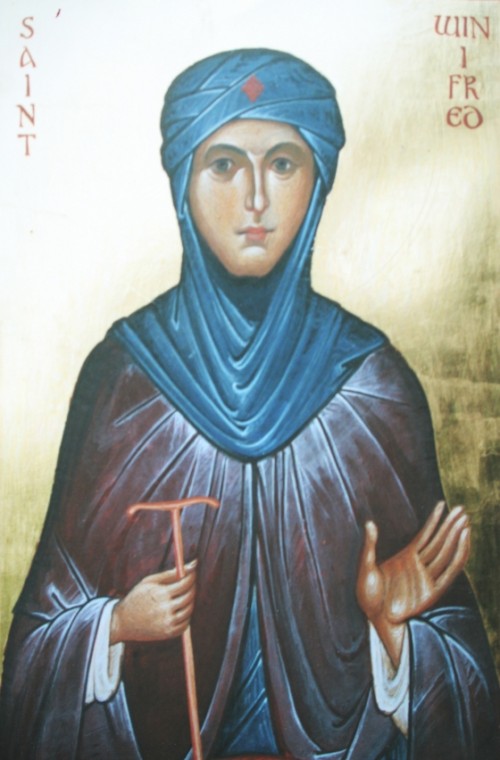 After the death of Saint Beuno, Saint Wenefride left Holy-Well, and after putting herself for a short time under the direction of Saint Deifer, entered the nunnery of Gutherin in Denbighshire, under the direction of a very holy abbot called Elerius, who governed there a double monastery. After the death of the abbess Theonia, Saint Wenefride was chosen to succeed her. Leland speaks of Saint Elerius as follows: “Elenus was anciently, and is at present in esteem among the Welsh. I guess that he studied at the banks of the Elivi where now Saint Asaph’s stands. He afterwards retired in the deserts. It is most certain that he built a monastery in the vale of Cluide, which was double, and very numerous of both sexes. Among these was the most noble virgin Guenvrede, who had been educated by Beuno, and who suffered death, having her head cut off by the furious Caradoc.” Leland mentions not the stupendous miracles which Robert of Salop and others relate on that occasion, though in the abstract of her life inserted in an appendix to the fourth volume of the last edition of Leland’s Itinerary, she is said to have been raised to life by the prayers of Saint Beuno. In all monuments and calendars she is styled a martyr: all the accounts we have of her agree that Caradoc, or Cradoc, son of Alain, prince of that country, being violently fallen in love with her, gave so far way to his brutish passion, that finding it impossible to extort her consent to marry him, or gratify his desires, in his rage he one day pursued her, and cut off her head, as she was flying from him to take refuge in the church which Saint Beuno had built at Holy Well. Robert of Shrewsbury and some others add, that Cradoc was swallowed up by the earth upon the spot; secondly, that in the place where the head fell, the wonderful well which is seen there sprang up, with pebble stones and large parts of the rock in the bottom stained with red streaks, and with moss growing on the sides under the water, which renders a sweet fragrant smell; and thirdly, that the martyr was raised to life by the prayers of Saint Beuno, and bore ever after the mark of her martyrdom by a red circle on her skin about her neck. If these authors, who lived a long time after these transactions, were by some of their guides led into any mistakes in any of these circumstances, neither the sanctity of the martyr nor the devotion of the place can be hereby made liable to censure. Saint Wenefride died on the 22nd of June, as the old panegyric preached on her festival, mentioned in the notes, and several of her lives testify: the most ancient life of this saint, in the Cottonian manuscript, places her death, or rather her burial at Guthurin on the 24th of June. The words are: “The place where she lived with the holy virgins was called Guthurin, where sleeping, on the eighth before the calends of July, she was buried, and rests in the Lord.” Her festival was removed to the 3rd of November, probably on account of some translation; and, in 1391, Thomas Arundel, archbishop of Canterbury, with his clergy in convocation assembled, ordered her festival to be kept on that day throughout his province with an office of nine lessors, which is inserted in the Sarum Breviary. The time when this saint lived is not mentioned in any of her lives: most, with Alford and Cressy, think it was about the close of the seventh century. Her relics were translated from Guthurin to Shrewsbury in the year 1138, and deposited with great honor in the church of the Benedictine abbey which had been founded there, without the walls, in 1083, by Roger earl of Montgomery. Herbert, abbot of that house, procured the consent of the diocesan, the bishop of Bangor, (for the bishopric of Saint Asaph’s, in which Guthurin is situated, was only restored in 1143,) and caused the translation to be performed with great solemnity, as is related by Robert, then prior of that house, (probably the same who was made bishop of Bangor in 1210,) who mentions some miraculous cures performed on that occasion to which he was eyewitness. The shrine of this saint was plundered at the dissolution of monasteries.