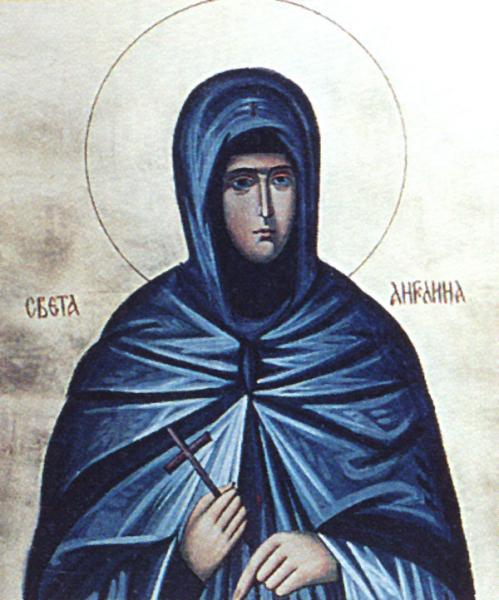 In the years that followed they had two sons, George and John. When they had grown up, the peace of that country was destroyed by the invasion of the Turks who began killing people with no regard to age or sex. Wherefore Stephen, with his wife Angelina and his two sons, fled to Italy where he lived out the remaining portion of his life until his repose in 1468. Angelina was left a widow. In her poverty she turned to the Hungarian ruler for help. He showed mercy and gave them the town of Kupinovo in Sirmie. So in l486 she came from Italy with her two sons, bearing the incorrupt body of her saintly husband, which she buried there in his Serbian homeland. The two sons also became saints. The first-born, George, gave his title as ruler to his younger brother John and became a monk by the name of Maxim; John was married but had no sons and died in 1503 when he was not yet old. His life was full of good works and it pleased the Lord to glorify him by working miracles through trace bestowed on his relics. Thus, her husband and both of her sons died during Angelina’s lifetime. Already old and having drunk the cup of sorrow she took upon herself the “angelic way of life,” and followed the rule of prayer as a nun for the salvation of her soul. When her time came she died quietly in the Lord, and was buried in one tomb with her sons in the church of the monastery of Krushedol in Frushka Gora, where to this day there is a service every year in her memory.