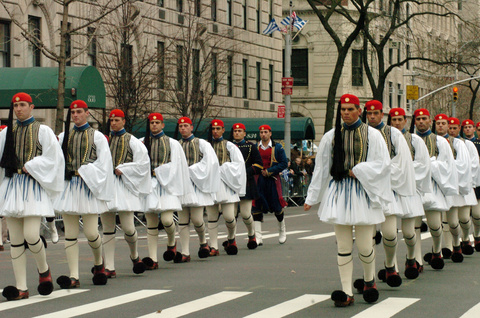 NEW YORK-The Cyprus Action Network of America (CANA) is pleased to report that Hellenic Revolution day was celebrated early this year in a get together in Brooklyn, New York together with the Phil-Hellenes of Nuovo Patria Meridionale (New Southern Homeland), along with the growing Hellenic League of America HLA. The celebration of Hellenic Revolution was a historic happening , made public through face book with the call by Hellenic League of America HLA Leader Ioannis Fidanakis to “join us as we start celebrating Hellenic Independence Day alittle early this year. Rather then waiting until the official date of March 25th, we’ve decided to follow in the foot steps of those revolutionaries that just couldn’t wait to taste freedom and began the war of liberation with the seige of Kalamata on March 21 1821.” The report on the HLA celebration in Brooklyn last Saturday , written by Giovanni di Napoli, is quoted below, following a statement by CANA leader Nikolaos Taneris and HLA Leader Ioannis Fidanakis. Today, we stand united in remembering our National progenitors , the Hellenic Revolutionaries who in Mani, my mother’s land, set forth to begin a liberation struggle against the most barbaric oppressors that have every stained human history, the Turks and their Ottoman Empire. The entire countryside was up in arms, and even women and the elderly did their part to march to face an enemy with a seemingly endless supply of men and ammunition from the depths of Asia and North Africa.

The lessons of 1821 were the same lessons our Nation learned in the Balkan Wars , in the Struggles against the Persians in Ancient times, and the 1897 war for Cretaan independence and the EOKA struggle of 1955-1959-it is that it’s not a “securitate” of paid mercenaries and hired security forces that ever won our struggles. Our struggles were fought and won by the Hellenic people, who with indomitable spirit and sacrifice stood up for our Nation, our homes, our land, our family, our history our way of life.

The Mass Murderer of Hellenism in Asia Minor, the so-called “Ataturk” was quoted as saying “the only thing we have to fear is if the Greeks ever unite” The barbarians know that the allure of riches and comforts, will always turn a few nightmares, like the ancient “Efialtes” who will side with the enemy for he cannot live up to the Hellenic glory that comes from self less sacrifice.

Today those Efialtes are prevelant in the establishment that looks the other way as Turks penetrate Aegean air space every single day, as Turks spend millions of dollars in American academia and in Congress’s corridors and worldwide to negate their crimes against Hellenism and all humanity, or make Thrace and Cyprus somehow “Turkish” .

Young Greek-Americans today are allured by the connections and wealth used by the Turks to dazzle and seduce those weak and ineffectual men and women who staff US State Department posts and their allies. The Hellenic world has known many a “Gregory Makris” who do their part to spread Turkish propaganda under the guise of “friendship” , or in the name of “ending the isolation of the Turkish Cypriots” Or of “Terry Netos” or “John Sitilides” and many like them who eat with “silver spoons from both sides”

Our path is the path of resistance. There is no country in recorded history whose borders have remained unchanged. Mighty empires have come and gone. Likewise, the Republic of Turkey will not have the same borders forever. No one knows what can happen in the next 30 years or 300 years, Hellenism we must remind its offspring for generations to come that those lands which were unjustly stolen from them will eventually return to their rightful owners.

The just demand for the recovery of our historic lands can disappear once Hellenes lose all hope and unilaterally give up their dream. This is why we struggle to keep alive the Remembrance of the Crime of Turkish Invasion in Cyprus every July 20th, this is why in Washington DC we protest outside the gates of Turkish Embassy this year, for the third year in a row, we must join with our brothers in London, in Athens and in free Cyprus to demand “TURKEY HANDS OFF CYPRUS”

The thousands of missing people, the graves from the Palekythro massacre, the missing from the village of Strongylos, the dead of Ammochostos of Kyrenia, the 17 who were slaughtered by Turkish Anti-Cypriots and thrown down the well and covered up with rocks near St. Hilarion castle, and all those tied and bound for Adana prison in Turkey, all those who were marched off into Anatolia and used for barbaric scientific experiments by their Turk captors. The families of Solomou and Issac, killed at Dhyrenia in 1996,and the anonymous 19 year old in Cyprus in 1974 whose hands were tied yet he still managed to spit into the face of his murderer– the Turkish TV star Olgac’s face. All our martyrs demand justice.

This is why we celebrate March 25th, 1821, the day marking the Hellenic Revolution because it reminds us that we can win.