What is an Elder?

What is an Elder? 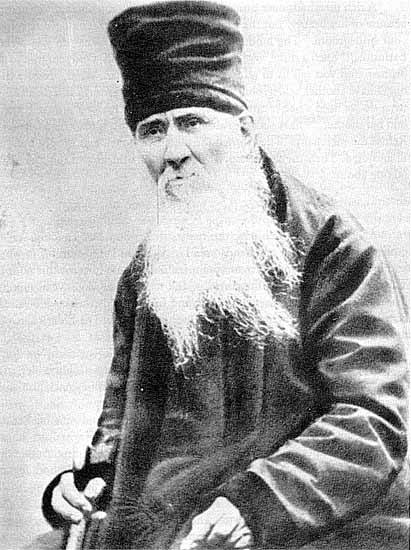 The elder or “old man”, known in Greek as Geron and in Russian as Starets, need not necessarily be old in years, but he is wise in his experience of divine truth, and blessed with the grace of “fatherhood in the spirit”, with the charisma of guiding others on the Way. What he offers to his spiritual children is not primarily moral instruction or a rule of life, but a personal relationship. “A starets” says Dostoevsky, “is one who takes your soul, your will, into his soul and his will.” Fr. Zachariah’s disciples used to say about him, “It is as though he bore our hearts in his hands.”

The starets is the man of inward peace, at whose side thousands can find salvation. The Holy Spirit has given him as the fruit of his prayer and self-denial, the gift of discernment or discrimination, enabling him to read the secrets of men’s hearts; and so he answers, not only the questions that others put to him, but often the questions -often much more fundamental – which they have not even thought of asking. Combined with the gift of discernment he possesses the gift of spiritual healing-the power to restore men’s souls, and sometimes also their bodies. This spiritual healing he provides not only through his words of counsel but through his silence and his very presence. Important though the advice may be, far more important is his intercessory prayer. He makes his children whole by praying constantly for them, by identifying himself with them, by accepting their joys and sorrows as his own, by taking on his shoulders the burden of their guilt or anxiety. No one can be a starets if he does not pray insistently for others.

If the starets is a priest, usually his ministry of spiritual direction is closely linked with the sacrament of confession. But a starets in the full sense, as described by Dostoevsky or exemplified by Fr. Zachariah, is more than just a priest-confessor. A starets in the full sense of the word cannot be appointed such by any superior authority. What happens is that the Holy Spirit speaking directly to the hearts of the Christian people, makes it plain that this or that person has been blessed by God with the grace to guide and heal others. The true starets is in this sense a prophetic figure, not an institutional official. While most commonly a priest-monk, he may also be a married parish priest, or else a lay monk not ordained to the priesthood, or even-but this is less frequent-a nun, or a lay man or woman living in the outside world. If the starets is not himself a priest, after listening to people’s problems and offering counsel, he will frequently send them to a priest for sacramental confession and absolution.

The relation between child and spiritual father varies widely. Some visit a starets perhaps only once or twice in a lifetime, at a moment of special crisis, while others are in regular contact with their starets, seeing him monthly or even daily. No rules can be laid down in advance; the association grows of itself under the immediate guidance of the Spirit.

Always the relationship is personal. The starets does not apply abstract rules learnt from a book- as in the “casuistry” of Counter-Reformation Catholicism-but he sees on each particular occasion this man or woman who is before him; and illumined by the Spirit, he seeks to transmit the unique will of God specifically for this one person. Because of this the true starets understands and respects the distinctive character of each one, he does not suppress their inward freedom but reinforces it. He does not aim at eliciting mechanical obedience, but leads his children to the point of spiritual maturity where they can decide for themselves. To each one he shows his or her true face, which before was largely hidden from that person; and his word is creative and life-giving, enabling the other to accomplish tasks which previously seemed impossible. But all this the starets can achieve only because he loves each one personally. Moreover, the relationship is mutual; the starets cannot neip another unless the other seriously desires to change his way of life and opens his heart in loving trust to the starets. He who goes to see a starets in a spirit of spiritual curiosity is likely to return with empty hands, unimpressed.

Because the relationship is always personal, a particular starets cannot help everyone equally. He can help only those who are specifically sent to him by the Spirit. Likewise the disciple should not say, “My starets is better than all the others.” He should say only, “My starets is the best for me.”

In guiding others, the spiritual father waits upon the will and the voice of the Holy Spirit. “I will give only what God tells me to give,” said St. Seraphim. “I believe the first word that comes to me inspired by the Holy Spirit.” Obviously no-one has the right to act in this manner unless, through ascetic effort and prayer, he has attained an exceptionally intense awareness of God’s presence. For anyone who has not reached this level, such behavior would be presumptuous and irresponsible.

Fr. Zachariah speaks in the same terms as St. Seraphim:

Sometimes a man does not know himself what he will say. The Lord himself speaks through his lips. One must pray like this: “O Lord, may you live in me, may you speak through me, may you act through me.” When the Lord speaks through a man’s lips, then all the words of that man are effective and all that is spoken by him is fulfilled. The man who is speaking is himself surprised at this…Only one must not rely on wisdom

The relationship between spiritual father and child extends beyond death to the Last Judgment. Fr. Zachariah reassured his followers, “After death I shall be much more alive than I am now, so don’t grieve when I die… On the day of judgment the elder will say: Here am I and my children.” St. Seraphim asked for these remarkable words to be inscribed on his tombstone:
When I am dead, come to me at my grave, and the more often the better.
Whatever is in your soul, whatever may have happened to you, come to me
as when I was alive, and kneeling on the ground, cast all your bitterness
upon my grave. Tell me everything and I shall listen to you, and all the bitterness
will fly away from you. And as you spoke to me when I was alive , do so now.
For I am living and I shall be for ever.
By no means all Orthodox have a spiritual father of their own. What are we to do if we search for a guide and cannot find one? It is of course possible to learn from books; whether or not we have a starets, we look to the Bible for constant guidance. But the difficulty with books is to know precisely what is applicable to me personally, at this specific point on my journey. As well as books, as well as spiritual fatherhood, there is also spiritual brotherhood or sisterhood-the help given us that is , not by teachers in God, but by our fellow disciples. We are not to neglect the opportunities offered us in this form. But those who seriously commit themselves to tjie Way should in addition make every effort to find a father in the Holy Spirit. If they seek humbly they will undoubtedly be given the guidance that they require. Not that they will often find a starets such as St. Seraphim or Fr. Zachariah. We should take care lest, in our expectation of something outwardly more spectacular, we overlook the help which God is actually offering us. Someone who in others’ eyes is unremarkable will perhaps turn out to be the one spiritual father who is able to speak to me, personally, the words of fire that I above all else need to hear.