1. THE PRIESTLY-MARTYR HYPATIUS THE BISHOP OF GANGRA 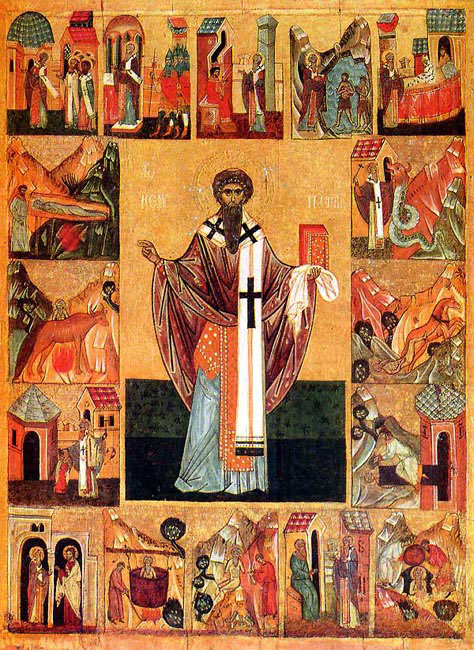 St. Hypatius with scenes from his life. Russian icon of the first half of the 15th century. Moscow, Tretyakov Gallery.

Hypatius was born in Cilicia and was the bishop of Gangra. He was present at the First Ecumenical Council [Nicaea, 325. A.D.] and was renowned throughout because of his pious and saintly life and his miracle-working. The Emperor Constantius ordered that a likeness of Hypatius be made during the saint’s lifetime. The emperor kept this likeness in his palace as a weapon against all adverse powers. Once upon returning from Constantinople, Hypatius was attacked in a narrow gorge by Novatian heretics and, along with others, was hurled to the ground in mud. At that moment a woman from that group struck him in the head with a stone and, thus, the saint died. Immediately that woman went insane and took that same stone and struck herself with it. When they took her to the grave of St. Hypatius, he interceded before God on her behalf. She was healed by the great compassionate soul of Hypatius and lived the remainder of her life in repentance and prayer. St. Hypatius died and took up habitation in the eternal Kingdom of Christ the God, in the year 326 A.D. 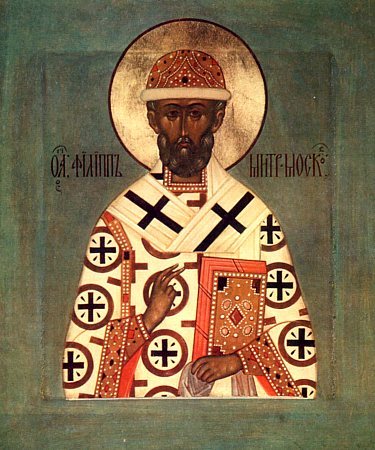 Jonah was born in the province of Kostrom. In his twelfth year he was tonsured a monk and as such lived for a long time in the Simonov Monastery in Moscow. At the time of Metropolitan Photius, Jonah became Bishop of Ryazn. When Photius died, Jonah was elected as metropolitan and sent to the patriarch in Constantinople for approval and consecration. At the same time, Isidorus, a Bulgarian by descent, outwitted Jonah and arrived before him in Constantinople and was consecrated as the Metropolitan of the Russians. Jonah returned to his cathedral in Ryazn. Isidorus, the malicious one, ended his incumbency of the Metropolitan See nefariously. Isidorus attended the Council of Florence [1439 A.D.] and then, after three years, returned to Moscow. Everyone attacked him as an apostate from Orthodoxy and banished him. It is unknown where he ended his life. Jonah, the good and wise shepherd, ascended the throne of the Metropolitan See. He was a great worker of miracles, “a discerner,” and a spiritual director. When the Agarians surrounded Moscow, Jonah repelled them through his prayers. In his later years he wished that he could be afflicted by an illness so that he could suffer pain and that, through pain, completely purify himself before his departure to the other world. According to his wishes, God permitted a sore on his foot ,which was preceded by a vision to a certain priest, James. The saint died from these wounds and took up habitation among the heavenly citizens on March 31, 1461 A.D. Many miracles have occurred over his relics. A certain mute, John by name, was brought before the relics of the saint. John kissed the hand of Jonah and, as he related later, the hand grabbed him by the tongue and he felt a sharp pain. When the hand released his tongue, John returned to those people who brought him and began to talk as though he was never a mute.

Audas was a bishop of the city of Susa. He was beheaded for Christ in the year 418 A.D. in Persia by Emperor Yezdegird. His deacon, St. Benjamin, was released by the tormentors with the understanding that he would never preach the Gospel again. In the beginning he agreed, but Benjamin could not sustain this in his heart and continued to spread the truth of Christ among the people. For this Benjamin was captured and killed three years after St. Audas in the year 421 A.D.

Apollonius was a renowned Egyptian ascetic. In his fifteenth year he renounced the world and withdrew to a mountain where he lived for forty years feeding on vegetation. After that, he established a monastery in which five-hundred monks lived. He died peacefully in the year 395 A.D. 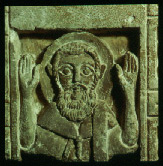 Know the truth, the Lord commands,

Who knows the truth, himself does not allow to be enslaved.

To the faithful, truth gives freedom,

And by truth, the faithful rule over the world.

Falsehood and bondage are as a source and river,

Falsehood is the midnight darkness which leads astray

And by this wayward path leads men into the abyss.

Falsehood shackles one with fear, fear from everyone,

From men and the world and demons evil.

Truth is the light which disperses darkness

And grants freedom to the despondent slave,

Freedom from fear and demons cursed.

Who recognizes truth, freedom, that one receives,

With freedom, even authority over all adversaries.

The cradle for freedom, truth prepares,

For without truth, there is not true freedom.

St. John of the Ladder says: “He who in his heart is proud of his tears and secretly condemns those who do not weep is like a man who asks the king for a weapon against his enemy and then commits suicide with it” (Step 7). If your heart is softened, be it from repentance before God or be it from knowing the boundless love of God toward you, do not become proud toward those whose hearts are still hard and calloused. Remember how long it has been since you had a hard and calloused heart. There were seven brothers who were ailing in a hospital. One of them was restored to health and rose to his feet. He hurried to serve his other brothers with fraternal love and concern so that they too would recover. You be like that brother also. Consider that all men are your brothers, sick brothers. If you feel that God has given you health before them, know that it was given to you through mercy, so that even you as a healthy person may serve others who are sick. Of what do we have to be proud? As though good health comes from ourselves alone and not from God. As though a mud hole can cleanse itself and not from a source deeper and cleaner.

To contemplate the Lord Jesus in death:

1. How His body lies peacefully in a grave;

2. How He descended in the Spirit to the souls in Hades in order to redeem the souls of the forefathers.

About joy after sorrow

The father steps up to the gallows and his sons are crying around him. Instead of the sons comforting him, he comforts his sons. Something similar to this happened to the Lord and His disciples. Walking toward His bitter death, the Lord is more saddened because of the grief of His disciples, rather than by that which He has to endure. He caresses them with consolation and encourages them with the prophecy of the new and impending vision: “But I will see you again.” This is a prophecy about the resurrection. Many times our Lord prophesied His death, but when He prophesied His death, He also prophesied His resurrection. Nothing unforeseen ever did happen to Him. He did not prophesy about Himself only, but also about them [the disciples]. They will be in great sorrow as a woman when she gives birth and endures pain. As a woman forgets her pain and rejoices when she gives birth “for a child has been born into the world” (St. John 16:22), so will it be with them. In their consciousness Christ the Lord was not completely in the form of the God-Man. As long as they had known Him as a sufferer and mortal man, they only knew Him partially; until then, the pain of birth lasts in their souls. But when they see Him again, resurrected and alive, miraculous and almighty, Lord over all things in heaven and on earth, the pain and sorrow will cease and joy will appear in their hearts. For Christ will be completely formed in their consciousness as the God-Man and then they will know Him in His fullness and in His totality. Only then will He be totally born for them.

So with us brethren, as long as we know Him only from His birth to His death on Golgotha, we know the Lord Jesus partially. We will know Him completely only when we know Him as the Resurrected One, the Victor over death.

O Lord All-victorious, have mercy on us and by Your resurrection cause us to rejoice as You comforted and made joyful Your disciples.