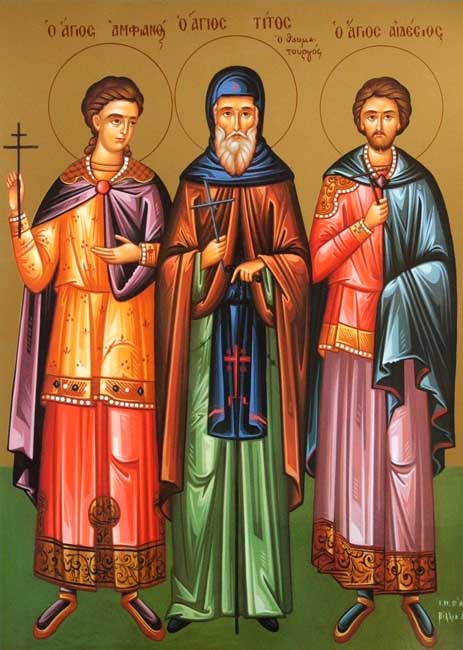 From his youth, Titus loved Christ the Lord and detested the vanities of the world. Because of this, he retreated from the world, entered a monastery and received the Great Angelic Habit [The Great Schema-The Angelic Face]. Not feeling any remorse, he dedicated himself to the somber and narrow path of monasticism. Through great patience, he attained two basic virtues: that of humility and obedience. In these virtues, he surpassed «not only the brethren, but also all men.» From his youth he preserved the purity of his soul and body. At the time of the Iconoclastic heresy… he proved himself to be an unwavering pillar of the Church of God. Because of his great humility and purity, God bestowed upon him the gift of performing miracles, both during his life-time and after his death. When he was translated to the Lord he left behind a countless number of disciples. He died peacefully in the ninth century.

2. THE HOLY MARTYRS AMPHIANUS AND EDESIUS

These two young men were blood brothers from the city of Patara of distinguished but pagan parents. While they were studying the secular sciences in the city of Beirut, they were enlightened by the Spirit of God, and acknowledging the falsehood of paganism, discerned the truth of Christianity. When they returned home they could no longer live with their pagan parents and kinsmen and secretly fled to Caesarea in Palestine to the presbyter Pamphilius, renown for his sanctity and spiritual learning. With Pamphilius, they studied the Law of God day and night and practiced Christian asceticism. It is said of Pamphilius that he was twenty years old according to the flesh but, in understanding and generosity, he was a hundred years old. When a persecution began during the reign of Maximian, many Christians fled the city and hid themselves. Others, willingly and rejoicefully, gave themselves into the hands of the persecutors in order to suffer for the Name of Him, Who first suffered for them. Amphianus was among the latter. Unafraid, he entered a pagan temple where Prince Urban was offering sacrifices to the idols, grabbed the prince by the hand which was holding the sacrifice and cried to him to refrain from serving and making sacrificial offerings to dead idols and to acknowledge the True God. Some of the pagans who heard these words and witnessing the great courage of Amphianus, repented and embraced the Faith of Christ. The enraged prince subjected Amphianus to torture. Among the other tortures, they wrapped the legs of Amphianus with cotton and set them on fire. When he remained alive, they tossed his body into the sea with a stone around his neck. The sea became turbulent and hurled his martyred body back into the city. At first, Edesius was sent to a cooper mine in Palestine and was later taken to Egypt. In Alexandria, Edesiuswas filled with holy zeal against a certain Prince Hierocles who, in the market place, assembled Christian nuns, maidens and virtuous women and handed them over to the most shameful perverts for derision. Edesius, filled with holy zeal, struck the disgraceful prince. For that, he was tortured and drowned in the sea as was his brother Amphianus. As two innocent lambs, they were sacrificed for Christ about the year 306 A.D. and were translated to the glorious mansions of the Lord.

As a sacrifice, two brothers offered themselves to God,

Amphianus and Edesius, blood brothers both,

He who has faith in God, does not value the world,

To a dead soul, the world can replace God.

Whoever has love for Christ; of death, he is not afraid,

Among the immortal and even before death, he is already numbered.

Whoever considers death as the gloomy end; the end of the inglorious,

That one must consider himself a slave of despair.

Death; the martyrs considered the veil of heaven,

An example they gave; that to fear death is not necessary.

That there is no heaven, O man, do not fear

But, fear the Dreadful Judgment which heaven prepares.

For a sinner it would be easier if heaven did not exist,

That is why the sinner with anger questions:

But heaven, where is it?

O sinner, heaven is not there, where you are,

Together, you and heaven will never be.
REFLECTION

«It is better to be a simpleton and to approach God with love than to be a know-it-all and, at the same time, be an enemy of God.» These are the words of the priest-martyr, St. Iraneaus of Lyon. The truth of these words have been confirmed at all times and is also confirmed in our time. One thing must be added to this, namely, that the lovers of God are not simpletons because they know God well enough that they are able to love Him. Of all human knowledge, this knowledge is more important and greater. To this must be added that the enemies of God cannot be more knowledgeable, even though they consider themselves as such, because their knowledge is unavoidably chaotic, for it does not have a source and does not have order. For the source and order of all knowledge is God. Some of the saints, such as Paul the Simple, did not know how to read or write yet with the strength of their spirit and divine love surpassed the entire world. Whosoever approaches God with love, that person is not capable of crime. Knowledge without love toward God is motivated by the spirit of criminality and war. St. Euthymius the Great taught: «Have love; for what salt is to food, love is to every virtue.» Every virtue is tasteless and cold if it is not seasoned and warmed by divine love.

To contemplate the Lord Jesus in Hades:

1. How His plan for salvation is all abundant, encompassing all generations and all ages from the beginning to the end;

3. How He, while His lifeless body lay in the tomb, descended into Hades with His soul and announced salvation and redemption to the fettered.

About the Living God and about His living children

Whose are we while we live? We are the Lord’s. Whose are we after we die? We are the Lord’s. Whose are the righteous? They are the Lord’s. Whose are the sinners? They are the Lord’s. The Lord embraces all, both the living and the dead, those of the past, those of the present and those of the future. No one is so all-embracing as is the Lord Jesus. Who, of those so-called philanthropists of mankind, teachers, leaders or enlighteners ever attempted to perform any good for the dead? This can be decisively answered: never and no one! This thought alone would be ridiculous even in the eyes of the world – to do something good for the dead? This is amusing to all those who think that death is mightier than God and that which death swallows up is destroyed for ever. To be concerned about the dead, to do good for the dead ceased to be amusing since the revelation of the Lord Jesus, Who revealed that He is God, the God of the living; Who revealed in His works, by descending into Hades to redeem and to save the souls of the righteous from the time of Adam to the time of His death on the cross.

All-embracing is our All-glorious Lord, Who, by His discerning thoughts, reflects about everyone and sees everyone born of women; those who are above the graves and those who are in the graves. So it is with His love, for He embraces all the souls of the righteous regardless of the time and place which conceals them. Finally, even by His labors, for He labors for all of them, to redeem all of them, to save them, and to lead them into the kingdom and to glorify them before the face of His Heavenly Father, the Life-giving Spirit and the myriads of holy angels.

To You be glory and thanks always. Amen.