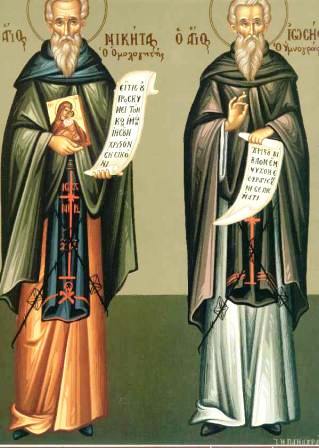 Saints Nicetas the Confessor and Joseph the Hymnographer
1. SAINT NICETAS THE CONFESSOR

Nicetas was born in Bithynia in the city of Caesarea. His father, Filaret, after the death of his spouse, was tonsured a monk while Nicetas remained with his paternal grandmother. After reaching maturity and completing all of his studies, Nicetas entered the Monastery of Medikion, where the Abbot Nicephorus tonsured him a monk. After seven years of hardship and mortification, Patriarch Tarasius ordained him a priest (Heiromonk). Following the deaths of Abbot Nicephorus and Athanasius, the faithful companion of Nicetas, the monastic brotherhood elected him as abbot, against his will. St. Nicetas was a holy example and model of life and asceticism to his brethren for many years. When Leo V, the Armenian, was crowned emperor, after the pious Irene and the right-believing Emperors Nicephorus and Michael, the Iconoclastic struggle was again enflamed. The emperor deposed Patriarch Nicephorus and later banished him into exile and, in his place, elevated the heretic Theodotus Cassiteras, a man of impure life. Nicetas was also imprisoned and tortured but he remained steadfast in his Orthodoxy. He was led from prison to prison and suffered hunger, thirst, chills, oppressive heat and ridicule. He did not permit himself to waver. What particularly annoyed him was the laughter and scorn of a certain Nicholas. One night, Nicholas’ deceased father appeared to him in a dream and rebuked Nicholas saying:»Withdraw from Nicetas, the servant of God.» From that moment on Nicholas repented and did not annoy the saint anymore and turned others away from annoying him also. When Leo V, the Armenian, met with a wicked death, the empire was taken over by the Orthodox Emperor Michael, the Stammerer, who liberated all the Orthodox sufferers. Nicetas then withdrew to an isolated place near Constantinople, where in prayer and thanksgiving to God for all, spent the remaining days of his earthly life. During his lifetime he worked many miracles through prayer. When he died his body was translated to his monastery. At the time of the funeral procession, many who were ill and who reached out and touched his body were healed. His relics were placed next to the grave of Nicephorus his spiritual father and Athanasius, his companion. This great hierarch died in the year 824 A.D.

2. SAINT PAUL, THE SORROWFUL ONE

Paul was a Russian by birth. In his youth he was enslaved by the Turks. Not wanting to deny the Faith of Christ and to embrace Islam, he was tortured and slain by the sword in Constantinople in the year 1683 A.D.

Ulphianus was a young man from the city of Tyre. He suffered for Christ at the hands of Urban, the mayor of the city of Tyre, who also was the torturer of Amphianus [April 2]. Finally, he was tied in a sack along with a dog and a snake and tossed into the sea. He suffered and was glorified in the year 306 A.D.

After him follow a company of those who have already repented,

A company of repented ones, who received the wounds

And in much sufferings they spent days,

For the sake of the Living Christ, Savior and Lord,

As did Saint Paul, the Apostle of the People.

And Nicetas the wonderful, bore the heavy cross,

Suffering and scorn for Christ, he endured.

A fragile body, but a spirit as of steel

In Nicetas the holy, martyr courageous.

The Emperor he conquered and Empires he outlived,

Therefore at him, the earth and the heavens are amazed.

Now, among the angels wedded in glory

He helps all who, for the Cross, are persecuted.

Before God, his prayer ascends,

And on earth, his help descends.

«I await a thousand deaths for myself,» wrote St. Athanasius the Great to his flock in Egypt at the time of the terrible Arian heresy. Every religious man can say this about himself who, in the spirit, has glanced and seen the net in which is contained every human soul in this world. The more spiritual a man is, the denser the net becomes. Such is the will of God: that the most spiritual are saved by the most narrow path. The Psalmist David also says: «Many are the afflictions of the righteous» (Psalm34:19). However, in the end, victory and glory belong to the righteous. They need only to arm themselves with faith and forbearance. Whoever believes also understands their suffering. He who clothes himself with patience, will see victory and glory. To him who loves the Lord, even the narrowest path is sufficiently wide enough, the greatest pain an easy yoke and the most violent death, a joyful wedding feast.

To contemplate the Lord Jesus in Hades:

1. How He descended into Hades with great power, by which Hades trembles;

2. How the evil spirits, the then lords of Hades, flee before His Face;

3. How the souls of the righteous ancestors and prophets overwhelmingly rejoice at His coming.

About the great desire of God

God wants that all men be saved, that is why He descended into Hades to save those who lived on earth before His coming. For, had He not descended into Hades, an enormous number of righteous souls would have perished forever. And yet, had He not descended into Hades, the main habitat of evil against God and the human race, Hades would have remained undestroyed. Therefore, the two reasons which motivated Christ, the Giver-of-Life, to descend into Hades in the Spirit are: First, to destroy the nest of the powers of Hades and, Second, to bring from Hades to Heaven, the souls of ancestors, prophets and righteous men and women, who have fulfilled the Old Dispensation (The Old Law of God) and, by that, pleased God. Before Satan was totally jubilant at gazing upon Christ humiliated and lifeless on the Cross, Christ appeared alive and almighty in the midst of Hades, the primary abode of Satan. What unexpected and dreadful news for Satan! For three years Satan wove snares against Christ on earth and in three days, behold, Christ destroyed Satan’s kingdom and carried away the most precious booty in the form of a swarm of righteous souls.

O Lord, You want that all men be saved. We pray to You, save even us. For there is no salvation nor Savior outside of You. In You do we hope, You alone do we worship, You, the Father and the Holy Spirit, now and always. Amen.