Agathopodus was a deacon and Theodulus was a lector in the church at Thessalonica. Agathopodus was adorned with the greying of age and Theodulus with youthful understanding and chastity. At the time of Diocletian’s pursuit of Christians these two were summoned to court. They responded with rejoicing and holding each other by the hand, they walked along crying out: “We are Christians!” All the advice of the judges that they deny Christ and worship idols, remained in vain. After an extended imprisonment and hunger they were sentenced to death by drowning in the sea. Their hands were bound behind their backs, a heavy stone was hung around their necks and they were led out to be drowned. When they first wanted to toss Agathopodus into the deep, he cried out: “Behold, by this second baptism we are washed of all our sins and in purity do we depart to Christ Jesus.” Shortly afterward, the sea tossed their drowned bodies upon the shore and Christians buried their bodies with honors. St. Theodulus appeared to his acquaintances as a bright angel in glistening attire and ordered them to distribute all of his remaining estate to the poor. These glorious and wonderful soldiers of Christ suffered honorably during the reign of Diocletian and the Thessalonican Prince Faustinus in the year 303 A.D.

2. THE VENERABLE MARK OF TRACHE

He is also called “Mark the Athenian” because Athens was the place of his birth. His parents died after he completed his higher education in Athens. He thought to himself that death, even for himself, was unavoidable and that one should sufficiently prepare beforehand for that honorable departure from this world. Distributing all of his possessions to the poor, he sat on a plank in the sea and with a tenacious faith in God’s help, prayed that God direct him wherever He wills. God, in His Providence, protected him and brought him to Lybia (or Ethiopia) to a mountain called Trache. Mark lived an ascetical life on this mountain for ninety-five years, seeing neither man nor beast. For thirty years, he waged a violent combat with evil spirits and suffered from hunger, thirst, frost and heat. He ate dirt and 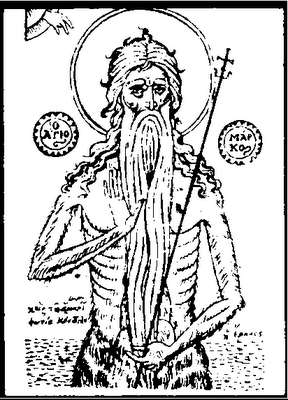 drank sea water. After thirty years of the most vehement suffering, the defeated demons fled from him and a angel of God began to bring him food daily in the form of bread, fish and fruit. St. Serapion visited him before his death and, afterward, made known the miraculous life of Mark. Mark asked St. Serapion: “Are there any Christians in the world now, who, if they were to say to this mountain, `Arise from here and hurl yourself into the sea,’ would it be so?” At that moment, the mountain upon which they stood moved in the direction of the sea. Mark raised his hand and stopped it. Such was the miracle-working power which this man of God possessed. Before his death, he prayed for the salvation of mankind and then gave up his soul to God. St. Serapion saw angels as they bore Mark’s soul and he also saw an extended hand from heaven which received it. St. Mark lived to be one-hundred thirty years old and died about the year 400 A.D.

THE PRAYER OF SAINT MARK OF TRACHE

Behold the final hour on earth for me ticks,

I go where the Lord shines in place of the sun,

From the dusty, fleshly garment, I am leaving,

And before Your face O Christ, I am departing.

Just one more wish over the earth, I am unfolding

Before Your Throne, with prayer I penetrate:

For all mankind, I desire salvation,

For everyone and for all, freedom from sin.

I desire that the virtuous ascetics be saved,

And all diligent laborers in Your field.

I desire that prisoners [for the Faith] because of You, be saved,

For the sake of Your love, who sacrifice themselves,

And for sinners cruel, that, violence commit

And those who endure violence for Your sake,

Salvation to the monasteries [Lavras] with monks plentiful,

Salvation to the faithful; the tearful and the poor,

Salvation to the churches throughout the whole universe,

The Shepherds of the Church, to all as to me,

All the servants of God and handmaidens all,

Whom the world knows or whom in loneliness hide:

Salvation to the baptized ones and the adopted ones,

With the Life-giving Spirit of God enlivened:

Salvation to the humble and the merciful,

To every heart of man, the healthy and the infirm,

And salvation to my brother Serapion.

O Powerful Lord, that is my wish

And final prayer. Let it be Your will!

“Live as though you were not of this world and you will have peace.” Thus spoke St. Anthony to his disciples. An amazing lesson but truthful. We bring about greater misfortunes and uneasiness upon ourselves when we desire to associate and identify ourselves, as much as possible, to remain in this world. Whenever a person retreats, as much as possible, from this world and as often as he contemplates this world as existing without him and the deeper he immerses himself in reflecting about his unworthiness in this world, he will stand closer to God and will have deeper spiritual peace. “Everyday I face death”, says St. Paul (1 Corinthians 15:31), that is, everyday I feel that I am not in this world. That is why he daily felt like a heavenly citizen in the spirit. When the torturer Faustinus asked St. Theodulus: “Is not life better than a violent death?” St. Theodulus replied: “Indeed, even I think that life is better than death. Because of this, I decided to abhor this mortal and temporal life, barely existing on earth, so that I may be a partaker of life eternal.”

To contemplate the Resurrection of the Lord Jesus:

1. How the earth did quake at His return to the body as it did before His separation from the body;

2. How the angels descended into the tomb to serve Him as they had always served Him when He allowed them to do so.

About the fulfillment of the prophecy

“Because You will not abandon My Soul to the nether world, nor will you suffer your faithful One to undergo corruption” (Psalm 16:10).

These are the words, the glowing prophetic words of the inspired discerner of mystery. This, David speaks about Christ the Lord, about His soul and about His body, i.e. about that which is human in Him. That these words of David pertain to the resurrected Christ was witnessed by the Apostle Peter in his first sermon immediately after the descent of the Holy Spirit: “Because you will not abandon my soul to the nether world nor will you suffer your holy one to see corruption” (Acts of the Apostles 2:27). For the apostle says, “about the patriarch David that he died and was buried and his tomb is in our midst to this day” (Acts of the Apostles 2:29). It is not possible that those words refer to David, although David speaks as though they are from him and refer to him, but rather those words refer to a descendant of David according to the flesh. The body of David is decomposed as are the bodies of his other descendants. Christ, therefore, is David’s descendant in the flesh, Who, neither remained in Hades nor did His body see corruption. “He [David] foresaw and spoke of the resurrection of the Messiah” (Acts of the Apostles 2:31). Truly, a glowing prophecy! Truly, a wondrous foresight! Before the resurrection of the Lord, these words must have sounded unintelligible and irrational for all the Jewish interpreters of the Psalms! When the seal on the tomb is removed, then the seal of the many, totally obscure and unclear prophecies, is also removed. Christ resurrects and the mysteries become known. The seal of the tomb is removed not only from His body but also from the countless words and visions of the prophets. Christ resurrects and the prophetic words are also resurrected. Descending into Hades the Lord brought the heavenly light to the souls of the righteous fathers and prophets. By His resurrection, He brought their words and visions to the light of understanding and truth. Christ resurrects and all that is good, righteous and truthful, before and after the resurrection morning, resurrected also.