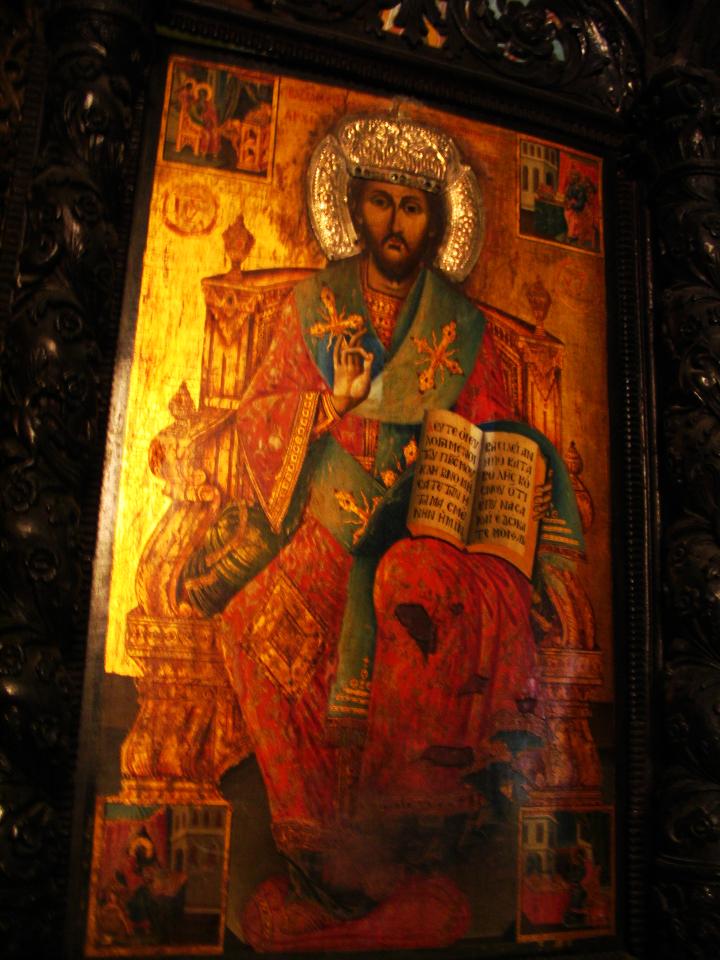 Icon of Christ "the Great High-priest", from the Orthodox Church of St. Gabriel in Nazareth

“But as our Lord is alone truly Master, so the Son of God is truly good and patient, the Word of God the Father having been made the Son of man. For He fought and conquered; for He was man contending for the fathers, and through obedience doing away with disobedience completely: for He bound the strong man (St. Matthew 12:29), and set free the weak, and endowed His own handiwork with salvation, by destroying sin. For He is a most holy and merciful Lord, and loves the human race.
Therefore, as I have already said, He caused man (human nature) to cleave to and to become, one with God. For unless man had overcome the enemy of man, the enemy would not have been legitimately vanquished. And again, unless it had been God who had freely given salvation, we could never have possessed it securely. And unless man had been joined to God, he could never have become a partaker of incorruptibility. For it was incumbent upon the Mediator between God and men, by His relationship to both, to bring both to friendship and concord, and present man to God, while He revealed God to man. For, in what way could we be partaken of the adoption of sons, unless we had received from Him through the Son that fellowship which refers to Himself, unless His Word, having been made flesh, had entered into communion with us? Wherefore also He passed through every stage of life, restoring to all communion with God. Those, therefore, who assert that He appeared putatively, and was neither born in the flesh nor truly made man, are as yet under the old condemnation, holding out patronage to sin; for, by their showing, death has not been vanquished, which “reigned from Adam to Moses, even over them that had not sinned after the similitude of Adam’s transgression.” (Romans 5:14) But the law coming, which was given by Moses, and testifying of sin that it is a sinner, did truly take away his (death’s) kingdom, showing that he was no king, but a robber; and it revealed him as a murderer. It laid, however, a weighty burden upon man, who had sin in himself, showing that he was liable to death. For as the law was spiritual, it merely made sin to stand out in relief, but did not destroy it. For sin had no dominion over the spirit, but over man. For it behoved Him who was to destroy sin, and redeem man under the power of death, that He should Himself be made that very same thing which he was, that is, man; who had been drawn by sin into bondage, but was held by death, so that sin should be destroyed by man, and man should go forth from death. For as by the disobedience of the one man who was originally moulded from virgin soil, the many were made sinners,(Romans 5:19) and forfeited life; so was it necessary that, by the obedience of one man, who was originally born from a virgin, many should be justified and receive salvation. Thus, then, was the Word of God made man, as also Moses says: “God, true are His works.” (Deuteronomy 32:4) But if, not having been made flesh, He did appear as if flesh, His work was not a true one. But what He did appear, that He also was: God recapitulated in Himself the ancient formation of man, that He might kill sin, deprive death of its power, and vivify man; and therefore His works are true.” (Against the Heresies, Book 3, chapter 18, paragraphs 6-7)

“But if a thought of this kind should then suggest itself to you, to say, What then did the Lord bring to us by His advent?-know ye that He brought all [possible] novelty, by bringing Himself who had been announced. For this very thing was proclaimed beforehand, that a novelty should come to renew and quicken mankind.” (Against the Heresies 4, 34, 1)

“For in no other way could we have learned the things of God, unless our Master, existing as the Word, had become man. For no other being had the power of revealing to us the things of the Father, except His own proper Word. For what other person “knew the mind of the Lord,” or who else “has become His counsellor?” (Romans 11:34). Again, we could have learned in no other way than by seeing our Teacher, and hearing His voice with our own ears, that, having become imitators of His works as well as doers of His words, we may have communion with Him, receiving increase from the perfect One, and from Him who is prior to all creation. We -who were but lately created by the only Best and Good Being, by Him also who has the gift of immortality, having been formed after His likeness (predestinated, according to the prescience of the Father, that we, who had as yet no existence, might come into being), and made the first-fruits of creation – have received, in the times known beforehand, [the blessings of salvation] according to the ministration of the Word, who is perfect in all things, as the mighty Word, and very man, who, redeeming us by His own blood in a manner consonant to reason, gave Himself as a redemption for those who had been led into captivity. And since the apostasy [i.e. the devil] tyrannized over us unjustly, and, though we were by nature the property of the omnipotent God, alienated us contrary to nature, rendering us its own disciples, the Word of God, powerful in all things, and not defective with regard to His own justice, did righteously turn against that apostasy, and redeem from it His own property, not by violent means, as the [apostasy] had obtained dominion over us at the beginning, when it insatiably snatched away what was not its own, but by means of persuasion, as became a God of counsel, who does not use violent means to obtain what He desires; so that neither should justice be infringed upon, nor the ancient handiwork of God go to destruction. Since the Lord thus has redeemed us through His own blood, giving His soul for our souls, and His flesh for our flesh, and has also poured out the Spirit of the Father for the union and communion of God and man, imparting indeed God to men by means of the Spirit, and, on the other hand, attaching man to God by His own incarnation, and bestowing upon us at His coming immortality durably and truly, by means of communion with God,-all the doctrines of the heretics fall to ruin.” (Against the Heresies 5,1,1)

“But now the case stands thus, that the Word has saved that which really was [created, viz.,] humanity which had perished, effecting by means of Himself that communion which should be held with it, and seeking out its salvation. But the thing which had perished possessed flesh and blood. For the Lord, taking dust from the earth, moulded man; and it was upon his behalf that all the dispensation of the Lord’s advent took place. He had Himself, therefore, flesh and blood, recapitulating in Himself not a certain other, but that original handiwork of the Father, seeking out that thing which had perished. And for this cause the apostle, in the Epistle to the Colossians, says, “And though ye were formerly alienated, and enemies to His knowledge by evil works, yet now ye have been reconciled in the body of His flesh, through His death, to present yourselves holy and chaste, and without fault in His sight.” (Colossians 1:21) He says, “Ye have been reconciled in the body of His flesh,” because the righteous flesh has reconciled that flesh which was being kept under bondage in sin, and brought it into friendship with God.” (Against the Heresies, 5, 14, 2)

“Into this paradise the Lord has introduced those who obey His call, “summing up in Himself all things which are in heaven, and which are on earth” (Ephesians 1:10); but the things in heaven are spiritual, while those on earth constitute the dispensation in human nature. These things, therefore, He recapitulated in Himself: by uniting man to the [Holy] Spirit, and causing the Spirit to dwell in man, He is Himself made the head of the Spirit, and gives the Spirit to be the head of man: for through Him (the Spirit) we see, and hear, and speak.
He has therefore, in His work of recapitulation, summed up all things, both waging war against our enemy, and crushing him who had at the beginning led us away captives in Adam, and trampled upon his head, as thou canst perceive in Genesis that God said to the serpent, “And I will put enmity between thee and the woman, and between thy seed and her seed; He shall be on the watch for thy head, and thou on the watch for His heel.” (Genesis 3:15) For from that time, He who should be born of a woman, [namely] from the Virgin, after the likeness of Adam, was preached as keeping watch for the head of the serpent. This is the seed of which the apostle says in the Epistle to the Galatians, “that the law of works was established until the seed should come to whom the promise was made.” (Galatians 3:19) This fact is exhibited in a still clearer light in the same Epistle, where he thus speaks: “But when the fulness of time was come, God sent forth His Son, made of a woman.”(Galatians 4:4) For indeed the enemy would not have been fairly vanquished, unless it had been a man [born] of a woman who conquered him. For it was by means of a woman that he got the advantage over man at first, setting himself up as man’s opponent. And therefore does the Lord profess Himself to be the Son of man, comprising in Himself that original man out of whom the woman was fashioned, in order that, as our species went down to death through a vanquished man, so we may ascend to life again through a victorious one; and as through a man death received the palm [of victory] against us, so again by a man we may receive the palm against death.” (Against the Heresies 5,20,2 – 5,21,1)