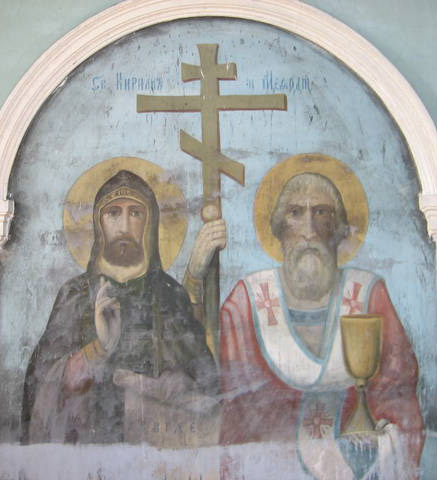 Born in Thessalonica, Saint Methodius was a military man before becoming a monk on Mount Olympus. His brother Constantine, known as the Philosopher because of his erudition, was Librarian at the Church of the Holy Wisdom in Constantinople; he later became a monk with the name of Cyril. The Emperor Michael sent him with his brother Methodius to the Khazars in response to their petition for teachers to expound to them the Christian Faith. On their way, they stayed in Cherson, where they recovered from the Black Sea the relics of Saint Clement of Rome. Later, they were called by Prince Rostislav of Moravia to instruct his people in the Orthodox Faith (Saint Rostislav died a martyr’s death and is celebrated Oct. 15). The Saints devised an alphabet for the Slavs, and used it to translate the Greek books into the language of the people. In their apostolic labours throughout the Balkans, the holy brothers were slandered by certain Germanic bishops who opposed the use of the vernacular in the church services. Summoned to court at Rome in 867, they presented their Slavonic translations to Pope Adrian II, who received them with love and full approval. Two years later, Saint Cyril reposed in Rome on February 14 and was buried in the Church of Saint Clement. Saint Methodius was made Bishop of Moravia, but at the intrigues of certain Latin clergy, was cast into prison by the «Holy Roman Emperor» (the Germanic Emperor of the West), where he was cruelly tormented for some three years. In 874, through the defence of Pope John VIII, he was freed and made Archbishop of Moravia. Because he reproved the lax morals of the German priests in Moravia, he was soon accused of heresy by them, and was forbidden to celebrate the Liturgy in Slavonic. Summoned to Rome again in 879, he was completely exonerated and allowed once again to use the Slavonic tongue for the divine services. He reposed on April 6, 885.