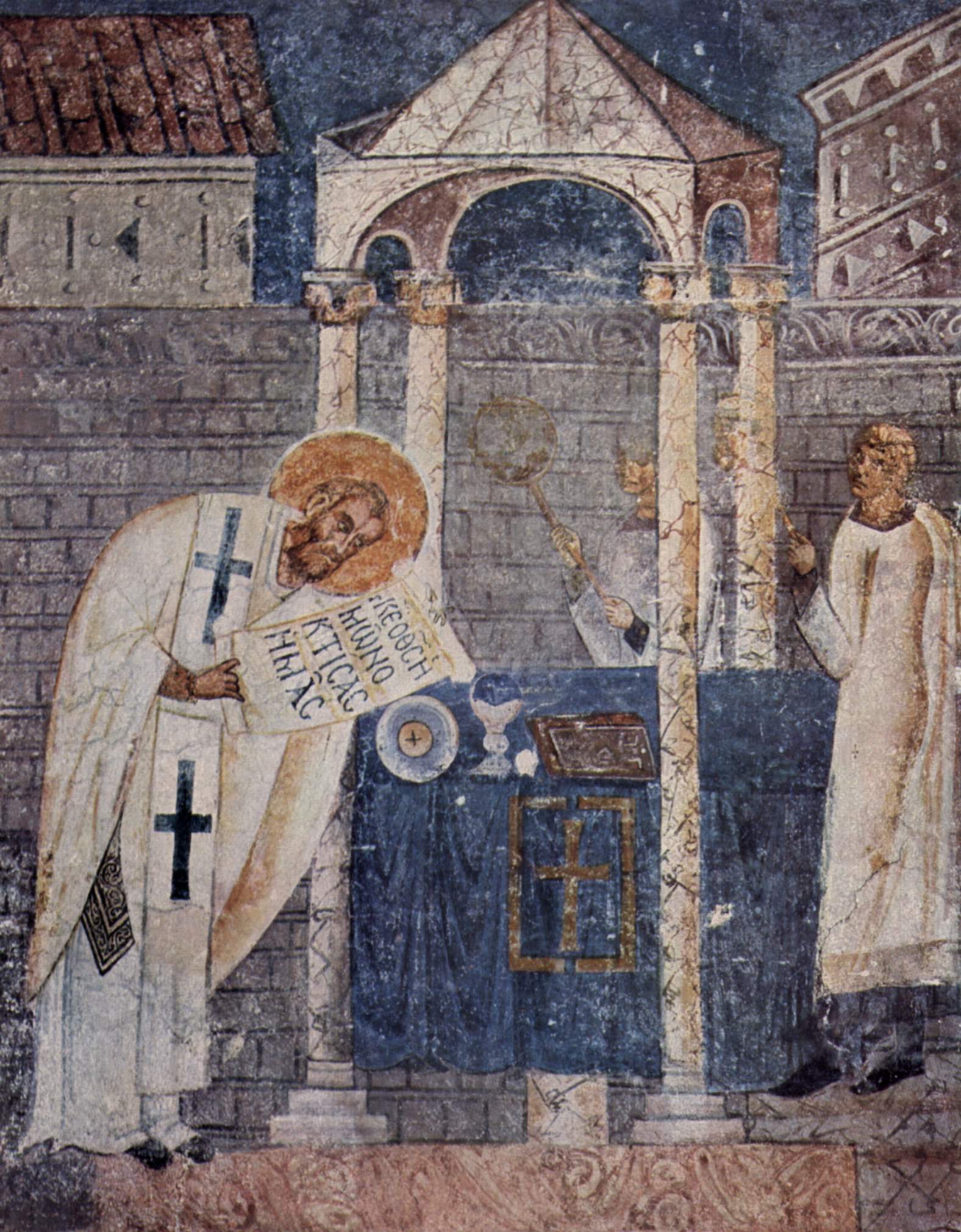 St Basil before the holy altar, celebrating the Divine Liturgy. Byzantine fresco of the 11th century in the church of St Sophia in Ohrid, in modern-day FYROM.

“For I received from the Lord that which I also delivered to you: that the Lord Jesus on the same night in which He was betrayed took bread; and when He had given thanks [Gr. euchariste’sas], He broke it and said, ‘Take, eat; this is my body which is broken for you; do this in remembrance of me.’ In the same manner He also took the cup after supper, saying, ‘This cup is the new covenant in my blood. This do, as often as you drink it, in remembrance of me'” (1 Cor. 11:23-25).

With these words – quoting the same words of Christ in Luke 22:19, 20 – St. Paul instructs the Corinthians concerning the Eucharist, the giving of thanks. Some two thousand years after Jesus gave Himself “for the life of the world” (John 6:51), there are in Christendom at least three different interpretations of His words.

How do we view the Eucharist?

For the first thousand years of Christian history, when the Church was visibly one and undivided, the holy gifts of the Body and Blood of Christ were received as just that: His Body and Blood. The Church confessed this was a mystery: The bread is truly His Body, and that which is in the cup is truly His Blood, but one cannot say how they become so.

The eleventh and twelfth centuries brought on the scholastic era, the  Age of “Reason” in the West. The Roman Church, which had become separated from the Orthodox Church in A.D. 1054, was pressed by the rationalists to define how the transformation takes place. They answered with the word transubstantiation, meaning a change of substance. The elements are no longer bread and wine; they are physically changed into flesh and blood. The sacrament, which only faith can comprehend, was subjected to a philosophical definition. This second view of the Eucharist was unknown to the ancient Church.

Not surprisingly, one of the points of disagreement between Rome and the sixteenth-century reformers was the issue of transubstantiation. Unable to accept this explanation of the sacrament, the radical reformers, who were rationalists themselves, took up the opposite point of view: the gifts are nothing but bread and wine, period. They only represent Christ’s Body and Blood; they have no spiritual reality. This third, symbol-only view helps explain the infrequency with which some Protestants partake of the Eucharist.

The Scriptures and the Eucharist

What do the Scriptures teach concerning the Eucharist?

Jesus said, ‘This is my body … this is my blood” (Luke 22:19, 20). There is never a statement that these gifts merely symbolise His Body and Blood. Critics have charged that Jesus also said of Himself, “I am the door” (John 10:7), and He certainly is not a seven-foot wooden plank. The flaw in that argument is obvious: at no time has the Church ever believed He was a literal door. But she has always believed the consecrated gifts of bread and wine are truly His Body and Blood.

In the New Testament, those who received Christ’s Body and Blood unworthily are said to bring condemnation upon themselves. “For this reason many are weak and sick among you, and many sleep” (literally, “are dead”; 1 Cor. 11:30). A mere symbol, a quarterly reminder, could hardly have the power to cause sickness and death!

Historically, from the New Testament days on, the central act of worship, the new apex of spiritual sacrifice, took place “on the first day of the week, when the disciples came together to break the bread” (Acts 20:7). The Eucharist has always been that supreme act of thanksgiving and praise to God in His Church.