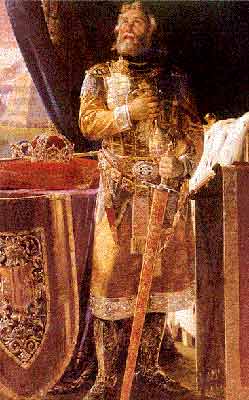 Lazar was one of the Serbian noblemen who ruled the Serbian empire after the death of Tsar Dushan. After the death of Tsar Urosh, Patriarch Ephrem crowned Lazar as the Serbian king. Lazar sent a delegation to Constantinople with the monk Isaiah to implore the patriarch to lift [remove] the anathema from the Serbian people. He fought against the Turkish powers on several occasions. Finally, he clashed [fought] on the Field of Blackbirds [Kosovo Polje] on June 15, 1389 A.D. against the Turkish Emperor Amurat where he was beheaded. His body was translated and interred in Ravanica, his memorial church [Zaduzbina] near Cuprija and later was translated to Ravanica in Srem and from there, during the Second World War (1942) was translated to Belgrade and placed in the Cathedral Church of the Holy Archangel Michael where it rests today incorrupt and extends comfort and healing to all those who turn to him with prayer. [In 1989, on the occasion of the six-hundred year anniversary of his martyrdom, St. Lazar’s relics were again translated to the monastery of Ravanica in Cuprija]. St. Lazar restored the monasteries of Hilendar [Mt. Athos] and Gornjak. He built Ravanica and Lazarica [in Krusevac] and was a benefactor of the Russian monastery St. Pantaleon [Mt. Athos] as well as many other churches and monasteries.