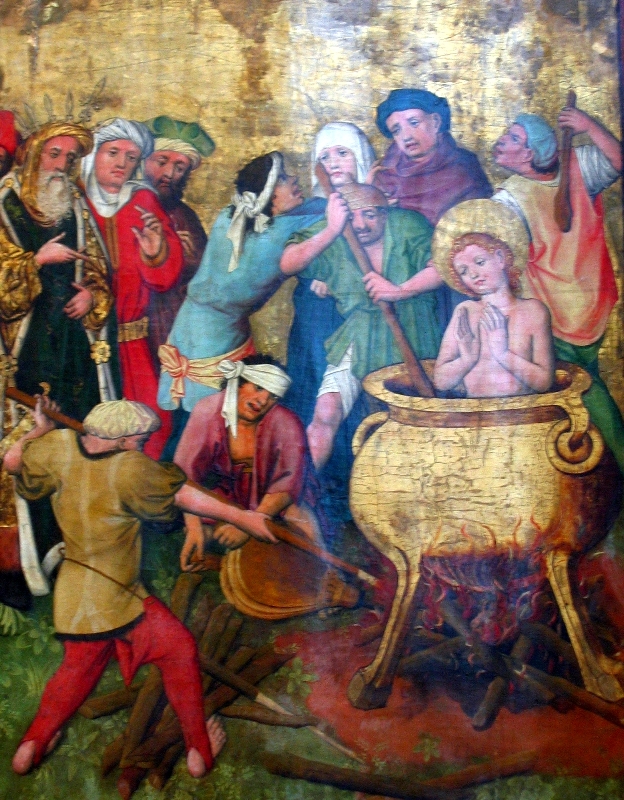 St. Vitus was born in Sicily of famous but non-believing parents. Modest was his teacher and Crescentia was his governess.

St. Vitus was baptized at an early age and, at the age of twelve, withdrew to live a life of great mortification. Angels appeared to him, directed and strengthened him in his mortification and he, himself, was as radiant and beautiful as an angel of God. The hand of a judge who beat him withered but Vitus healed his hand through prayer. Seeing twelve radiant angels in his room «whose eyes were as stars and whose faces were as lightning,» his father was blinded. Vitus, through prayer, restored his sight. When his father wanted to kill him, an angel appeared to Vitus and took him together with Modest and Crescentia to Lucania on the shore of the river Silaris. Here, Vitus worked many miracles over the infirm and the insane. At the request of Emperor Diocletian, Vitus traveled to Rome where he expelled an evil demon from the emperor’s son for which the emperor did not reward him but, on the contrary, cruelly tortured him because he would not worship the dumb idols.

However, the Lord delivered him from all torments and by His invisible hand translated him again to Lucania where he, Modest and Crescentia presented themselves to the Lord.

The relics of St. Vitus are located in Prague, the Czech Republic.