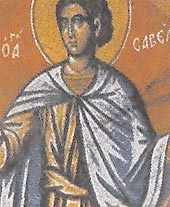 Manuel, Sabel and Ishmael were brothers born in Persia of a pagan father and a Christian mother. They were educated in the spirit of Christianity and were baptized. As Christians they were high-ranking officials at the court of King Alamundar. They were sent to Emperor Julian the Apostate to conduct negotiations and to confirm peace between the Persian and Graeco-Roman empires. The apostate emperor arranged some sort of blasphemous celebration in honor of the idols in Chalcedon. At this celebration, the emperor, with his noblemen, offered sacrifices to the idols. The Persian emissaries absented themselves from this celebration. The emperor summoned them and ordered that they also take part in the celebration and to offer sacrifices to the gods. They declared that they were foreign citizens and that they came as emissaries of the Persian king for the sake of establishing peace between the two empires and not for anything else; that they are Christians and that they consider it unworthy to worship dead idols and to offer them sacrifices. The emperor became enraged and cast them into prison. The next day, he brought them out and again began to dispute with them about faith, but the holy brothers were adamant and unwavering. They were then bound naked to trees, beaten and scraped with an iron brush. During the entire time of torturing they prayed to God with thanksgiving for their tortures: “O sweet Jesus these torments are sweet for the sake of Your love!” An angel of God appeared to them, comforted them and removed every pain from them. Contrary to all international relations, the wicked Emperor Julian finally pronounced judgment that the three brothers be beheaded. When they were beheaded, there was a great earthquake; the earth split and received the bodies of the holy martyrs so that the pagans could not burn their bodies as ordered by the emperor. After that the earth gave up the bodies of these martyrs so that Christians could find them and honorably bury them. Many miracles occurred over their relics which, when many pagans saw, they converted to the Christian Faith. When the Persian king, upon hearing how Julian inhumanely gave his emissaries over to death, he prepared an army against him. Convinced of victory, Julian set out against the Persian Empire but he was overwhelmingly defeated and perished in shame to the joy and ridicule of the entire world. 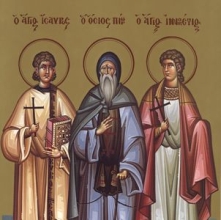 Pior was a hermit [Silentary] in Nitria. Inflamed with love for God, Pior, at an early age, renounced the world and withdrew to the Egyptian wilderness where he heroically lived a life of asceticism. It is said that he never sat at the table to eat but that he always ate standing and working. When he was asked why he does this, St. Pior replied: “I do not want to be occupied with eating as an occupation but rather as something marginal.” When they called him in council to judge a brother who had committed a sin, Pior arrived carrying a sack of sand on his back and on his chest a small bag of sand. Asked what does that mean, the saint replied: “The sack of sand on my back are my sins which I do not see and the bag of sand on my chest are the sins of my brother which I have to judge.” All the brethren were then ashamed and cried out: “This is the path of salvation!” Pior lived to be a hundred years old and reposed in the Lord in the fourth century.