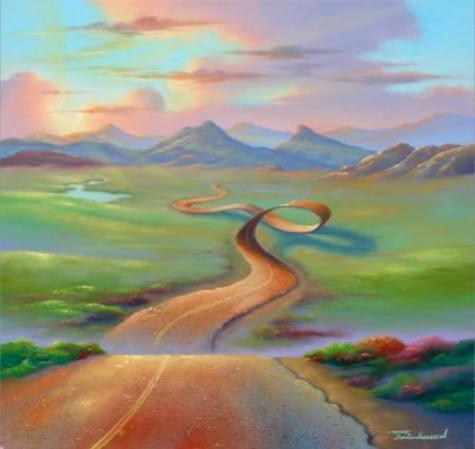 On my own accord as a little boy I used to walk about a mile to the Baptist church that some of my extended family was a part of. My aunt taught Sunday school there. These were during the good days when a little kid could walk to church on Sundays in a good little southern country town where nothing ever went wrong. Oddly enough, every Sunday, I’d walk past a church with a big golden dome on it, but I didn’t know anyone there and I was too intimidated to walk in. It was called St. Mary’s.

All throughout my early youth I continued on with the Baptists, doing the little Christmas plays and learning about the usual Sunday school material.

Eventually we moved from that town and I started going to church with a different side of the family at a local Pentecostal assembly, still just up the street from where I live now. It wasn’t really a church thing for me at that time, even as a little boy, even though I loved the activities and things with my family and friends then, I knew something was missing and frankly… shallow. I was done coloring pictures of Jonah and the whale and leaving the room when it was time for the grown people to hear their message… I never understood why the children were encouraged(sometimes forced) to leave the main area of the church when the real preaching was getting started. That’s what I wanted to hear. I was thirsting for something substantial that I could never find, and it wasn’t being filled by the redundant praise music and childish activities we were being spoon-fed.So I fell away from church altogether not too long after all that, for a good four or five years I’d say. I started getting into evil music and dark lifestyles, my mouth became filthy, my habits became filthy, my friends and associations were filthy… I was in rebellion, there was no way I was going to be a part of this modern church, where the altar was a stage and homilies were self-help seminars from overpaid ‘pastors’, self-appointed Apostles spewing garbage about how soon Jesus is coming to take us away from our problems, preaching endlessly about how unless we drive a Bentley, live in a big house and have no health problems we are not favored by God and we are missing out on His blessings.

I dabbled in demonology, paganism, buddhism, zazen meditation sessions, drugs, and music to touch the spiritual world. And I did indeed touch the spiritual world. And it left me a very dark, bitter, depressed, and angry young man… a slave to the passions, to myself, and to the demons. I thought of myself as ‘more aware than the rest’, my eyes were open, I was out of tune to the ‘lies of man-made religion.’

A few years passed this way. Nearing the end of this dark journey I was using the ouija, invoking the goddesses, studying the demons, and more things that don’t need mentioning. I was, at this point, completely lost… and I knew I was… but I was too numb to despair. I became a shell, hollow inside.

The only thing that changed me was Providence. God, in His infinite mercy, did not desire the damnation I was steadily bringing upon myself.

One night, I was laying on a friends bed, extremely drunk and high to the point of being sick. I was tossing and turning, the room was spinning, I was burning up, and all of my friends at the time were passed out around me. The thought hit me, then, feeling this way, and seeing them all passed out from intoxication… I’m not truly living. I am not alive. My lifestyle is living me. I’ve sold myself out.

I recall thinking of that little boy who I used to be, oh, if he could only see me right now… he would surely walk up to me and spit directly in my face and curse everything that I let him become. He was such a good kid… without a care or worry in the world. And now here is the result, sick yet again from indulgence, surrounded by a bunch of fools who don’t know whether they’re living or dead.

What was different, then… what has changed…

God had abandoned me…

… I had abandoned God.

I decided that, for better or worse, the next time the doors are open, I will go to the place where I left off. And so I did. I walked into that church, the only thing I really knew about Christianity, where I really got my first start. The pastor was preaching words that I can hardly recall… but Providence had in store that this was the day I was supposed to be in that place, at that time. What was spoken there seemed as though it was spoken directly through my bone and marrow, piercing down into my very soul… come to the altar and come back to God, it was said, come and be saved from what you have become…

I seemingly floated towards that altar, tears rolling down my face, heart pounding, not sure of what to do, say, or think. All I knew was, without the shadow of a single doubt, God truly existed, God truly was there, God is truly near the broken and contrite heart and was waiting exactly where I left Him behind. Some may call the experience I had there which truly cannot be justified in words nor explained to do it justice ‘being saved’, I call it step one of a long journey back home… one that I am still on. The prodigal had returned home, the sinner had repented, and the angels of heaven rejoiced.

I no longer had the desire for drugs or alcohol, there were no withdrawal symptoms. Any sort of item attributed to darkness or the occult was disposed of, and I dove into my Bible daily. I would pray to God, Lord, show me the way, guide me and I will follow, show me the ancient paths I’m reading of, where I may find true rest for my soul…

I knew without a doubt that God existed, from that glorious moment where I truly had experienced Him, felt Him, heard Him… but I knew that this couldn’t be it. Where is the Church?

I found a church not far away, ‘established in 33 A.D Jerusalem, the Church of Christ’ of the acapella variety which some of you are aware of… I was nearly convinced. Nearly. They talked a really good game, to put it lightly, and they could quote book chapter and verse, but something was still missing. I started studying Catholicism, thinking it was the oldest Christian expression of belief… and in a nutshell, I was pointed towards Orthodoxy.

There was a poster during my inquiry phase on The Ancient Way known as ‘eoe’, who sent me a PM with my current Priests phone number, the church number, the address, the jurisdiction, and everything… he implored me to go, quickly, not to wait, and when I got there to just observe and not try to follow along in some service book. And so I did… October the 1st, 2 years ago, the feast of the Protection of the Mother of God.

St Mary’s Orthodox Church. It had relocated over the years.

I was stunned. I felt just as much wonder as I did as a little boy, walking past that church with the huge golden dome standing sentinel against the horizon. Only now I was going inside.

and before a word was spoken, before hardly a thought could pass, I knew it. This was home.