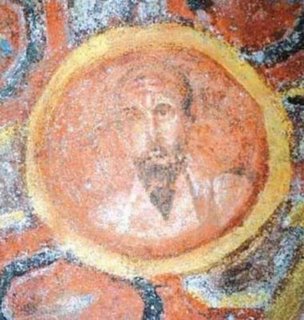 The 4th-century portrait was found in the catacombs of St Thecla, not far from the Basilica of St Paul's Outside the Walls

Vatican archaeologists have uncovered what they say is the oldest known portrait of St Paul. The portrait, which was found two weeks ago but has been made public only after restoration, shows St Paul with a high domed forehead, deep-set eyes and a long pointed beard, confirming the image familiar from later depictions.

L’Osservatore Romano, the Vatican newspaper, which devoted two pages to the discovery, said that the oval portrait, dated to the 4th century, had been found in the catacombs of St Thecla, not far from the Basilica of St Paul’s Outside the Walls, where the apostle is buried. The find was “an extraordinary event”, said Monsignor Gianfranco Ravasi, head of the Pontifical Council for Culture.

Barbara Mazzei, a restorer, said that centuries of grime had been removed with a laser. Fabrizio Bisconti, Professor of Christian Iconography at Rome University and a member of the team that made the discovery, said that it appeared to have decorated the tomb of a nobleman or high church official.

Professor Bisconti said that the catacombs contained hundreds of Christians who had wanted to be buried near St Thecla, a Roman Christian martyr — not to be confused with the friend of St Paul known from the apocryphal “Acts of Paul and Thecla” or the English 8th-century Benedictine nun of the same name. Pope Benedict XVI, who a year ago announced a “Pauline Year” dedicated to the apostle that ended yesterday, said that it had been “a true period of grace in which, through pilgrimages, catecheses, publications and various initiatives, the figure of St Paul was offered again to the entire Church. His vibrant message among Christian communities has revived everywhere the passion for Christ and the Gospel.”