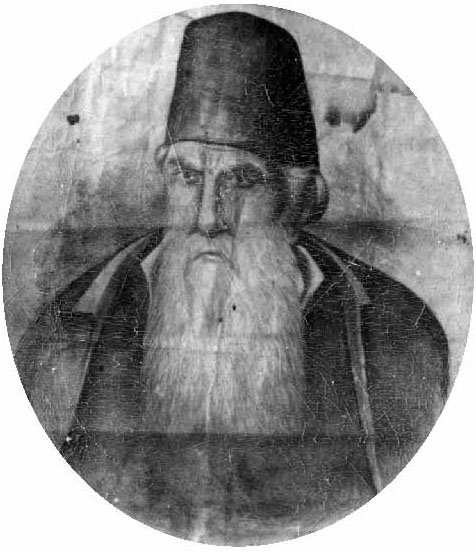 Being clairvoyant, the Elder knew what happened, and when the boy returned, Papoulakis repeated exactly the same words Abbot Agapios had used to “press” him: “Eat Dimitris. All day long grinding grain; in the evening we eat the bread.’ ” The boy shook with fear, because Papoulakis always admonished him to fast on Wednesdays and Fridays. In addition, as Dimitris was leaving after having delivered the letter, Dimitrios Paxinos, a resident of Lefki, gave him twelve pears for the Elder and four for himself. The boy was holding the pears in a kerchief, and before he said anything, Papoulakis opened the cloth, took twelve pears on his own, and left the four for the boy. He did this without saying a word, simultaneously correcting him for his violation of the fast.

Mr. D. Zaverdinos from Stavros related that his fellow villager, captain Lambros Raftopoulos, once went with his ship (a small sailing vessel) to Venice in order to bring back lumber for the church of Saint Barbara that was being built, but it seemed as though the ship would not return. As three months had passed, everyone was upset, believing that there had been a mishap at sea. They turned to Papoulakis to tell them what to do. Having prayed, he told them not to worry because the ship would arrive in six days together with the lumber. Indeed, on the sixth day the ship arrived with the lumber at Mavrona on Ithaki, just as the Elder had foretold.

Dimitrios Paizis (Korkos) from Rachi in Kionio related that when Papoulakis was staying there, his father, Apostolos Korkos, while hauling corn flour, passed by the Elder. The Elder told Mr. Apostolos, “Tell mistress Apostolena [meaning his wife] to bake us a rokissa [a small corn-flour pita].” When he told his wife the blessed one’s instruction, she replied, “Right. Do you think I’m going to sit here dilly-dallying to bake a rokissa for Dalianos [perhaps a novice of the Elder] to eat?” and she continued with her work. A bit later, however — O wonder! — both her clothing and the flax she was working with caught fire, and she herself was in danger of being burnt.

She then understood her mistake, repented, and baked the rokissa for the Elder. He repeated to her the exact same words she had spoken: “What, madam, have you brought; the rokissa for Dalianos to eat?” Moved with contrition, she asked forgiveness for her behavior, and Papoulakis forgave her.

Mr D. Zaverdinos from Stavros recounted the following incident regarding Nikos Moraitis (Tsakos) from Anogi. When he had shorn his sheep, he told his wife to give him a pokario (an amount shorn from one sheep) of wool to take to Papoulakis so that he could make clothing. His wife reacted negatively to this, using their poverty as an excuse, and adding, moreover, that if he should do this, it would become cause for their separation. The husband, however, gathered it secretly in his rucksack, and set off to water his sheep at the spring of Asprosykia, where he was to have met Papoulakis in order to give it to him. Indeed, there on the hill of Hermes on the outskirts of Stavros, he met the Elder instructing his flock under an almond tree. He approached the Elder, and made a bow to the ground. The Elder anticipated him and said, “Nikoli, take what is in your satchel and return it; I won’t keep it.” The shepherd insisted, but the Elder would not accept the gift. When the shepherd had left, Papoulakis told those present, who were of course curious, “I don’t want to be the cause of a couple’s separation.”

Katerina H. Paizi (Lianou) from Vathy related that in Perahori, the Kachrilas family had secretly made a votive promise to donate twelve talers to the church of Saint Barbara. On the day that they had decided to take the votive offering to the church, the husband said to his wife, “You know, I’m only going to give six of the talers, because the monks just fritter it away anyway.” Thus they set off for a certain house where the Elder was staying in order to give that which they had decided upon. Having greeted the Elder and kissed his hand, they placed the six talers that they had agreed on between themselves on the table. The Elder then calmly said to them, “It is superfluous, my children, since the monks just fritter it away anyway.” When the husband heard Papoulakis use exactly the same words he himself had used during the private discussion with his wife, he was distressed and repented. He confessed his error before everyone and presented the remaining six talers, fulfilling the original promise.

L. Patrikios from Vathy recounted the following. Once while Papoulakis was traveling about, he met in Agros a certain wealthy man from Kefallinia (Cephalonia) who was resting in the shade of a tree. The Elder sat down beside him and, after exchanging greetings, told the Kefallinian that they were building a church and did not have enough money — something that distressed him a lot. His companion then said, “Your work is pleasing to God; if I myself had money to give, I would.” The Saint replied, “You could help out, because you went to buy a horse, and you have money left over.” In fact, this prominent man had agreed to buy Noutsatos’s horse for forty-five exentaria,FN whereas he had been holding forty-six; thus he had money remaining. When the man heard this, he was moved to compunction and marveled at the clairvoyance of the Saint, to whom he readily gave the remaining exentari.

Leonidas Ventouras from Kionio related that D. Miliaresis had agreed with Elder Papoulakis to take him to Preveza for a fare of ten kolonata on his small ship, with a crew consisting of his father and Leonidas Ventouras himself. They set off from Kionio, passed the little island of Thileia, and came to Avlaki, between Levkas and Aitolo-karnania. Because the weather was not so favorable, they moored at Sete on the tip of Avlakas, opposite the fortress of Levkas. The ship’s owner and crew were frequently going out and procuring needed supplies using the Elder’s fare. He himself, however, did not go out at all and remained absorbed in prayer.

When the storm abated, the Saint ordered the ship to set sail, and the elderly father of the ship’s owner went out to untie the boat. But because it was taking him a long time, the Captain yelled at him angrily, “Get on board, you devil, and I’ll go out and untie it.” The old man got back on, the Captain went out and untied the ship, and they set off. They were then between Preveza and Levkas, and the weather seemed very favorable. Despite this, however, Papoulakis called out for them to go back quickly, and the ship turned around. The Saint then told them to moor at the same site where they had docked previously, because the following day they would be able to depart. He himself went down into the ship to pray. Shortly thereafter a squall rose up with terrible whirlwinds, which threatened to swamp the ship. Seeing all of this, and especially the Elder’s supernatural foresight, the shipowner was shaken and exclaimed, “We would’ve really been in trouble if we continued the journey!” “Yes,” the Elder replied, “yesterday you invited the devil to come along and he did just that. Now he’s leaving after causing that disturbance. Next time, be careful about bring your ship into such a temptation by what you say.” Moved to contrition, the shipowner took Papoulakis’ hand and devoutly kissed it, as did the others. The following morning the Captain ordered that they set sail. The Elder himself sat at the rudder and told the others to row, because danger was once again threatening, and that they needed to arrive quickly, before the bad weather caught them. In fact, as soon as they docked at Preveza, such a great storm broke out that, in order to dis-embark, they needed help from dry land, where many people were waiting for Papoulakis with devotion.

Dimitrios Zaverdinos from Stavros related that his fellow villager, Efstathios Sykiotis, had once fallen from an olive tree and suffered a severe concussion. He became paralyzed in his lower extremities and unable to help himself for three full years. When Papoulakis saw him, he felt compassion for him and said to his father, “Vasilis, if you want your son to get well, buy a sixty-drachma silver oil lamp for Saint Barbara. Let the injured boy himself take it there and I will pray for him, and he will become well.” The following day, when the distressed father bought the lamp, the sick boy started to get well and began moving his hands and feet. When he took the lamp in his hands, he was able to stand on his feet. He walked to the church of Saint Barbara and handed over the lamp in front of her icon. From then on, he remained completely well and began to work normally. He got married and had children, through the prayers of Papoulakis.