THE HOLY MARTYR EMILIAN AND THE VENERABLE PAMBO (JULY 18)

THE HOLY MARTYR EMILIAN AND THE VENERABLE PAMBO (JULY 18) 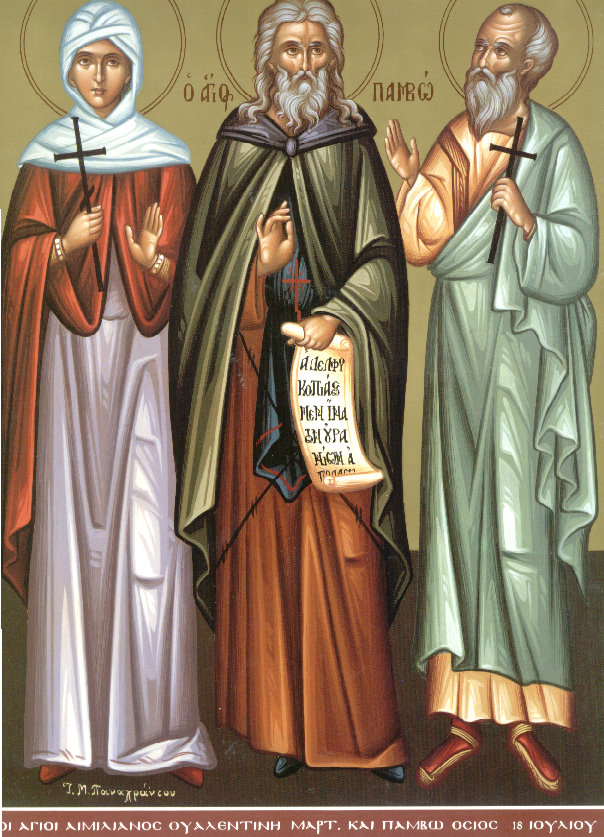 During the reign of Julian the Apostate, in the Thracian town of Dorostolon, lived a young man, Emilian, a servant of the mayor of the town. When the apostate emperor began to destroy Christianity throughout the realm of the Roman Empire by fire and sword and, when the emperor’s representative came to Dorostolon to kill the Christians, he did not find a single one. Rejoicing at this, he sponsored a great banquet for the citizens of Dorostolon and ordered sacrifices to be offered to the idols and rejoicing ensued throughout the entire town, day and night. That night, St. Emilian entered the pagan temples, markets and the streets of the town and smashed all of the idols with a sledgehammer. The next day there was terror in the city. Everyone sought the destroyer of their gods. A peasant was passing by the temple that morning and was seized. Emilian, seeing that an innocent man would suffer, said to himself: “If I conceal my works, what benefit would I receive from that which I did? Before God, will I not be found as the murderer of this innocent man?” Therefore, he appeared before the emperor’s legate and admitted all. The enraged legate asked Emilian, who had prompted you to do this? The martyr of Christ replied: “God and my soul ordered me to destroy those lifeless pillars which you call gods.” The judge then ordered that Emilian be flogged and, after flogging and other tortures, ordered him to be buried alive. Thus ended the earthly life of St. Emilian and he was received into the heavenly life on July 18, 362 A.D.

Pambo was an Egyptian and an ascetic on Mount Nitria. He was a contemporary of St. Anthony the Great, and himself was great in monastic asceticism. He was known particularly for two characteristics: through extensive training, he sealed his lips so that he did not speak one unnecessary word and that he never ate anyone’s bread except that bread which he earned with his own hands by weaving reeds. He was similar to an angel of God and, in later years his face shown like the face of Moses once did, so much so that the monks were unable to look him in the face. He did not render an immediate answer even to a simple question before praying and contemplating about it in his heart. The Patriarch Theophilus of Alexandria once visited the monks in Nitria. The monks begged Pambo saying: “Tell the pope a constructive word, which would be beneficial to him.” The quiet Pambo replied: “If he does not benefit by my silence he will not even benefit by my word.” At one time, St. Pambo with his monks traveled throughout Egypt. When they came upon a group of men who remained seated as the monks passed by, St. Pambo addressed them and said: “Arise and greet the monks so that you may receive a blessing from them for they continually converse with God and their lips are holy.” This glorious saint was able to discern clearly the fate of both the living and the dead. He rested in the Lord in the year 386 A.D.

From “The Prologue from Ohrid”, by Saint Nikolai Velimirovich