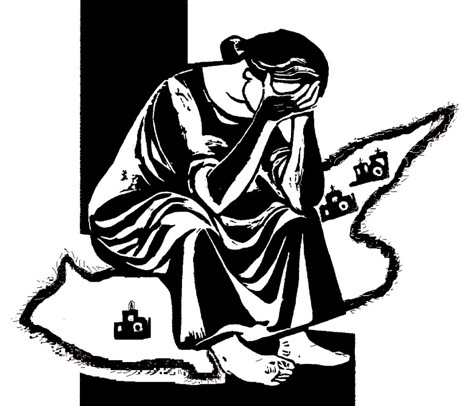 The following is a report on yesterday ‘ s 18 hour vigil and demonstration in Washington, DC to mourn the Missing Cypriots and mark the 35th anniversary of the Turkish-military invasion and continuing occupation of Cyprus. The report speaks volumes for how much the Turks fear the simple message of freedom for Cyprus and the potential strength of our victimized people. This is the third year in a row that we have come to DC armed only with cardboard signs, a few Hellenic National flags and a passionate fervor to commemorate the injustice befallen the People of the Republic of Cyprus. It drove the entire Turkish lobby (the apparatus of the Turkish State’s barbarism) into a frenzy of reactionary activity and fury..

Community activists are drawn to work for a cause for a host of reasons. On Sunday, July 19, 2009, at 7 pm a core group of CANA activists gathered outside the Turkish ambassador’s residence in Sheridan Park, Washington DC. We all traveled long journeys’ to this destination. Ioannis remembered the suffering of an eighteen year old cousin who endured an agonizing death as a result of Turkey’s napalm bombing of Massoura village in 1974. Georgia was there for a grandmother, Gregoria Georgiou, killed execution style by the invading Turkish military on August 31, 1974 in Aheritou, Cyprus. Theo looked to the vigil and demonstration to gain insight as to whether his faith could truly allow him to ‘forgive but never forget’ Turkish aggression and lead him closer to a decision on whether to join the priesthood of the Greek Orthodox Church. Foti came because he is drawn to the Hellenic culture and the bloody history of Turkish barbarism to the Armenian, Assyrian, Greek and Chinese communities. This group was aided intermittently by local DC activists but they largely stood alone against the Turkish embassy and diplomatic community for the entire vigil and demonstration.

The CANA activists set up a candle lit memorial to the victims of the illegal Turkish invasion and occupation of Cyprus. Candles were lit to memorialize the missing and the murdered Cypriots, for time lost to the political ineptitude and personal agendas of the Greek and Cypriot establishment and lobby groups, for unfulfilled dreams and stolen land torn from the grasp of Greek Cypriots by the British and American geopolitical elite.

CANA activists used a banner, placards, the Cypriot, Greek and Byzantine flags to greet DC commuters driving past the Turkish ambassador’s residence on Monday morning.. They wanted it known that July 20, 2009, marked the 35th anniversary of the illegal Turkish invasion and occupation of Cyprus.. The only acceptable goal was for ‘Turkey to Get Out of Cyprus.’

CANA activists then moved on to the Turkish embassy where they were greeted by a counter demonstration led by Gunay Evinch, the lead counsel of the Turkish Embassy. Our four stood against their thirty. Some ninety minutes into the demonstration the Secret Service were called in by the Turkish lobby to protect them against the four – a sixty-two year old man, a future seminary student, a Chinese man and a woman. The event concluded when the CANA activists disbanded at noon.

To read a Southern Italian perspective on the 18-hour vigil and demonstration by CANA, please visit this link to the Magna GRECE Online Journal titled, Remember Cyprus! :

Also you can open www.freedom4cyprus.blogspot.com (newly created) and watch the demonstration yesterday in Nicosia against the continued Turkish occupation in Cyprus . See for yourselves and listen to the voice of the people, the young, the very voice they want to shut up, and they do not want to show to the outside world.

The Cyprus Action Network of America (CANA) is a grass-roots, not-for-profit movement created to support genuine self-determination and human rights for the people of Cyprus.

To be added to CANA’s Action Alert e-mail distribution list, or to introduce CANA to a friend or colleague, please forward the pertinent name and e-mail address, with the subject heading “Add e-mail to CANA distribution list”, to [email protected]

You are encouraged to forward this action alert to five or more individuals who may have an interest in our e-distributions or in CANA’s mission.

You may post any CANA article, press release or action alert on the internet as long as you credit CANA and the author(s).