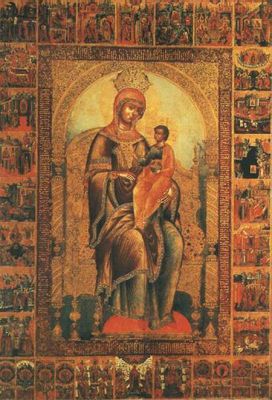 The Washington Times
By Julia Duin

Religious artifacts on the divided island of Cyprus are in “great peril,” according to a U.S. Helsinki Commission document to be released Tuesday afternoon.

Thousands of Orthodox icons, manuscripts, frescoes and mosaics have been looted from churches, chapels and monasteries in northern Cyprus, ending up on international auction blocks, says the document, the result of a lengthy investigation by the Helsinki Commission and titled “Destruction of Cultural Property in the Northern Part of Cyprus and Violations of International Law.”

A copy of the 50-page document was provided to The Washington Times in advance of a Tuesday press briefing and panel discussion on Capitol Hill.

The panelists will include Charalampos Chotzakoglou, professor of Byzantine art and archaeology at Hellenic Open University in Patras, Greece; German art historian Klaus Gallas, who is a specialist on the international smuggling of art artifacts; and Michael Jansen, author of “War and Cultural Heritage: Cyprus after the 1974 Turkish Invasion.”

Most of the ruined property belongs to the Orthodox Church of Cyprus, one of the world’s oldest national Orthodox churches, with the rest belonging to Catholic, Armenian Orthodox, Maronite and Jewish groups.

Thirty-five years of occupation of Northern Cyprus by Turkish forces have ruined “a plethora of archeological and religious sites,” says the report, which adds that the United Nations Educational, Scientific and Cultural Organization (UNESCO) has been documenting the destruction since 1984.

According to the report:

A staff member for the Helsinki Commission said a copy of the report had been sent to the Turkish Embassy in Washington, but an embassy spokesman said it had not been received.

“It sounds like a one-sided presentation,” said the embassy spokesman, who asked to remain unidentified because he was not authorized to comment on the record.

“There’s no input from the Turkish side. There is no coincidence the report is coming out this week because it’s the 35th anniversary of the intervention by Turkey. Turkey respects all cultural heritages,” the spokesman said.

The Turkish Embassy spokesman pointed out a Nov. 28, 2001, letter from Tahsin Ertugruloglu, foreign affairs minister for the self-styled Turkish Republic of Northern Cyprus, that said Greek Cypriots destroyed Muslim shrines and mosques in 103 villages between 1963 and 1974.

The report by the U.S. Helsinki Commission, which monitors compliance with agreements among members of the Organization for Security and Cooperation in Europe, included this claim by Turkey. But the report also added that Cyprus, which exercises effective control over the southern two-thirds of the island, has spent about $600,000 since 2000 to renovate 17 historic mosques.

According to the report, the 77 churches converted into mosques have texts from the Koran inscribed where icons and paintings used to be; the St. Anastasia monastery is now a hotel with a swimming pool and casino; and the Byzantine-era monastery of Antiphonetes has had its icons and murals removed and sold to art dealers.

Jerome Bowers, a Northern Illinois University associate history professor who recently returned from studying in Cyprus, said in an e-mail that while Greek Orthodox artifacts in Northern Cyprus have been damaged, the stolen goods have been smuggled out of Cyprus mostly through the southern part of the island.

“There can be no denying the fact that the destruction of religious cultural artifacts in the south has also taken place,” he wrote. “In Paphos, for example, the Camii Cedit was not only destroyed but replaced with a parking lot, and the square surrounding the location is now called March 9th Square, named for the date of the mosque’s destruction.”

The Christian church has ancient roots in Cyprus. Visited in A.D. 45 by the apostle Paul along with his co-workers Barnabas and Mark (as recorded in Acts 13:4-12), it was ruled by Byzantine emperors for hundreds of years. It was during this time that the vast majority of churches were built in the region and decorated with brightly colored frescoes and tiled mosaics.

In 1571, the island fell under the control of the Ottoman Turks, and in 1878, the British took over. The native Cypriots are divided into two camps: 80 percent Greek speakers and 18 percent ethnic Turks, with the remaining 2 percent divided among Armenians, Maronites and Latin-rite Catholics.

According to the report, the Greek government, with the help of Cypriot armed forces, forced out Archbishop Makarios, the first democratically elected president of the island, on July 15, 1974.

Turkey invaded five days later, taking over the northern 37 percent of Cyprus, ostensibly to protect Turkish-speaking inhabitants. Several years later, the Turkish Republic of Northern Cyprus was established, though no country in the world besides Turkey recognizes it. The Greek Cypriot-led Republic of Cyprus claims to be the sole legitimate government of the whole island, a claim every country in the world except Turkey accepts.

The report says there are 660,000 Greek Cypriots living on the island’s southern part, 89,000 Turkish speakers in the north and 43,000 Turkish soldiers serving as an occupying force.

Hilmi Akil, the Washington representative for the Turkish Republic of Northern Cyprus, dismissed the Helsinki Commission report as “a propaganda exercise,” adding that Turkish Cypriot and Greek Cypriot leaders recently agreed to set up a joint committee on cultural heritage matters.

“The theft of cultural artifacts takes place everywhere, including South Cyprus,” he said. “What we’re objecting to is destruction, which has happened on both sides of the island, is being portrayed as something that only Turkish Cypriots have done.”