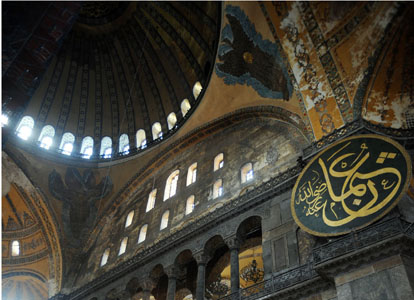 Experts have uncovered one of the six angel mosaics within the world-famous Hagia Sophia Museum in Istanbul after it had been hidden for 160 years behind plaster and a metal mask.

The mosaic, which measures 1.5 meters by 1 meter, was last seen by Swiss architect Gaspare Fossati, who headed restoration efforts at the museum between 1847 and 1849, and Ottoman Sultan Abdülmecid. Experts were surprised to see that the mosaic, believed to date from the 14th century, was so well preserved.

Hagia Sophia, built by the Byzantine emperor Justinian between A.D. 532 and 537, was originally a basilica before it was converted into a mosque when Ottoman Turks conquered the city in 1453. During the conversion process, the Ottomans covered the mosaics with plaster instead of removing them.

The building served as a mosque until 1934, when it was turned into a museum.

The uncovered mosaic is located in the pendentive, an arched triangular section supporting the building’s huge dome. After 10 days of work on the area, experts removed several layers of plaster and the metal mask to uncover the angel.

The mosaic’s true age will be assessed after an analysis by the Hagia Sofia Science Board compares it to similar mosaics. The six-winged figure is though to depict the seraphim, an angel described in the biblical book of Isaiah.

When the plaster covering the mosaics began to fall off, Sultan Abdülmecid ordered Fossati to remove all the old plaster, restore the mosaics and cover them up again. A book prepared by Fossati at the time is seen as the main source about mosaics that did not survive to the present day.