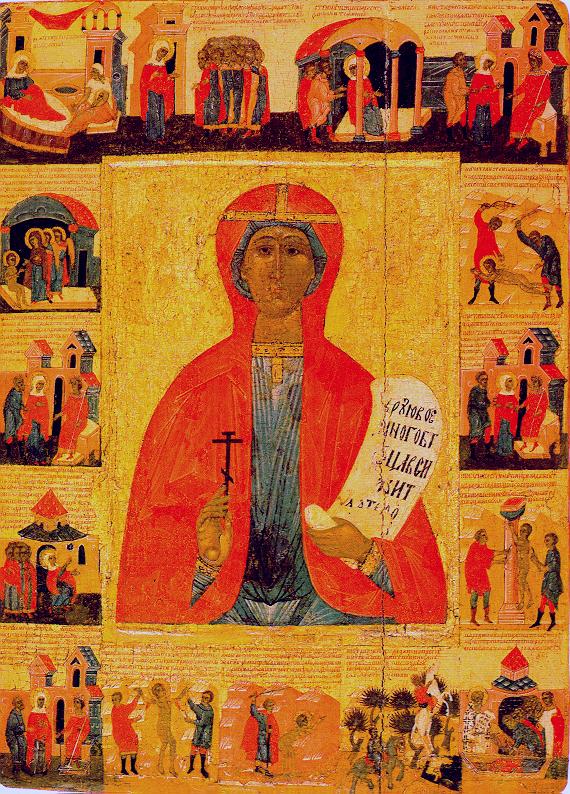 Parasceva was born in Rome of Christian parents and from her youth was instructed in the Faith of Christ. With great fervence, St. Parasceva endeavored to fulfill all the commandments of God in her life. Believing strongly and living according to her faith, Parasceva directed others on the path [of salvation] with the help of the True Faith and pious living. When her parents died Parasceva distributed all of her property to the poor and was tonsured a nun. As a nun she preached the Faith of Christ with an even greater zeal, not hiding from anyone, even though at that time the Roman authorities bloodily persecuted the Faith of Christ. First the pernicious Jews accused St. Parasceva of preaching the prohibited Faith. She was brought to trial before Emperor Antoninus. All the flatteries of the emperor did not help in the least to cause her to waver in the Faith. They then subjected her to fiery torments and placed a red-hot helmet on her head. The Lord miraculously saved her and Parasceva was delivered and left Rome. She again traveled from city to city to convert the pagan people there to the True Faith. In two more cities she was brought before princes and judges and was tortured for her Lord, at the same time working great miracles and by the power of God quickly recuperated from her pains and wounds. The pagans, as always, ascribed her miracles to magic and her power of recovery to the mercy of their gods. St. Parasceva once said to the prince who tortured her: “It is not your gods, O prince, who healed me but my Christ the True God.” Finally Prince Tarasius beheaded her. Thus this saint gloriously ended her fruitful life. Her relics were later translated to Constantinople. She suffered honorably for Christ in the second century.