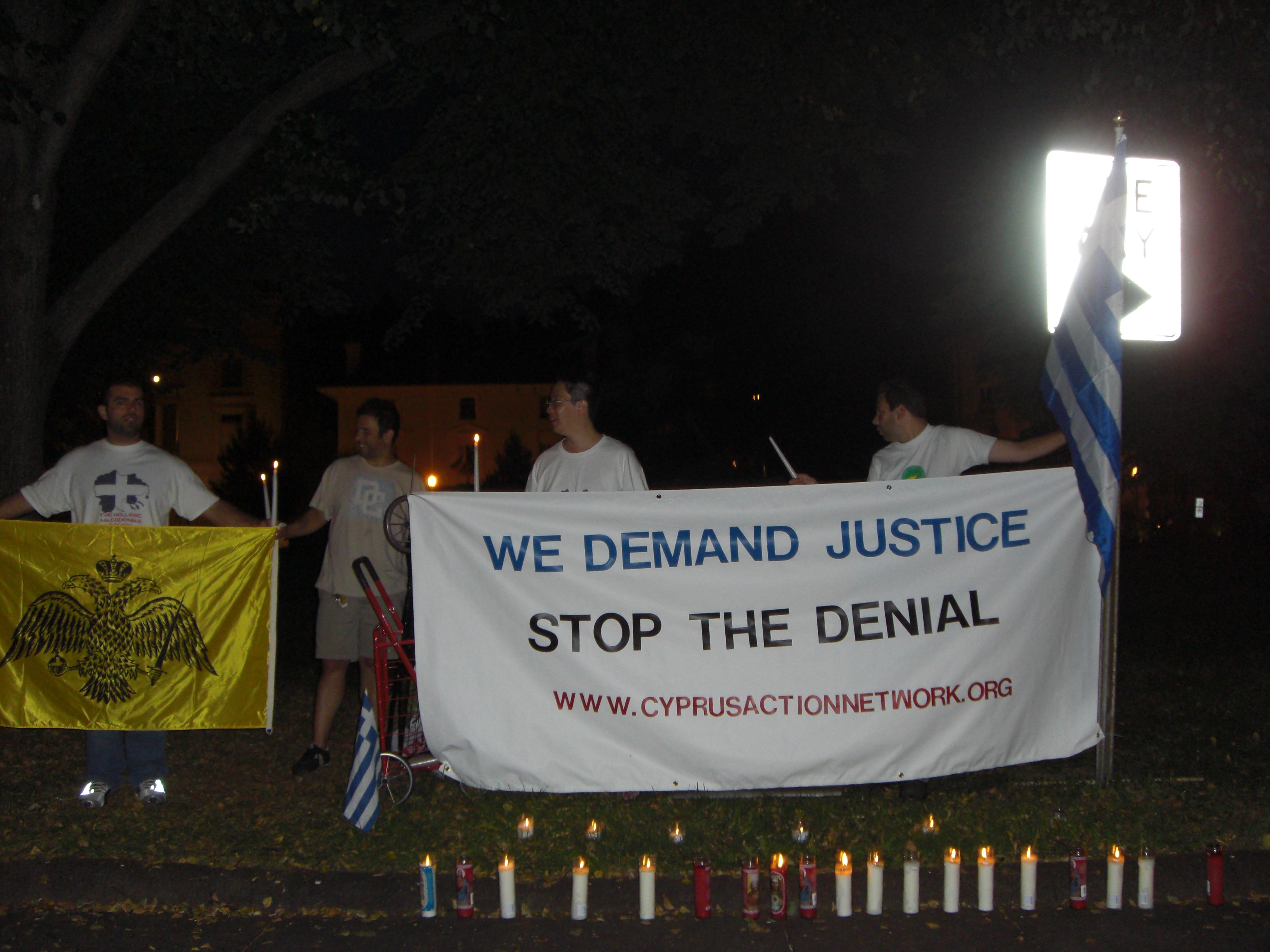 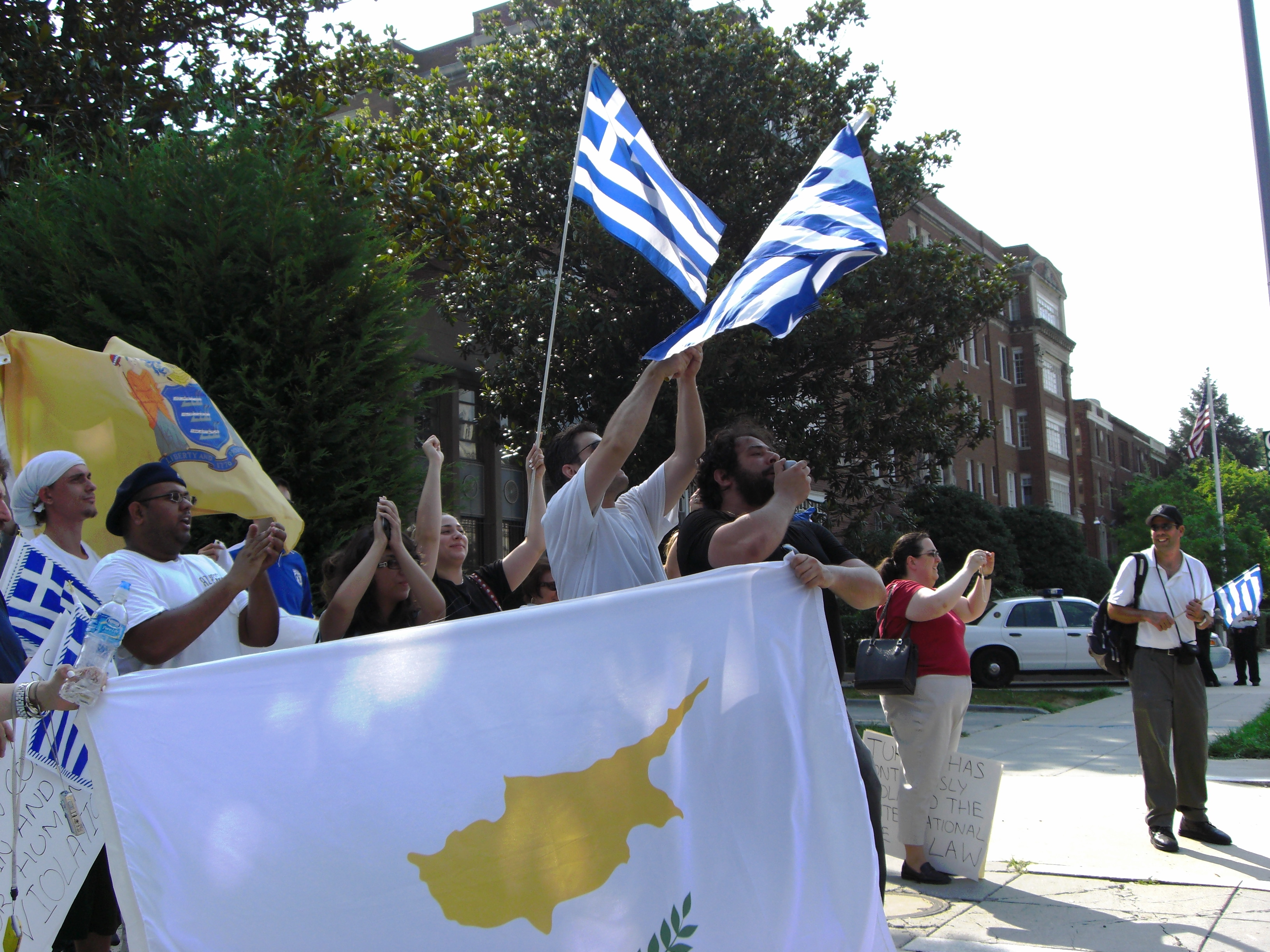 NEW YORK–The Cyprus Action Network of America (CANA) is pleased that the fervor for justice is growing stronger with each passing year, as much as the Greek and Cypriot establishment and lobby groups with their political ineptitude and personal agendas would like to bury this issue of memorialising 20th of July with muddled messages and talks (to the tune of bouzoukia and baglamades) on so-called «solutions» that involve so-called «federations» with the very criminals who perpetrated a HOLOCAUST on Greek-Cypriots,we say NEVER AGAIN. We will not be silent , and we are not going away.

Photos taken during our 18 hr Cyprus Vigil outside the Turkish Ambassador’s residence in Washington DC at Sheridan Circle/Park on July 19-July20 ,2009 are available for download at the ‘Pictures’ page on our website:

The CANAgrassroots Youtube channel is posting Videos on the Cyprus Vigil 2009, please view and distribute:

Also check out the Turkish Lobby setting up the counter-demonstration at 9AM outside their own Turkish Embassy in Washington DC on July 20, 2009 (notice the many flags of the illegal pseudo state and the red and yellow flags of the Pseudo-Macedonians)

Our Vigil in Washington DC was complimented by what was accomplished by our brothers and sisters in Nicosia in the sacred homeland who marched on to mark the 20th of July , this is the hope of the new generation , and all the ones after that will

Please view the videos and pics below and post them to your sites, blogs, facebook pages, twitter them and pass them on to your friends. Thousands poured into the streets on the 20th of July in Nicosia , a sea of youth, that fights on. The Slogans this year included «TURKI MOGGOLI DOLOFONI,– TURKS MONGOLS MURDERERS» and «KATO TA HERIA OMOSAPINDIAKI , I KYPROS EINAI ELLINIKI–HANDS OFF CYPRUS FEDERATIONISTS! CYPRUS IS HELLENIC!» and «STI KYRENIA TA SINORA MAS EINAI–OUR BORDERS ARE AT KYRENIA»

This video captures the march to the Ledra roadblock , they are singing a patriotic song about the liberation of our Hellenic land,

«I KYPROS EINAI ELLINIKI KAI I MAKEDONIA–CYPRUS IS HELLENIC! MACEDONIA IS HELLENIC!», as they approach Ledra Palace,

THIS VIDEO DOCUMENTS TURKISH BARBARIANS THROWING STONES AT OUR BROTHERS AND SISTERS FROM THE TOP OF THE DIVIDING WALL THIS 20th of JULY:

The Cypriot Student organization “METOPO” organized an excellent and at the same time very creative anti-occupational event on Sunday the 19th of July. Metopo are the only independent non-partisan Cypriot student movement in the UK and in the last student elections received 13% of the votes. They reject a solution based on a bi-zonal, bi-communal federation. (www.metopo.org.uk) They chartered a catamaran and sailed through the busy beaches of Lemesos with a huge banner which said ‘ΔΕΝ ΞΕΧΝΩ το ΔΕΝ ΞΕΧΝΩ’. (Do not forget the famous slogan of WE DO NOT FORGET WHAT HAPPENED IN CYPRUS)

It was in the main news bulletins of all Cyprus TV networks except of course RIK (CYBC) the channel the government controls. Shame on RIK !

Coincidentially, the Cyprus Federation of America also does not have the Bloody Map of Cyprus on its website, and instead shows a Cyprus without any lines through it, which seems to be the map the Turks insist on getting up(!)

On a sad note, several arrests were made in Cyprus, some reports say six people were arrested at the 20th of July demonstrations in Cyprus for openly speaking their mind about Communist Christofias and shouting out that he’s a traitor, luckily this story was picked up by the foreign press, Agence France Press reported that four people , other sources say six were arrested,in what seems to be a crackdown on dissent and a violation of free expression in Cyprus:

Please visit the Freedom for Cyprus blog (http://www.freedom4cyprus.blogspot.com/) and download pics and video of the demonstrations to send to friends and to post on the net. The 20th of July is not forgotten, they just want us to forget it, by posting a pic or video, or writing about these events or even sending out their commentary you will help to contribute and help stop those who are trying to hide the truth , and those that want to shut us up.

The Cyprus Action Network of America (CANA) is a grass-roots, not-for-profit movement created to support genuine self-determination and human rights for the people of Cyprus.

To be added to CANA’s Action Alert e-mail distribution list, or to introduce CANA to a friend or colleague, please forward the pertinent name and e-mail address, with the subject heading «Add e-mail to CANA distribution list», to [email protected]

You are encouraged to forward this action alert to five or more individuals who may have an interest in our e-distributions or in CANA’s mission.

You may post any CANA article, press release or action alert on the internet as long as you credit CANA and the author(s).