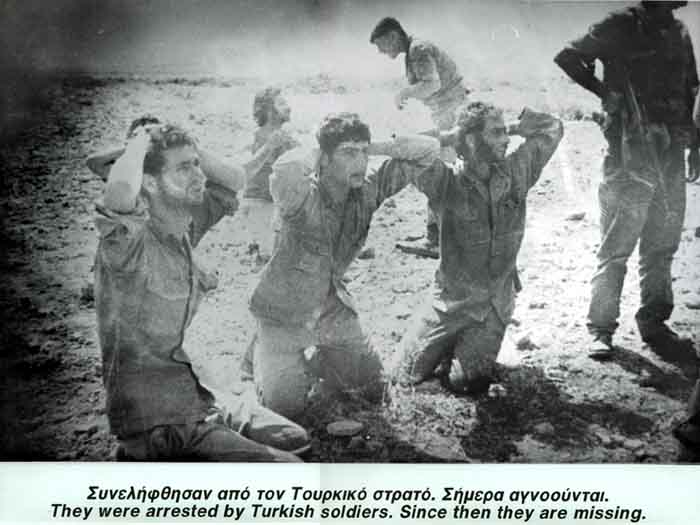 The remains of five Greek Cypriot POWs of the Turkish invasion of Cyprus in 1974, were found in a mass grave. The five prisoners of war, all of them soldiers of the Cypriot National Guard, reservists that had beel called up to active duty, all wearing their battle dress uniforms, had been photographed alive by a Turkish journalist at the time of their capture by the Turkish invasion forces; their remains were found during the excavations conducted by the Committee on Missing Persons (CMP, functioning under the auspices of the United Nations) at the occupied village of Tziaos, and identified using the DNA method.

The picture document of the five Greek Cypriot POWs, who had been captured on August 14th, 1974, has been repeatedly published both in the Cypriot and in the international press. Two days after they were captured, the Cypriot National Guard arrested the Turkish journalist Erkin Konuskever, in whose possession the photographic evidence were found. Konuskever later published the pictures in the Turkish newspaper “Millyet”.

The assistant to the Greek Cypriot representative to the CMP, Xenophon Kallis, stated that the families of the five missing soldiers were informed about the identification of their remains. Mr. Kallis further said that the same mass grave contained the remains of 14 more persons, but the rest have not been identified yet.

Speaking to RIK, the president of the Pancypriot Committee of Relatives of Unknown Prisoners and Missing Persons, Nikos Theodosiou, stated that “it is now a proven fact that the Turks used to shoot prisoners of war”.