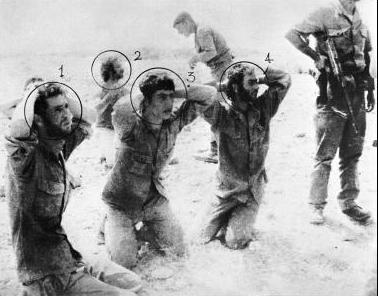 The Turkish army has been accused of war crimes during its illegal invasion in 1974 of Cyprus, which has provoked Greek Cypriots to prepare law suits to prosecute Turkey for war crimes. Following the discovery of human remains in a mass grave confirmed using DNA evidence to be the bodies of five Greek-Cypriot soldiers who appeared in an “iconic” photograph depicting the ferocious military attack instigated by Turkish troops on the Mediterranean island.

The families of the Greek Cypriots have said that the evidence found in the mass graves of the bodies to be that of the men presumed missing for 35 years, were in fact murdered in the custody of Turkish troops.

“It’s a cold-blooded execution,” Andreas Hadjikyriakos, a brother of one of the soldiers told Cyprus state TV. “I can never accept this.” (Associated Press)

The Associated Press in a report said:

“The remains of the soldiers and 14 other people were exhumed from an abandoned well in late 2006 near the northern village of Tziaos, Elias Georgiades, an official with the United Nations-led Committee on Missing Persons, said. He said the soldiers’ families were informed Friday that the remains had been identified.”

The Turkish government have made no comment on the reports and the Turkish army did not according to UNFICYP (the UN force in Cyprus) provide any sort of credible co-operation in the process of recognition of the remains.

The revelations of the mass graves comes on the day when the vice chairman of the parliamentary group for the “Friend of Cyprus” Andrew Dismore Labour MP for Hendon, and chairman of parliament’s human rights committee outlined how he was determined to pursue anyone who has committed war criminals and said in

“The UK must not be a safe haven for evil. The message to those who have perpetrated the most heinous crime imaginable must be clear: they are not welcome here, not to visit, not to live, not to holiday, shop or get medical treatment. The UK should close these loopholes in the law. We also need to establish a specialist war crime unit”.

The London Daily News has been made aware of London based Cypriot organisations preparing law suits against the Turkish government for war crimes that may implicate London based Turkish diplomats and citizens who have been accused of complicity in war crimes during the 1974 invasion of Cyprus. There are around 3,000 Greek-Cypriots living in the Hendon constituency of Andrew Dismore; which may according to senior sources in the Greek-Cypriot community provide enough justification to pressure the British parliamentary human rights committee to pursue Turks in the UK involved in war crimes in Cyprus in 1974.

A dossier of the information will be submitted, according to a senior Greek-Cypriot source, to the parliamentary human’s right committee for review on UK based Turks who were involved in war crimes in 1974.

The five men whose remains have been discovered are:

In January this year a leading Turkish actor confessed to murdering 10 Greek-Cypriots live on a Turkish talk show. Atilla Olgaç confessed that he executed in cold-blood ten Greek Cypriot prisoners of war during the Turkish invasion of Cyprus in 1974.