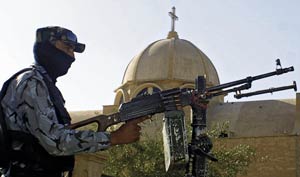 The complete islamization of the Muslim world in process…

In its 10th pastoral letter, the Council of Catholic Patriarchs of the Middle East examines the challenges facing Arab Christians across the region. The council issued the letter at a time this summer when Iraq was suffering new waves of bombings against Christian churches in Baghdad and in the Kurdish north. Entitled The Christian Arab Confronts the Challenges of Today, the letter was released in Arabic and French.

Long-term Developments. The current troubles, the patriarchs suggest, began in 1967 with the Six-Day Arab-Israeli war, followed by the Lebanese civil war, the Iraq-Iran war, the first Persian Gulf war and the U.S. invasion of Iraq in 2003. At the same time, they explain, the Arab world has suffered from underdevelopment, demographic expansion and the denial of rights by authoritarian governments.

Christians have suffered from these conditions along with their majority Muslim neighbors. These pressures, the council observes, result in emigration and sale of ancestral lands, hollowing out the Christian churches of the Middle East (Copts, Maronites, Melkites, Syrians, Chaldeans, Armenians and Latins, or Roman Catholics).

As religious minorities, the patriarchs report, Christians have also often suffered from discrimination and persecution. Their neighbors do not regard them as integral members of society, “as citizens, with the same rights and duties” as the majority but as “a people apart.” With the rise of extremist religious politics, moreover, they find that despite their efforts to participate in their societies and appropriate their Arab identity, they must live on the margin, even in modern Arab states.

Country Reports. In Iraq, the patriarchs report, sectarian violence afflicts the whole society, but Christians are kidnapped and murdered “because they are Christian.” In Egypt, interconfessional hostility flares up from time to time with the acquiescence of “the government or minor officials who permit themselves to harbor confessional attitudes [prejudices].”

In Lebanon, where Christians are a diminished but still influential minority, they experience various pulls. They find themselves simultaneously in alliance with some Muslims and opposed to others and divided among themselves. Political stability still seems out of reach.

Finally, in Palestine, Christians, like the majority Muslim population, share the suffering and the consequences of the Israeli occupation. Referring to Muslim-Christian tensions, the patriarchs allow that there are on the local level “incidents and clashes between individuals” that are exaggerated by the international media. In Israel, the letter reports, minority Christians experience hostility from some Israeli Muslims, including extremist groups, which inflame confessional “tension and fear.”

Peace and Pluralism. While some Arab Christians, the council says, “are firm in their faith and in their engagement in society,” others “are disheartened and no longer have confidence in their societies and their capacity to obtain for them equality with all citizens.” As a result, there is an age-old temptation “to retreat into their church and its institutions.”

The patriarchs reject this strategy as a symptom of weakness, however, and recommend that their people “find strength in the force of faith and love and in social engagement.” Seeing the fate of Christian communities intimately bound to the surrounding milieu, the patriarchs conclude, “insofar as society analyzes and corrects its attitudes toward ‘the least of these,’ toward those who are different by virtue of their religion or personal characteristics, it will become capable of achieving peace for all its citizens.”