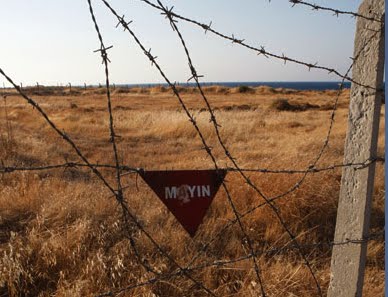 In a report (see here in Greek): http://www.kathimerini.com.cy/index.php?pageaction=kat&modid=1&artid=5374 in the Cyprus edition of Kathimerini, Andreas Paraschos writes of the existence of a mass grave containing the remains of between 800-1,000 Greek Cypriots located near the occupied village of Lapithos, in the Kyrenia district. The alleged site of the mass grave has been designated by the Turkish army as a military zone. It is fenced off with barbed wire and signs have been erected warning about mines, although the Turkish Cypriot daily Afrika, yesterday reported that ‘everyone can walk around in that area as he wishes. No mines have been found until now.’

Paraschos refers to the testimony of Savvas Mastrappas, enclaved in Lapithos until 28 October 1975 and who, after coming to the free areas, gave details to the Cypriot police of the mass grave; and to more recent witness accounts from Turkish Cypriots, who confirmed the existence of the mass grave, declaring its existence an ‘open secret’ among Turkish Cypriots in the region, some of whom, indeed, would periodically dig up the site and remove skeletons for medical studies.

From March 1977, Savvas Mastrappas gave a series of depositions to the Cyprus police in which he described what he knew of the places of burial of Greek Cypriots killed by Turkish invasion forces. In one of these depositions, Mastrappas says: ‘In July 1974, when the invasion occurred, I remained with my wife in our village [Lapithos]. I came to the free areas in October 1975. Apart from us, in Lapithos there must have been 40-50 other Greek Cypriot enclaved. Because I knew a little Turkish and other languages, the Turks put me in charge of the enclaved and I moved around somewhat more freely than the others. Four or five days after the fall of Lapithos, a Turkish Cypriot I knew called Ahmet from the [Turkish Cypriot village of] Photta came to our village, along with a police officer called Nizet. Ahmet came to my house and during conversation told me that the Turkish police observed the collection of between 800-1,000 Greek Cypriot bodies from the region of Lapithos and Vasilia, who were then buried in a place known as “Agni”, close to the little harbour, where the villagers from Lapithos kept their fishing boats…’

In another part of his deposition, Mastrappas says: ‘One day, it must have been around October-November 1974, when I went with a Turkish policeman named Mehmet – I think he was from the village of Kazaphani – and with a Briton from the British embassy, to the place known as “Koufi Petra”, so we could place a British flag on a house there owned by a Briton, I noticed a fire in the place known as “Agni”, just east of the orchards of Savvas Frantzieskou. Mehmet told me it was the Turkish army that had started the fire, in order to burn the bodies of Greek Cypriots uncovered by the rain. And, indeed, two-three days previously, it had rained heavily…’

Paraschos then goes on to report that on a recent visit to Lapithos, he spoke to Turkish Cypriots in the area, and one said to Paraschos: ‘I’ll take you to a place near the sea where missing persons are buried.’ I asked him: ‘How do you know there are missing buried there?’ ‘It’s an open secret here in Kyrenia and many Turkish Cypriots know that some people dug up skulls for medical purposes.’

According to this Turkish Cypriot, Paraschos writes, a teacher-friend of his told him that he dug up a skull for his daughter, who was training in medicine. Indeed, when this teacher-friend wanted to get hold of a skull for his daughter and started asking around where he could get one, he was told at the local cafe that many others had similar ‘needs’ and that the only way was to enter the fenced-off area and dig up Greek Cypriot dead. ‘Don’t be scared,’ he was told, ‘you won’t be the first. Others have done the same.’ And this is what he did. Despite his fear that since the area was fenced-off as a military zone, he went there, waited for a while, to see if there was any soldiers patrolling the area and when he saw there was not, he entered, dug, found what he was looking for, took it and left…