“These Truths We Hold” (Part XIV)

“These Truths We Hold” (Part XIV) 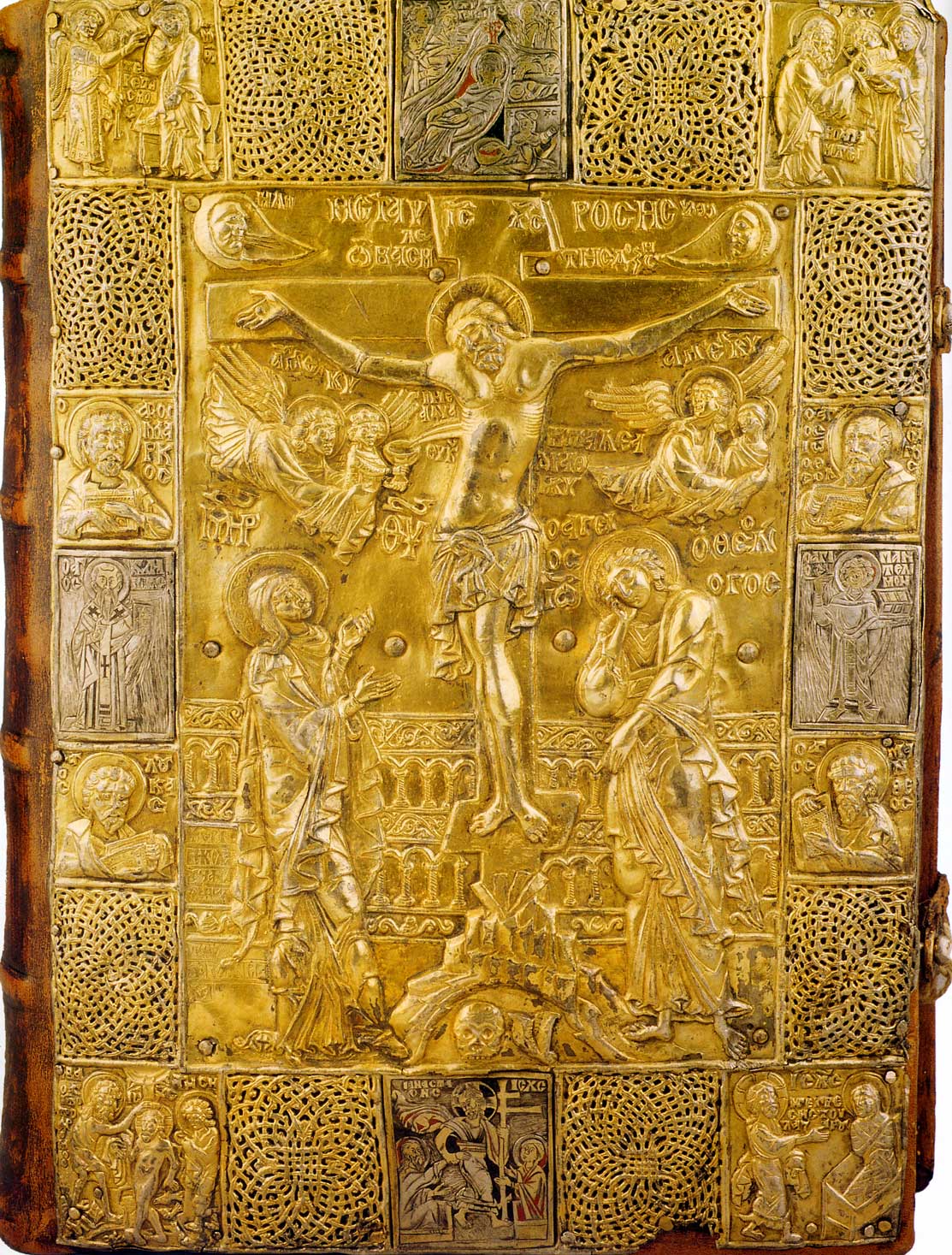 The Liturgical books used in Orthodox worship fall into three main groups. The first of these are three books containing readings from Holy Scripture. These are the Book of Gospels, the Book of Epistles (Apostol), and the Book of Psalms (Psalter).

This book contains the text of the four Gospels (Matthew, Mark, Luke and John) ar-ranged in sections called pericopes (or zachalo in Russian). This book normally rests on the Holy Table, and is customarily treated in the same way as the Holy Icons, itself being regarded as an Icon of the Savior in His teaching ministry.

This contains the readings from the Acts of the Apostles and the Epistles for the whole year — i.e., the entire New Testament outside of the Gospels and the Apocalypse (Revelation) of St. John. It too is divided into pericopes and also includes the Prokeimena and Alleluia verses which precede and follow the Epistle readings.

The Psalter contains the 150 Psalms of David, divided into twenty Kathismas, as well as the text of the Nine Biblical Canticles sung at Matins.

The Division of the Psalter in Kathismas***

The Kathismas are here divided into their respective Stases or divisions. They are numbered according to the Hebrew rendering. The Septuagint (LXX) divisions are to be found within the parentheses.

The Old Testament lessons, usually read at Vespers, are not normally found in a separate book. These are usually found in appropriate sections of the Triodion, Pentecostarion or Menaion, as the case may be.

The next grouping of Liturgical books are those pertaining to the fixed parts of the ser-vices, which usually do not change according to the season or Saint. Among these are the Eucho-logion and the Book of Hours.

The Euchologion (or Book of Prayers) is for the use of the Priest and Deacon and contain the Sacraments and other services, as well as many special prayers and blessings. The Eucholo-gion is usually divided into several books:

This contains the fixed parts of Vespers, Matins and the Liturgy (primarily the Priest’s parts), the six remaining Sacraments (Baptism, Chrismation, Holy Orders, Confession, Marriage, Anointing of the Sick), and other services (Monastic Profession, Consecration of a Church, Blessing of Waters, etc.).

This is an Altar Book containing primarily the Priest’s parts at Vespers, Matins and the Divine Liturgy.

This book contains five of the Sacraments (the Divine Liturgy and Holy Orders are omit-ted), the Funeral Service, and various other services commonly used.

This is a special book of prayers and blessings used by the Bishop.

The Great Book of Hours (Greek — Horologion) is a Choir book for the use of the Read-er and Singers. It contains the fixed portions of the Daily Offices (Vespers, Matins, etc.) with most of the Priest’s and Deacon’s parts omitted. It also contains a list of Feasts and Saint’s days throughout the year as well as appropriate Troparia and Kontakia for each. In addition there is a section containing Troparia and Kontakia for Sundays and movable Feasts of the period of the Triodion and Pentecostarion, as well as Theotokia for the whole year. There are also contained in this book various Canons and other services in frequent use. In the Russian Church, there is also an abbreviated form of the Great Book of Hours, called simply the Book of Hours (Russian — Chasoslov).

For the movable parts of the services (those which change every day) there are four vo-lumes constituting the three main cycles of the Church Year: 1) the Weekly Cycle — Octoechos; 2) the Annual Cycle of Movable Feasts — Triodion and Pentecostarion; and 3) the Annual Cycle of Fixed Feasts — the Menaia.

The Octoechos (or Book of the Eight Tones) contains the movable parts of the Daily Of-fices sung throughout the week. Eight series of Offices, one for each of the Eight Tones, are pro-vided, within which are seven sets of services, one for each day of the week. The First Tone be-gins on St. Thomas Sunday and proceeds in sequence each week until Tone Eight is completed, at which time the whole cycle is repeated. The texts of the Octoechos are combined, more or less, with fixed Feasts from the Menaia, and on Saturdays and Sundays during Great Lent (except from Lazarus Saturday to the Sunday of All-Saints).

This book, characterized by its extensive use of Three-Ode Canons (although there are al-so some Four-Ode Canons contained within), is generally termed the Lenten Triodion, within which are found the Texts for the services of Great Lent.

This companion to the Lenten Triodion (often called the Flowery Triodion) contains the texts from Pascha to the Sunday of All-Saints (the first after Pentecost).

This book is divided into twelve volumes (corresponding to the twelve months) and con-tains the texts for the fixed Feasts of each day of the year. In addition, there is sometimes found two companion volumes which contain certain texts from the major Fixed Feasts (the Festal Me-naion) or general Offices for certain classes of Saints (the General Menaion).

In addition to these three main groups of liturgical books, there are two further books — the Irmologion and the Typikon.

This book gives the texts of all of the Irmosi (or Theme Songs) sung at the beginning of the various Canticles of the Canon. Often some editions of the service books, such as the Menaia and Triodion, only give the opening words of the Irmos, necessitating the use of the Irmologion, which provides the full texts.

This book contains the rules and rubrics governing every aspect of the Church services and their celebration throughout the year. According to Church Tradition, the Typikon was drawn up by St. Sabbas of Jerusalem (f532) and later revised by St. Sophronius, Patriarch of Je-rusalem (tea.638). A further revision was made by St. John of Damascus (tea.749), a Monk at St. Sabbas’ Monastery, hence the name — the Jerusalem Typikon of St. Sabbas’ Monastery.

In 1888, a new edition of the Typikon was prepared at Constantinople, which, in modern times, is used primarily by the Greek-speaking Churches. The Church of Russia, as well as, for the most part, the Orthodox Church in America, still adheres to the Jerusalem Typikon, as do the older Greek monasteries, such as those of Mt. Athos, St. Sabbas at Jerusalem, and St. John on Patmos.

The first three hymns sung at the Divine Liturgy (Ps. 103; Ps. 146 and “Only-begotten Son…” the Beatitudes) are called Antiphons (steps) because they are sung in steps or stages by two Choirs singing opposite each other. Hence this type of singing in steps is called antiphonal.

These are Stikhera accompanied by verses usually taken from the Psalms. The Apostikha is found at the end of Vespers and also at the end of Matins on ordinary weekdays.

The Canon is a series of nine Canticles (or Odes) containing a number of Troparia in each, as well as a Theme Song (Irmos). The Canons are found at Matins, Compline, and certain other services in the Liturgical Cycle. Originally the nine Biblical Canticles were sung and short refrains inserted between each verse of the Canticle, but in time the Canticles themselves dropped out of general usage (except during Great Lent) and only the Theme Song (or Irmos), based on the theme of the original Canticle, and the refrains (now expanded) remained. The Second Ode is sung only as part of the Lenten Cycle and a tenth Biblical Canticle, the Magnificat is almost always sung after the Eighth Ode of the Canon.

This is a musical composition sung at Vespers and are so named because they speak of the dogma of the Two Natures of Christ.

This is a short composition that follows the Kontakion, between the Sixth and Seventh Odes of the Canon.

This is the Theme Song of each Ode of the Canon. The word Irmos means link, since originally the Troparia that followed it were sung in the same rhythm, and thus were linked to it.

This is the concluding stanza of a Canticle of the Canon, so-called because, as the title implies (to go down), the Choir members came down into the center of the church to sing it. These are found after each Ode of the Canon on major Feasts and on ordinary days, the Irmos of the last Canon sung (there are usually several Canons sung together) is sung as Katavasia after Odes Three, Six, Eight and Nine.

From the word kathizo — I sit, these are selections from the Psalter, read at Vespers, Ma-tins, and various other services, during which the Faithful are permitted to sit.

These are short hymns sung after the Kathisma readings, during which the Faithful are permitted to sit (except for certain prescribed days). These are sometimes referred to as Sedalens or Sessional Hymns.

The word means pole, since the Kontakion was originally a long poetic composition rolled up on a pole. Now only the brief preliminary stanza remains and is sung before the Ikos after the Sixth Ode of the Canon, at the Liturgy, Hours, and various other services.

A Stikheron is a stanza sung between verses taken from the Psalms, primarily at Vespers (at “Lord, I have called…” and the Apostikha) and Matins (at the Apostikha).

These are Troparia or Stikhera sung in honor of the Theotokos. On Wednesdays and Fri-days, these Theotokia usually take the theme of the Theotokos at the Lord’s Crucifixion, and thus are called Cross-Theotokia (or Stavro-Theotokia).

This is simply a short musical composition similar in length and style to the Kontakion. They are sung at the end of Vespers, after “God is the Lord…” and the Apostikha at Matins, at the Liturgy and other services.

This is a short Troparion sung at Matins on Great Feasts and Sundays.