“These Truths We Hold” (Part XXII)

“These Truths We Hold” (Part XXII) 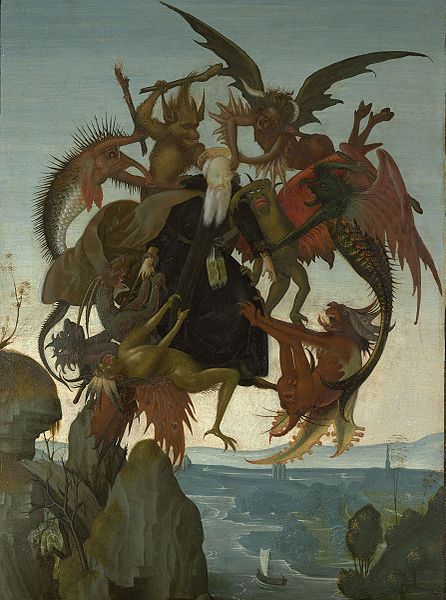 The Torment of Saint Anthony. painting of Michelangelo c. 1487-­88

It is generally accepted that monasticism began in Egypt towards the end of the Third Century, though its origins may have been older. Indeed, some form of monasticism may have existed almost from the birth of the Church. As the word monastic implies (in Greek monos — alone), the Monk was one who went into the desert to live alone with God. (Such were also called hermits (or anchorites), which means solitaries.) The first recorded hermitic Orthodox Christian literature was St. Paul of Thebes († 341) who lived over sixty years in a cave in the Egyptian desert. But the greatest of these hermits, often called the Father of Monasticism, was St. Anthony the Great († 356). Yet, even in the life of this father of monasticism, the desert solitude was gradually modified by the appearance of disciples. These men wished to pursue the monastic life under the guidance of one who was already experienced. A soldier marching into battle would much rather be commanded by an experienced officer than an inexperienced one, no matter how educated the latter may be. Nor, if he himself is inexperienced, would he wish to enter the battle alone.

Thus, after struggling many years as a solitary, St. Anthony gathered to himself a community of Monks who lived in separate huts, each working out his own salvation in his own particular way, but under Anthony’s supervision, guided by his great experience in spiritual life.

Anthony knew, however, the difficulties of the solitary life and he strongly approved of the establishment of the coenobitic or common life, as it was perfected by another Egyptian father, St. Pachomius the Great (†348). In his coenobitic communities the Monks all lived together in one place, everything being held in common (there being no private property), and the individual Monk was under the strict supervision of a spiritual elder (or starets — in this case Pachomius himself). There were still solitaries inhabiting the surrounding desert, and sometimes the elder would himself choose to live more frequently in the desert than in the more populated central community.

Eventually the central community became the norm of monasticism and the solitary life the exception. Whenever we see examples of solitary monastic life in later Saint’s lives, we see it entered into almost exclusively by those who had already acquired considerable experience in communal monastic life. Even as great an ascetic as Saint Seraphim of Sarov pleaded for a long time before he was given permission to withdraw into the forest outside of his monastery in order to pursue the solitary life. Thus, in time, the communal, coenobitic form became the preferred form of Orthodox monasticism and thus, the overwhelming majority of Orthodox monastic communities in the world today are coenobitic communities.

In a coenobitic monastery each of the Monks live in a separate room, called a cell, wherein he sleeps and performs his private rule of prayer (the cell-rule) given to him by his elder. All of the Monks assemble together for the Divine Services, for the common meals (or trapeza) in the Refectory (often called the Trapeza or Dining Hall) and in common work. The head of a coenobitic monastery is the Abbot (or Igumen (Hegumen), meaning leader) or, if the monastery were particularly famous, the higher ranking Archimandrite (chief of a fold). In some monasteries under the direct supervision of the Primate of the Church (who is often called, in such cases, the Great Abbot) a deputy will be appointed (called, in Russian, Namestnik or one who acts in the name of the Abbot — Deputy Abbot).

In the 14th Century, on Mt. Athos (a monastic republic which has existed on one of the peninsulas of Greece since the 10th Century), there appeared a relaxed form of the coenobitic monastery called the idiorrhythmic monastery (meaning personal way or manner) in which many of the communal rules were greatly altered. Monks were allowed to hold private property, they often cooked for themselves in their own cells, and were not strictly required to attend all Divine Services as a community. This form of monasticism, for a time, held sway on Mt. Athos, but at the present time only a minority of the monasteries there, and in the world as a whole, are, in fact, idiorrhythmic.

Another form of monastic life which developed was the skete life, so-called for the famous Egyptian community of Scetis which originated this form. The skete life has often been called the royal or middle path of monasticism, midway between the extreme rigors of solitary life and the common life. A skete, which in modern times is usually situated on the lands of a sovereign monastery, is, in effect, a small monastic village, consisting of a small number of Monks living a stricter ascetical life prayer.

Skete life can take one of two different forms: a) the idiorrhythm skete, which consists of separate houses surrounding a small church, in which the Divine Liturgy is usually served on Saturdays, Sundays and Feast Days. The Daily Services are said in a chapel to be found in each house, and the general rules of monastic life are the same as in idiorrhythmic monasteries (the holding of private property, etc.), and b) the coenobitic skete, which consists of the common life typical of the coenobitic monasteries in a main house with Daily Services celebrated in common in the Skete church. As in the idiorrhythmic sketes, Divine Liturgy is celebrated only on Saturdays, Sundays and Feast Days.

Finally, there were also to be found hermitages on the monastery lands (and elsewhere), where those who had especially progressed in the monastic life were allowed to live as solitaries. In such cases the hermit was granted a food ration from the main monastery, usually brought to him by Monks of the monastery, for the hermit rarely, if ever, left his hermitage, where he spent his remaining earthly days in strict solitude and ceaseless prayer, just as had the ancient solitaries of Egypt, Palestine, Syria, and other places.

Considering the predominance of coenobitic monasticism, if the origin of monasticism was the solitary life and the Monk is, by definition, alone, why, then, did monasticism become essentially communal? Why does the Church even seem to discourage those who would lead a life of solitude? Is this not a departure from the essence of monasticism?

The answer lies in that physical solitude is not the essence of monasticism, for this essence is, in fact, the struggle to cast out the very root of man’s sinfulness: pride and self-will. The First Sin was none other than the desire to live by man’s own will rather than the will of God. It was the desire to be independent, to be as God in a manner that would free man from obeying anyone but himself. This is the sin that caused the Fall of man and which is at the origin of virtually every sin we commit. I steal when my desire to possess surpasses all other thoughts or reason. I lie when my desires overcome reality. I hate when someone stands in the way of what I want. I do not pray when I am the center of my universe, and not God.

Pride and self-will can be eradicated only through the acquisition of their opposites: humility and obedience. A Monk leading a totally solitary life is rarely in a position to effectively test either of these qualities. A humble attitude towards God is genuine only if accompanied by humility towards fellow-men. Obedience to God is empty unless one is able to obey others. Instead of learning humility and obedience, the Monk who lives alone runs the serious risk of falling into a special form of pride, prelest, a Russian word sometimes translated as spiritual self-deception. The Monk takes pride in his ascetic labors, in his saintly manner of life and in this state, he can be completely lost, since true monastic sanctity is always self-accusing, always mourning its sinfulness. The more severe the asceticism, the greater the danger of prelest.

Humility and obedience can best and most-safely be acquired through the total surrender of the Monk to an instructor experienced in the spiritual life. The Monk confesses even his most intimate thoughts to his elder and does nothing without his blessing. The former teaches humility, the latter teaches obedience.

The problem of pride and self-will is, as we have said, common to all mankind. Obviously, it is not only Monks and Nuns who must struggle to replace them with humility and obedience. True monastic life, however, especially under the direction of an elder, is exceptionally conducive to that particular struggle. The life of a Monk is specifically regulated to the acquisition of these virtues. Life outside the monastery, with its own responsibilities and preoccupations, makes it difficult to discern the state of one’s soul and concentrate on the acquisition of spiritual virtues.

For this reason, Orthodox Christian men and women, clergy and laity, have been flocking to the monasteries for over a millennium and a half. They came to learn from those who are, in a sense, at the front line of battle. They came to learn from the experienced, to obtain advice for success and consolation in failure. They were greeted with love, compassion, and deep understanding. They learned that they were not alone in their struggles, that others had suffered as they did. They returned to their homes strengthened, encouraged and wiser, better-equipped to continue the struggle in their own daily lives.

And so, the goal of monasticism was not one of ego and self, but of love of God and the desire to set aright the pernicious influences of pride, self-will and disobedience. Monastic life elevates a Monk to spiritual perfection in the light of Christ’s love and, by living in this love, bears light and spiritual warmth to the world. By withdrawing from the world, a Monk does not express contempt for it, but, on the contrary, acquires a perfect love for the world, a pure love in Christ which is alien to worldly passions. By turning away from vanity the Monk strives to perceive himself and his impotence, and to fortify himself spiritually through prayer to God. And thus is was that it was to the monasteries that the faithful turned in order to acquire help and encouragement in their own daily spiritual struggles.