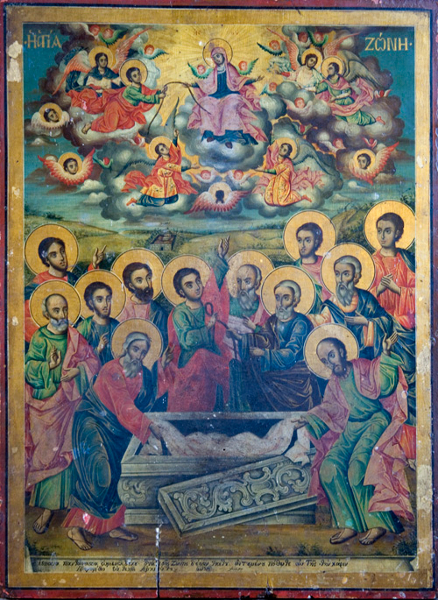 The Virgin, after her assumption, hands over her Belt to the Apostle Thomas. An icon of the Holy and Great Monastery of Vatopedi on Mount Athos, in which the Holy Belt is kept.

Little is recorded of St. Thomas the Apostle, nevertheless thanks to the fourth Gospel his per-sonality is clearer to us than that of some others of the Twelve. His name occurs in all the lists of the Synoptists (Matthew 10:3; Mark 3:18; Luke 6, cf. Acts 1:13), but in St. John he plays a dis-tinctive part. First, when Jesus announced His intention of returning to Judea to visit Lazarus, “Thomas” who is called Didymus [the twin], said to his fellow disciples: “Let us also go, that we may die with him” (John 11:16). Again it was St. Thomas who during the discourse before the Last Supper raised an objection: “Thomas saith to him: Lord, we know not whither thou goest; and how can we know the way?” (John 14:5). But more especially St. Thomas is remembered for his incredulity when the other Apostles announced Christ’s Resurrection to him: “Except I shall see in his hands the print of the nails, and put my finger into the place of the nails, and put my hand into his side, I will not believe” (John 20:25); but eight days later he made his act of faith, drawing down the rebuke of Jesus: “Because thou hast seen me, Thomas, thou hast believed; blessed are they that have not seen, and have believed” (John 20:29).

This exhausts all our certain knowledge regarding the Apostle but his name is the starting point of a considerable apocryphal literature, and there are also certain historical data which sug-gest that some of this apocryphal material may contains germs of truth. The principal document concerning him is the “Acta Thomae,” preserved to us with some variations both in Greek and in Syriac, and bearing unmistakeable signs of its Gnostic origin. It may indeed be the work of Bardesanes himself. The story in many of its particulars is utterly extravagant, but it is the early date, being assigned by Harnack (Chronologie, 2:172) to the beginning of the third century, be-fore A. D. 220. If the place of its origin is really Edessa, as Harnack and others for sound reasons supposed (ibid. p. 176), this would lend considerable probability to the statement, explicitly made in “Acta” (Bonnet, cap. 170, p.286), that the relics of Apostle Thomas, which we know to have been venerated at Edessa, had really come from the East. The extravagance of the legend may be judged from the fact that in more than one place (cap. 31, p. 148) it represents Thomas (Judas Thomas, as he is called here and elsewhere in Syriac tradition) as the twin brother of Je-sus. The Thomas in Syriac is equivalant to didymos in Greek, and means twin. Rendel Harris who exaggerates very much the cult of the Dioscur1:wishes to regards this as a transformation of a pagan worship of Edessa but the point is at best problematical. The story itself runs briefly as follows: At the division of the Apostles, India fell to the lot of Thomas, but he declared his in-ability to go, whereupon his Master Jesus appeared in a supernatural way to Abban, the envoy of Gundafor, an Indian king, and sold Thomas to him to be his slave and serve Gundafor as a car-pender. Then Abban and Thomas sailed away until they came to Andrapolis, where they landed and attended the marriage feast of the ruler’s daughter. Strange occurences followed and Christ under the appearence of Thomas exhorted the bride to remain a Virgin. Coming to India Thomas undertook to build a palace for Gundafor, but spend the money entrusted to him on the poor. Gundafor imprisoned him; but the Apostle escaped miraculously and Gundafor was converted. Going about the country to preach, Thomas met with strange adventures from dragons and wild asses. Then he came to the city of King Misdai (Syriac Mazdai), where he converted Tertia the wife of Misdai and Vazan his son. After this he was condemed to death, led out of city to a hill, and pierced through with spears by four soldiers. He was buried in the tomb of the ancient kings but his remains were afterwards removed to the West.

Now it is certainly a remarkable fact that about the year A.D. 46 a king was reigning over that part of Asia south of Himalayas now represented by Afghanistan, Baluchistan, the Punjab, and Sind, who bore the name Gondophernes or Guduphara. This we know both from the discov-ery of coins, some of the Parthian type with Greek legends, others of the Indian types with the legends in an Indian dialect in Kharoshthi characters. Despite sundry minor variations the iden-tity of the name with the Gundafor of the “Acta Thomae” is unmistakable and is hardly disputed. Further we have the evidence of the Takht-i-Bahi inscription, which is dated and which the best specialists accept as establishing the King Gunduphara probably began to reign about A.D. 20 and was still reigning in 46. Again there are excellent reasons for believing that Misdai or Maz-dai may well be transformation of a Hindu name made on the Iranian soil. In this case it will probably represent a certain King Vasudeva of Mathura, a successor of Kanishka. No doubt it can be urged that the Gnostic romancer who wrote the “Acta Thomae” may have adopted a few historical Indian names to lend verisimilitude to his fabrication, but as Mr. Fleet urges in his se-verely critical paper “the names put forward here in connection with St.Thomas are distinctly not such as have lived in Indian story and tradition” (Joul. of R. Asiatic Soc.1905, p.235).

On the other hand, though the tradition that St. Thomas preached in “India” was widely spread in both East and West and is to be found in such writers as Ephraem Syrus, Ambrose, Paulinus, Jerome, and, later Gregory of Tours and others, still it is difficult to discover any ade-quate support for the long-accepted belief that St. Thomas pushed his missionary journeys as far south as Mylapore, not far from Madras, and there suffered martyrdom. In that region is still to be found a granite bas-relief cross with a Pahlavi (ancient Persian) inscription dating from the seventh century, and the tradition that it was here that St. Thomas laid down his life is locally very strong. Certain it is also that on the Malabar or west coast of southern India a body of Chris-tians still exists using a form of Syriac for its liturgical language. Whether this Church dates from the time of St. Thomas the Apostle (there was a Syro-Chaldean bishop John “from India and Persia” who assisted at the Council of Nicea in 325) or whether the Gospel was first preached there in 345 owing to the Persian persecution under Shapur (or Sapor), or whether the Syrian missionaries who accompanied a certain Thomas Cana penetrated to the Malabar coast about the year 745 seems difficult to determine. We know only that in the sixth century Cosmas Indicopleustes speaks of the existence of Christians at Male (?Malabar) under a bishop who had been consecrated in Persia. King Alfred the Great is stated in the “Anglo-Saxon Chronicle” to have sent an expedition to establish relations with these Christians of the Far East. On the other hand the reputed relics of St. Thomas were certainly at Edessa in the fourth century, and there they remained until they were translated to Chios in 1258 and towards to Ortona. The improbable suggestion that St. Thomas preached in America (American Eccles. Rev. 1899, pp.1-18) is based upon a misunderstanding of the text of the Acts of Apostles (1:8; cf. Berchet “Fonte italiane per la storia della scoperta del Nuovo Mondo,” 2:236, and 1:44).

Besides the “Acta Thomae” of which a different and notably shorter redaction exists in Ethiopic and Latin, we have an abbreviated form of a so-called “Gospel of Thomas” originally Gnostic, as we know it now merely a fantastical history of the childhood of Jesus, without any notably heretical colouring. There is also a “Revelatio Thomae,” condemned as apocryphal in the Degree of Pope Gelasius, which has recently been recovered from various sources in a fragmen-tary condition.