Thoughts and how to confront them (2)

Thoughts and how to confront them (2) 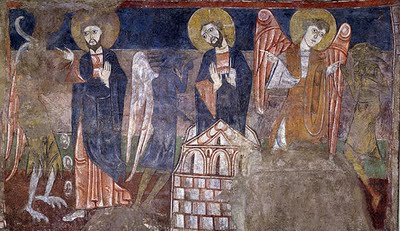 3. The journey towards the world of sin.

Externally, the act of sin may appear to be a simple fact, such as a car accident or some other incident. However, in order to commit this act, much other successive instrumentation must have taken place. For example, in order for a murder to take place, there must have, beforehand, occurred thousands of reflections and plans in the human mind. The human mind, in order to come to the point of committing the act of murder, had first become an entire base of demonic thoughts. This is what happens with the commitment of any act of sin. And it all started because of one simple thought…

Let us proceed, however, to see what happens, after the assault of one simple thought.

We are not held liable for a simple thought or image which passes through our mind, nor is it difficult for us to confront it. However, from the moment that we open the door to welcome in this thought and commence to ponder it, it is then that the thought takes its position within us and become a prevailing thought.

The thought is the main reason «for the journey towards the act of sin». This journey is for us the same as the path and the evolution of disease in the human body. Just as for someone to go to a hospital a various series of events must have previously taken place in the human organism, it is the same for someone to reach the point of having committed the act of sin. A great war must have previously taken place. It is similar to the birth of a child. A complete series of events first take place: from the conception up to the lengthy pregnancy. It is exactly so in the case of sin. The conception of the thoughts, their gestation period and their birth.

St. Nikodimus the Athonite, believes that the thought is the beginning, or the root out of which sprouts the trunk, the branches and the complete tree of sin!

The damage begins from the instance of the first thought, and, in continuation, it intensifies. When someone throws a pebble into a well, the waves caused by its tossing create one small ripple in the beginning. The small ripple creates a larger ripple that goes on to create a larger one, up until the wave reaches the walls of the well.

It is exactly so with sin. Before the sin is committed, a succession of mechanisms and events previously take place and each one follows the other in cosecutive order.

We are able to perceive three stages in the journey towards the world of sin in this order:

a. the assault, b. the consent or approval, and c. the captivity or imprisonment.

How does this mechanism work? It works in this way: Some cunning thought such as conceit, vainglory, stinginess, gluttony, condemnation, etc., enters the person’s mind. Temptation works though the use of the imagination and its fantasies. It presents the situation as enticing as possible. In this way, its presentation becomes stronger and more attractive.

Up to this point, man is not liable for the thought. The first stage is an assault, an attack from the enemy, or more simply put, the enemy’s knocking on that person’s door! This situation is normal… physiological. It is not possible for a human to exist without having received an assault. St. Ephraim, the Syrian, says that just as it is normal for someone to find weeds and flowers growing together in a garden or just as the islands are pounded by waves all around their coastline, so it is for man. It is most certain that he will come into contact with the attacks of evil thoughts.

From this point on comes the stage of sinning. The commencement of the battle is the assault. If man tosses it out of his mind, without deliberating on it, he then saves himself and liberates himself from the wretched consequences which would follow. If, however, he accepts the discourse with the cunning thought, he opens the door to this impure thought which previously was simply a «knocking on his door». He creates a friendship with it and then comes to the point of approval of the sin. This is the second stage of the execution of the sin.

The person rehearses the sin in the inaccessible depths of his soul and imagines himself having an active part in sinning. He condemns, blasphemes, fornicates, commits adultery, murders, and carries out countless crimes and commits whatever the human mind is capable of imagining. Later, nothing else remains but the third stage, which is the actual execution of the act of sin by the person whose mind has become a hostage of the thought. This person no longer controls the thought, but is imprisoned by it.

Thus, the thought, which began with a simple knocking of the door (the assault), caused the opening of that door (the consent). In Conclusion, the person was unable to control and dismiss the thought, and he eventually committed the act of sin. This is the path towards sin, which begins with one single thought.

5. Passions are the source of sinful thoughts.

Up to the point of a man’s death and as long as his soul remains in his body, it is impossible for him not to have evil thoughts.

The main reason for the existence of these evil thoughts is the war which the devil wages against us. Most thoughts are of diabolical origin. It is the devil’s aim to cast man into sinning, either through the use of evil thoughts or through the performance of the act itself. St. Makarios, the Egyptian, states that spiritual adultery is the consent one gives to cunning thoughts. This is why he says: «a person is obliged to maintain his soul pure and clean, since it is the bride of Christ».

In most instances, evil thoughts resemble themselves to «a river current», in front of which a man begins to panic. That is why the demons first bout with us by use of diabolical thoughts and then follow with materialistic things. If one yields to them, they will then slowly push that person into sinning by execution of the act of sin.

St. John of Damascus tells us that the dominating reasons for evil are eight, the following: 1. Gluttony, 2. Fornication, 3. Stinginess, 4. Rage, 5. Grief, 6. Indifference, 7. Vainglory and 8. Pride and haughtiness.

Someone else may tell us that the most basic passion in a human, from which all the passions originate, is selfishness and conceit. Selfishness is the illogical self-love and care given to our own self. This is also the passion of today’s human being. It is from selfishness that the three dominating thoughts originate: 1. Gluttony, 2. Vainglory, and 3. Haughtiness. From these three vices arise all evil thoughts.

All that has been stated previously refer to cunning thoughts. However, in addition to those, there exist the good-hearted thoughts and the idle and unprofitable, or human thoughts. The good-hearted arise from God. How shall we then discern them from those which are cunning and impure?

7. Thoughts are the beginning of the war.

Generally speaking, as previously mentioned, the thoughts are the beginning of the war which the devil wages against us. The war begins with assault of cunning thoughts and later proceeds to the consent and approval of the sin.

This is the path and the development of thoughts which predominantly arise from the devil and from man.

Let us examine, then, how man is attacked by thoughts, or which methods the demons use in order to overtake us through the use of thoughts.

The craftiness of the demons, which desire to sow within us countless impure thoughts, is indescribable. The devil will even take advantage of the most unimportant incident that has taken place in our lives, or the most improbable and unlikely situation to contaminate us.

To begin with, before they cast us into sin, they implant in us the thought that God is a philanthropist. After the act of sin, however, they bombard us with the thought that God is abrupt, rude and harsh. They do this in order to bring us to the point of despair. «Before the fall, they call God a philanthropist, whereas after the fall abrupt and harsh».