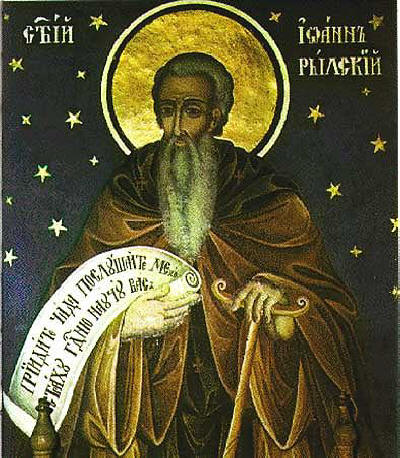 He was born in the year 876 in the village of Skrino in Sardica Province (which today is Sofia). Orphaned at an early age, the boy hired himself out to strangers as a shepherd. It happened that a rich man beat him because a cow and its calf had gotten lost. For a long time, the little boy wept and prayed that God help him. At the time he located the cow and the calf, the water level of the Sturma River had risen sharply. The young shepherd prayed, made the sign of the cross over his outer clothing, laid it on the surface of the water, picked up the calf and carried it across, as if on dry land, to the other shore, where the cow was waiting for them. The rich man, who had been hiding in the woods, was terrified upon witnessing this miracle; giving the boy a generous reward, he released him from service.

The boy gave away his fortune, and went off to his native village. When and where he received monastic tonsure is unknown. At first he took up his struggle on a high, barren hill, where he his only sustenance was drawn from plants that grew in the wilderness. His hut was made of brushwood. One night soon after he settled there, he was attacked by bandits, was beaten, and was driven away. He then made his dwelling in a deep cave.

Soon thereafter, his nephew, St. Luke, moved in as well. The place was so bereft of people that when Luke appeared, St. John at first thought that it was a machination of the demons. On realizing that the youth was in fact seeking salvation of his soul, he lovingly accepted him. However, they were not to live together for very long. St. John’s brother located the spiritual strugglers and forcibly took away his son. Along the way home, the youth was bitten by a snake and died. The brother repented of what he had done, and asked forgiveness of the Venerable One. The desert dweller would often visit the righteous youth’s grave; it was his favorite place to rest.

The Venerable One spent eleven years in the cave in the wilderness. After that, he moved to the wilderness of Rila, where he took up residence in the hollow of a tree. He fasted a great deal, prayed, and constantly wept; he ate only grass. Taking note of the Saint’s patient suffering, God had bean plants spring up to provide him with sustenance for a long time. It was the appearance of those beans that caused people to learn of his spiritual struggles: It happened that a flock of sheep was startled by something, and ran off along the mountain ridges. They stopped at the place where the Saint lived. The shepherds following after their flock were stunned to see a hermit tenderly feeding the sheep. He said to them, “You have come here hungry. Pluck some of my beans for yourselves, and eat.” All ate until they were full. One of them hid away a lot of beans for later. Along the way home, he offered them to his companions. However, not a single bean was to be found in the stolen bean pods. In repentance, the shepherds contritely returned to the Elder. He forgave them, and with a smile said, “You see, children, God provided those beans for sustenance in the wilderness.”

From that time on, people would bring to the Venerable One those who were sick or possessed by evil spirits, and he would heal them through prayer. To avoid fame, the spiritual struggler left his beloved tree-hollow and settled onto a high and almost inaccessible cliff, where he spent seven years under the open sky. Word of the great desert-dweller reached King Peter of Bulgaria (927-969), who wanted to meet him. However, St. John wrote him a letter, humbly declining the meeting.

Later, the desert-dweller took under his care monastics who established a monastery and a church in the cave where St. John had previously lived. He wisely shepherded his flock until his repose, at the age of 69, on August 18, 946. Five years before his death, he wrote his Testament to Disciples, one of the finest compositions in the body of ancient Bulgarian literature. The spiritual struggler’s life and the signs of God’s mercy shown as the result of his prayers were the best possible testimony regarding the Christian Faith in the newly-Baptized Bulgarian land.

In the troubled time of war between Bulgaria and Byzantium – during the reign of King Samuel (976-1014), St. John of Rila appeared to his disciples, and directed that they move his relics to Sardica (Sofia), where Patriarch Damian of Bulgaria (927-972) had taken refuge. It is thought that the translation of the relics took place in the year 980. Some time later, St. John of Rila’s right hand was taken to Rus’, after it first was taken to Rila, where the Church of Venerable St. John of Rila, and a side-chapel of the Holy Martyrs Flor and Laurus was erected. Those Martyrs are celebrated on August 18, the day of St. John’s repose. Since antiquity, Russian people have known of and loved St. John of Rila. It was in Russian source materials (the 12th Century Mazurinsky Chronicle) that the date of the Venerable Saint’s repose was recorded. In 1183, among the treasures of Serdets seized by King Bela II of Hungary (1174-1196) during his campaign against the Greeks was the reliquary containing the relics of St. John. They were taken to Esztergom. In 1187, after richly decorating the reliquary, he returned the Holy Relics with great solemnity and honor. On October 19, 1238, St. John’s relics were translated with great solemnity to the new capital, Veliko Tarnovo, and were installed in a church dedicated to the Saint. On July 1, 1469, the Holy Relics of St. John of Rila were returned to the Rila Monastery, where they remain today, and where they afford grace-filled help to all of the Faithful.