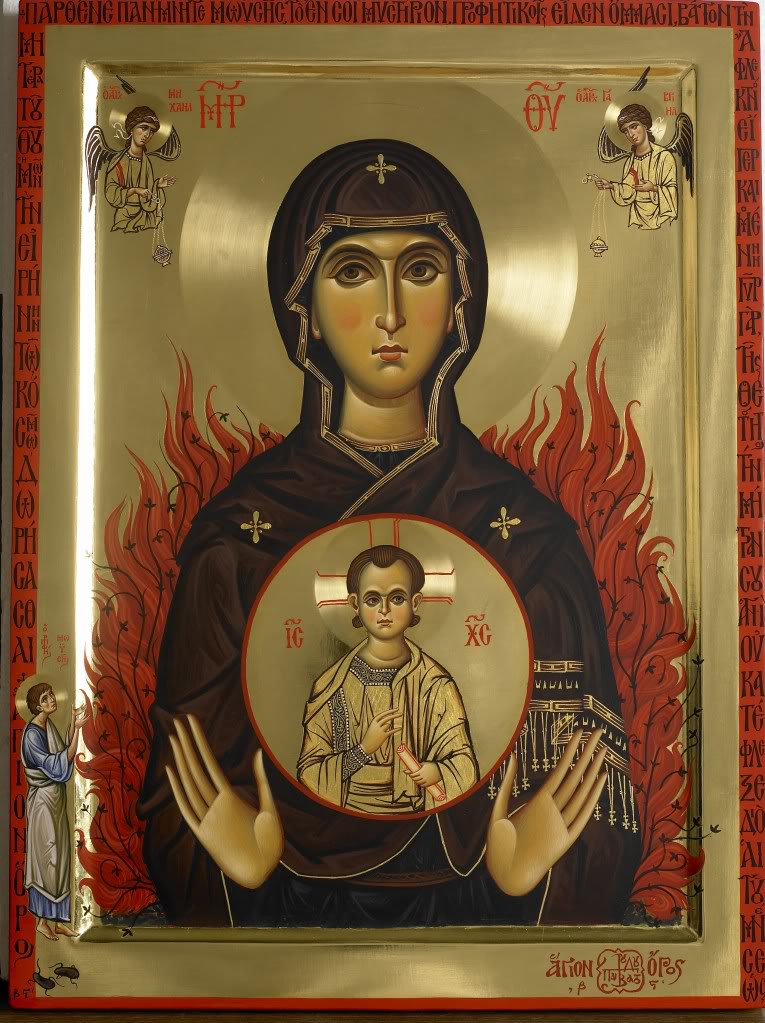 Theotokos the Burning Bush. An icon from the workshop of the Holy and Great Monastery of Vatopedi.

The Most-Holy Theotokos and Ever-Virgin Mary.

In the theology and piety of the Orthodox Church, a special place of honor is given to the Mother of God — the Most-Holy Theotokos and Ever-Virgin Mary, who is reverenced by the Orthodox as being “more honorable than the Cherubim and more glorious, beyond compare, than the Seraphim.” As Orthodox we style her as the most exalted among God’s creatures; but we do not regard her as some sort of goddess, the 4th Person of the Trinity, as some accuse us; nor do we render her the worship due God alone. Just as with the Holy Icons, the veneration due Mary is expressed in quite different words in the Greek writings of the Fathers than that due God.

At many of the Divine Services, the Deacon exclaims: “Commemorating our Most-Holy, Most-Pure, Most-Blessed and Glorious Lady Theotokos and Ever-Virgin Mary with all the Saints….” And here we can see three basic truths expressed concerning her.

The Virgin Mary is honored because she is Theotokos — the Mother of God — not of His divinity, but of His humanity, yet of God in that Jesus Christ was, in the theology of the Church, both God and Man, at one and the same time, in the Incarnation. Therefore, the honor given Mary is due to her relationship to Christ. And this honor, rather than taking away from that due God, makes us more aware of God’s majesty; for it is precisely on account of the Son (Him-self God) that she is venerated. Of times, when men refuse to honor Mary, it is because they do not believe in the cause of her veneration — the Incarnation of the Second Person of the Trinity.

We also speak of the Theotokos as being Ever-Virgin, which was officially proclaimed at the 5th Ecumenical Council (Constantinople — 553; the dogma concerning Mary as being Theo-tokos was proclaimed in 431 at the 3rd Ecumenical Council in Ephesus). This notion does not actually contradict Holy Scripture, as some would think. And His mother and His brothers came; and standing outside they sent to Him and called Him (Mark 3:31). Here the use of the word brothers in the original Greek can mean half-brother, cousin, or near relative, in addition to brothers in the strict sense. The Orthodox Church has always seen brothers here as referring to His half-brothers.

If Mary is honored as Theotokos, so too, she is honored because she is Panagia — All-Holy. She is the supreme example of the cooperation between God and Man; for God, Who al-ways respects human freedom, did not become incarnate without her free consent which, as Holy Scripture tells us, was freely given: Behold, I am the handmaid of the Lord; let it be to me ac-cording to your word (Luke 1:38). Thus Mary is seen by the Church as the New Eve (as Christ is the New Adam) whose perfect obedience contrasted the disobedience of the First Mother, Eve, in Paradise. As St. Irenaeus says, “the knot of Eve’s disobedience was loosed through the obedience of Mary; for what Eve, a virgin, bound by her unbelief, that Mary, a virgin, unloosed by her faith” [Against the Heresies, III, xxii, 4],

As All-Holy and Most-Pure, Mary was free from actual sin, but, in the opinion of most Orthodox theologians, although not dogmatized by the Church, she did fall under the curse of Original Sin as does all mankind. For this reason — by virtue of her solidarity with all humanity — the Theotokos died a bodily death. Yet, in her case, the resurrection of the body had been an-ticipated; and she was assumed body and soul into Heaven; and her tomb was found empty — an event celebrated in the Feast of the Falling-Asleep (or Dormition) of the Most-Holy Theotokos (Aug. 15). Thus, as the hymns of that Feast proclaim, she “has passed from earth to heaven,” beyond death and judgment, living already in “the age to come.” She enjoys now the same bodily glory all of us hope to share one day.

Whereas the Church has officially proclaimed as dogmas the doctrines concerning the Trinity and the Incarnation, the glorification of the Mother of God belongs to the Inner Tradition of the Church. As the noted Orthodox theologian, Vladimir Lossky writes: “It is hard to speak and not less hard to think about the mysteries which the Church keeps in the hidden depths of her inner consciousness…. The Mother of God was never a theme of the public preaching of the Apostles; while Christ was preached on the housetops, and proclaimed for all to know in an in-itiatory teaching addressed to the whole world, the mystery of His Mother was revealed only to those who were within the Church…. It is not so much an object of faith as a foundation of our hope, a fruit of faith, ripened in Tradition. Let us therefore keep silence, and let us not try to dogmatize about the supreme glory of the Mother of God” [“Panagia,” in The Mother of God, ed. E.L. Mascall, p.35].

Appellations of the Theotokos.

Just as Aaron’s Rod sprouted miraculously in the Old Testament, so too, the Theotokos has budded forth the Flower of Immortality, Christ our God (Num. 17:1-11).

In the Old Testament Tabernacle, there were found in the Sanctuary golden candlesticks. The Theotokos is the Candlestick which held that Light that illumines the world (Ex. 25:31-40).

Just as the censer holds a burning coal, so too, the Theotokos held the Living Coal. In the Apocalypse, there stands an Angel before the Throne of God, swinging a censer, representing the prayers of the Saints rising up to God. This is also seen as a symbol of the Theotokos, for it is her prayers that find special favor before her Son.

In the Exodus, the Israelites were led out of Egypt by a Cloud of Light, symbolizing the presence of God in their midst. So too, the Theotokos is a Cloud, bearing God within.

In a dream Jacob saw a ladder ascending to Heaven, with Angels” ascending and des-cending on it. The Theotokos is a Ladder, stretching from earth to Heaven, for on It God des-cended to man, having become incarnate.

Mountain (from which a Stone was cut not by hand of man).

The Prophet Daniel saw a mountain, from which was cut a stone, not by the hand of man (Dan. 2:34, 45). This is a reference to the miraculous Virgin Birth which was accomplished without the hand of man.

The Theotokos was the Palace within which the King — Christ our God — dwelt.

In the Nativity Service, the Lord is referred to as the “Rod from the Stem of Jesse” (Is. 11:1), indicating His lineage from David, which was fulfilled through the Theotokos, who was a scion (or stem) of the line of David, the son of Jesse.

The Prophet Ezekiel speaks of the Temple whose East gate remains sealed, through which only the Lord, the God of Israel, has entered. This clearly prophesies the Virgin Birth of the Theotokos (Ez. 44:1-2).

The Theotokos is the Throne upon which Christ, the King of All, rested.

In the Old Testament, the Ark of the Covenant contained within itself a golden urn filled with the heavenly manna. The Theotokos is the Urn which contained Christ, the Divine Manna (Heb. 9:1-7).

The Theotokos is the Vine which bore the Ripe Cluster (of Grapes), Christ our Lord.