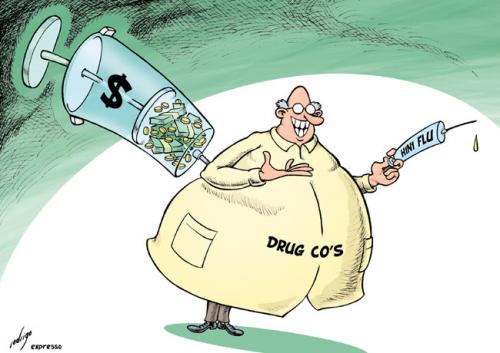 Media in Sweden is having a tough time maintaining the propaganda as more and more people question the reasons for the mass vaccination. Now, authorities say that if not «80% of the population takes the shot, we risk 100 deaths from the swine flu». Most Swedes know that a normal flu season see several thousand dead from complications from the seasonal flu so the proportions of the propaganda coming from media and the government has caused a growing revolt against the massive attempts to scare people to take the poisonous injection.

We have earlier reported on the first death, the second death (also here), the third death and the fourth death in Sweden from the poisonous Pandemrix vaccin shot.

Today, Svenska Dagbladet reports that over 350 cases of side effects from the Pandemrix «swine flu» shot, has been recorded so far. It has also become clear that this shot contains the most deadly mix of substances of all the known vaccines manufactured against the so called «swine flu» H1N1 influenza. The official number of deaths from the «swine flu» vaccine is now five. And that is only those who have strong immediate reactons, the long term effects are usually never even investigated. If you would die from the shot two weeks after you took it, your death would not be considered to have anything to do with the vaccination. Severe health problems years after will of course be very hard to link to the poisonous injection. Even if these five official cases died within days, the official story is of course as expected: «none of these deaths has been confirmed to be linked to the vaccine».

In Aftonbladet, Jan Liliemark from The Swedish Institute for Infectious Disease Control (SMI) says: «- Nothing points to a connection. There will be more deaths. We are looking for a pattern, if the cases have something in common. We have so far not found any clear connections between them yet.» Officially 198 cases of confirmed «swine flu» exist in Sweden today among a population of over 9 million. How these cases have been tested and determined is not clear.

As always with statistics like this, historically we know that very few of all real side effects are actually reported. Optimistically, up to ten per cent would be reported. It is also highly likely that deaths are being kept secret by the authorities so that the massive and hugely expensive vaccination program will not come to a complete stop. Too many have put their job, reputation and title at stake for the truth to be reported and published.

So far, three people have been reported dead from complications from getting the H1N1 virus. Five dead from the flu shot before the real vaccination campaign has even started should be an indication to question the vaccine and the strategy chosen but the authorities have so much prestige invested that it is unlikely it will ever happen – no matter how many will die from the poisonous injections.

The Swedish public are being kept in the dark about the most simple facts about the vaccinations. The questionable protection against the virus will only be for this present strain – any new mutations would immediately require a new vaccine for that strain. The new second wave of the new mutation is exactly what authorities warn about and use as an argument to take the poisonous injection.

Authorities are running out of arguments and completely idiotic arguments have been published the last week in Sweden. «There is less mercury in the shot than you get from eating mercury contaminated fish», «You might get sick from the vaccine but you should take that risk to ´save» someone who could die from getting the H1N1 infection from you», «It would be like killing someone to not take the shot out of solidarity» and «Mercury is not dangerous and also squalene is not dangerous, there is nothing called the Gulf War Syndrome and if there is, it has nothing to do with squalene because there was no squalene in the vaccines the US troops got», «German politicians will not get a different flu shot than the rest of the German population».

The number of flat out lies are so many, it is hard to keep track of them all.

The chief of The Swedish Institute for Infectious Disease Control (SMI), Annika Linde, says in the article: «- The Vaccine is principally natural to the body. The mercury was necessary but the amounts are very small. There are many who have been making statements without qualified knowledge. It is of course good that this type of matter is debated but some of the reporting is rather devastating for the possibility to vaccinate the whole population.» You are welcome Mrs Linde.

The official line in Sweden is bordering to madness and the biggest medical scandal in the history of the nation has just started.