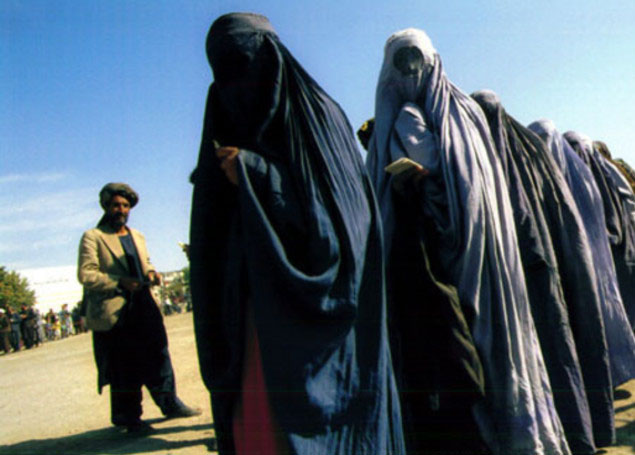 The man she married is French, her four children were born in France and she speaks French with only a trace of her native Arabic tongue. Faiza Silmi contends her clothes – a head-to-toe robe and filmy tissue covering her face – are the reason France has denied her citizenship in her adopted land.

The 32-year-old Moroccan may soon be facing an even fiercer blow. A top French lawmaker submitted a draft law this week that would ban such Islamic dress anywhere in public, a measure that would set a European precedent and trap thousands of women between their religious convictions and the law of the land.

«They say I’m too attached to my religion,» Silmi told The Associated Press at an empty restaurant near her home southwest of Paris, her large eyes peering from a slit in her veil. «Lots of Christians live in Morocco and we don’t make them wear scarves.»

Unlike Muslim headscarves, full-body, face-covering robes are a rare sight in the streets of France, home to an estimated 5 million Muslims, the largest such population in western Europe. France’s main Muslim leaders have declared that Islam does not require women to cover their faces with niqabs or burqas.

In a country whose national emblem is Marianne, a bare-chested woman, there is deepening concern over the all-encompassing garb, often black or brown and worn with gloves, attire typical in Saudi Arabia and the Gulf states. Here, it is widely viewed as a gateway to radical Islam, an attack on gender equality and other French values, and a gnawing away at the nation’s secular foundation.

President Nicolas Sarkozy opened the door to a possible ban in June, telling a parliament session in Versailles that such dress «is not welcome» in France. A parliamentary panel set to work in July on a six-month mission gathering information on the garments.

On Tuesday, the head of Sarkozy’s conservative UMP party in parliament’s lower house, Jean-Francois Cope, jumped the gun before the panel’s report was finished, and filed draft legislation on a ban. «No one may, in spaces open to the public and on public streets, wear a garment or an accessory that has the effect of hiding the face,» the draft text reads.

The document cites public security concerns, thus includes all face-covering clothes, in a bid to head off challenges from those who might claim such a law would violate constitutional rules on individual rights – a major concern along with how such a law would be enforced. It foresees fines for those who break the law.

The initiative, unlikely to go to debate before spring, would be the second time France targets Muslim dress. A 2004 law born in acrimony bans Muslim headscarves and other «ostentatious» religious symbols in the classrooms of French public schools. Sarkozy’s party dominates parliament and the president reiterated Wednesday his wish for a law on full veils, though it’s too early to say whether it will pass.

Europe’s growing Muslim population has bred tension across the continent. Wariness is pervasive since deadly attacks in Madrid in 2004 and in London in 2005 by Islamic radicals living in Europe. And some non-Muslims sense a threat by a foreign culture to their way of life. It took only four minarets on Switzerland’s 200 mosques to push the Swiss to vote «no» to minarets in a November referendum.

However, France, which wants an Islam tailored to the West, would be the only western European country to target the all-enveloping robes and niqabs, the cloth hiding the lower face. «We’re going to become the laughing stock of democracies» should France ban the clothing, said Raphael Liogier, a sociology professor who runs the Observatory of the Religious in Aix-en-Provence.

He is among critics who say a ban would be a violation of basic rights and «transgression of the fundamental principles of our republic.»

Muslim leaders of all tendencies have warned that a ban risks stigmatizing all Muslims, and anti-terrorism judge Marc Trevidic told Sunday’s Journal du Dimanche that a ban «will maybe push impulsive people to want to commit attacks.»

However, Andre Gerin, who heads the parliamentary panel, says the full-body veil is an «attempt to instrumentalize Islam for political ends» via a «fundamentalist and barbaric ideology» that oppresses women.

Gerin, a communist who served for years as mayor of Venissieux, a suburb of Lyon known as a haunt for Muslim fundamentalists, insists the phenomenon is growing.

But at Friday prayers recently at a mosque northwest of Paris in Argenteuil, considered a bastion for Salafists who adopt a literal reading of the Quran, only a handful of fully veiled women were seen. Some expressed fear of a ban.

«We won’t be able to leave the house,» said Oumeima Naceri, a 19-year-old convert draped in black garments, including a filmy «sitar» veil covering even her eyes. «That frightens us enormously … It’s like asking us to go naked.»

Official statistics on burqas are impossible to gather. A 2004 report by a French intelligence service put the number of women in full veils at some 4,000. More than a quarter had converted to Islam, some experts estimate.

Silmi, the Moroccan woman seeking French citizenship, began veiling herself completely only after coming to France in 2000. She said she and her husband Karim, who was born in Paris to Moroccan parents and has French citizenship, discovered a deepening of their faith through books and cassette recordings not available in Morocco. She insists her partner did not impose the veil on her – and says she is in the process of divorcing him after 10 years of marriage.

Silmi was refused French citizenship for what authorities said was her failure to assimilate into French culture. Assimilation is most often defined by a candidate’s ability to speak French, though not in her case.

In each of three reports following interviews with Silmi, officials described her clothing. Her pro bono lawyer, Ronald Sokol, an American living in France, said that is what kept her from becoming French.

Silmi lost an appeal to the Council of State, in June 2008, which ruled that she «adopted a radical religious practice incompatible with essential values of the French community.» She has now turned to the European Court of Human Rights.

«A woman must cover herself. It’s written in the Quran,» Silmi told AP.

Lawmaker Daniele Hoffman-Rispal, member of the parliamentary panel, said she sees women clad in all-encompassing robes on market days in her district in eastern Paris and is bothered that «they have a right to look at me … see my eyes, my smile» but she cannot look at them.

But if a ban were passed, «Will we hire dozens of police to put them on street corners?» she asks. She worries, too, about women who could become shut-ins to avoid getting caught.

As for Silmi, she said she will consult a Muslim sage on the Internet about what to do should a legal ban be passed.

«If he tells me not to remove my veil, I prefer to return to Morocco» rather than break French law, she said.