Mother Gavrilia: “A Holocaust to His Love”

Mother Gavrilia: “A Holocaust to His Love” 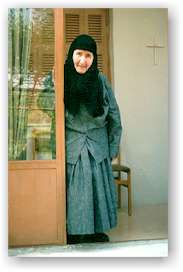 The roster of 20th-century saints includes some who lived very public lives, such as Russia’s Royal Martyrs, and not a few who strove to live “hid with Christ in God.” Saint Silouan of Mount Athos might have passed without a worldly trace if God had not sent Archimandrite Sophrony to record his life for our benefit.

Likewise, Mother Gavrilia (+1992), an undoubted Saint (not yet officially glorified) of the Church, lived only to love and serve God in humility — “not to exist” as she herself said. By God’s providence her spiritual daughter and namesake, nun Gavrilia, has assembled for us a radiant biography and collection of the Gerondissa’s sayings, “Ascetic of Love”, which may prove to be one of the great spiritual testaments of our time.

Avrilia Papayanni was born in 1897 to a wealthy Greek family in Constantinople, which remained her home until 1923, when the family was deported to Thessalonika as part of the infamous “exchange of populations.” Avrilia entered the University of Thessalonika as the second woman ever to enroll in a Greek university. Though the path to worldly distinction seemed open to this intelligent, unconventional and privileged young woman, she chose another way: in 1932, responding to a command (as she later described it) of Christ Himself, she moved to Athens to live alone and work in nursing homes. She then traveled to England (arriving with one pound to her name) and studied physiotherapy in London. In 1947 she opened her own physiotherapy practice in Athens. Already her nearly-unique path of combined service and hesychia was beginning to emerge: though she had many wealthy clients, she donated her services to the poor, said the Jesus Prayer constantly during her treatment sessions, and healed many by her prayers, often using her medical procedures as “cover” for her wonderworking intercession.

In 1954 her beloved mother died. The moment was a pivot in her life: she wrote that her mother’s death “severed the last tie that had kept me bound to normal, material life on this Earth. Suddenly I was dead… I was dead to the world.” She spent that entire night awake, her room filled with a blinding radiance coming from the icon of Christ. Within a year she had closed her therapy practice, given all her money and belongings to the poor, resolved to live in absolute poverty, and (now aged almost sixty) headed for India with no plan, but a strong sense that Christ had called her there. (In this time of heightened enmity between Islam and the West, it seems a miracle in itself that only fifty years ago she traveled alone, by bus, from Jordan through Iraq and Iran, to India — and that at every stop she was invited to enter the local mosque to “pray to her God.”)

Avrilia arrived in India with one dress and a Bible (her only reading at that time) and stayed for five years, at first giving free physiotherapy to lepers and the poor at several clinics and ashrams. She worked and mingled freely with Hindu gurus and protestant missionaries, making no distinctions in her loving openness to all. A casual reader of her biography might fear that she was careless or syncretistic in her Orthodox faith, but a closer reading will put any such concerns to rest. Throughout her years away from Orthodox churches or contacts, she kept the fasts strictly and never prayed with non-Orthodox, Christian or not. (When invited, she would answer “I do not pray aloud and never in company. I pray alone or at Church… but do come and tell me your news over a nice cup of tea.”) The only example that I have found of her ever speaking severely to anyone came when, on a speaking tour, a protestant made a disparaging remark about the most holy Theotokos. Mother Gavrilia immediately took aside the person in charge and said “Brother, I am sorry but I must tell you that as of tomorrow I will no longer be with you… I cannot hear such words for Her, Whom I love most after our Lord Jesus Christ.” Suitable apologies were forthcoming, and the tour continued.

Toward the end of her time in India, the same Voice that had called her to give her life to the poor led her to spend eleven months in eremitic solitude in the Himalayas. During this time she received the call to monastic life. In 1959 she entered the Monastery of St. Lazarus in Bethany, where she was tonsured a nun after a three-year novitiate, receiving the name Gavrilia.

The next twenty years were a heady mix of monastic quietude alternating with speaking tours, three years of missionary service in East Africa, and another three years in India working with Fr. Lazarus Moore’s Orthodox community. Archimandrite Sophrony asked her to become abbess of his women’s monastery in England, but she declined — one of the few times that she refused any of the calls to service that repeatedly drew her away from her increasingly cherished silence and solitude.

In 1979 she was given free use of an apartment in Athens that over the next ten years became known to her disciples as the “House of Angels.” Here she would spend half of each day in prayer, receiving no one, the other half in counseling and healing a stream of visitors. In her last few years she moved to a hermitage in Aegina, then to Leros, where she received the Great Schema in 1991 and reposed in peace the following year.

Her biography includes (but does not emphasize) a startling series of miracles: a sudden, complete healing from the last stages of Hodgkin’s disease, regeneration of a lens after cataract surgery, out-of-body travel to Mt Sinai, to name a few — but, as one of her spiritual children told me, the most significant miracle for those who knew her was her own presence and her all-pervading love for all. As Nun Gavrilia wrote, “Mother Gavrilia’s entire life, which was a hymn to the Lord, became thanks to Him, a burnt offering, a holocaust to His love.”

The sweetness and openness of Mother Gavrilia’s character was fed by a quiet but constant askesis and awareness of the rigor of Christ’s commandments. (I was brought up short by her statement that the Christian religion “is for the very few.” By the standards to which she held herself, I am very far from being one of those few.) Even as she extended herself without reserve to serve others, she felt the relative smallness of her service. While living at the New Jerusalem Monastery in Greece (1967, aged 69) she offered free physiotherapy to residents of the Russian Old People’s home. She wrote “You can imagine my joy at being here and treating these aged people… I joke and laugh and see their mournful faces change. What a pity all is so temporary… Unless Joy comes from within — that is from its Source — it does not last. As soon as I leave, it is as if I had never shared His Joy with them. Here I understand the words of Christ: My joy I give unto you: not as the world giveth…”

Mother Gavrilia’s life obliterated the inane distinctions that we so often make between prayer and service, contemplation and action. She had no theories about the Church, society, the Christian life, or anything else. Her only “program” was to love with the love that proceeds from complete abandonment to Christ, and to act as that love dictated. At one time this might express itself in “social action,” at another time in secluded hesychia. The difference was immaterial because the Source was the same.

One of the most valuable portions of Ascetic of Love is a luminous collection of her sayings. I can find no better way to close than to quote the first and last of these: “Any place may become a place of Resurrection, if the Humility of Christ becomes the way of our life.”