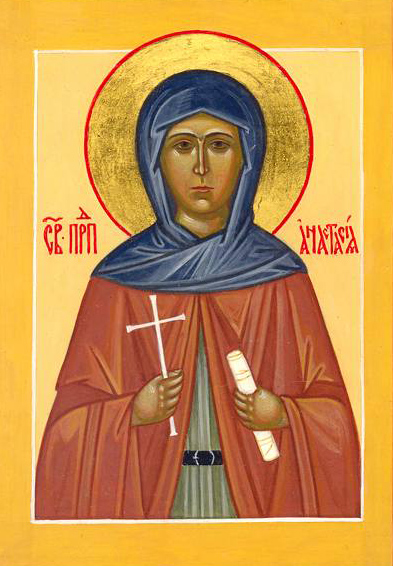 St. Anastasia the Patrician of Alexandria lived in Constantinople and was descended from an aristocratic family. She was an image of virtue and enjoyed the respect of Emperor Justinian. Widowed at a young age, Anastasia decided to leave the world and save her soul. She secretly left Constantinople and went to Alexandria. She founded a small monastery not far from the city, and devoted herself entirely to God.

Several years later, Emperor Justinian was widowed and decided to search for Anastasia and marry her. As soon as she learned of this, St. Anastasia journeyed to a remote skete to ask Abba Daniel for help.

In order to safeguard Anastasia, the Elder dressed her in a man’s monastic garb and called her the eunuch Anastasius. Having settled her in a very remote cave, the Elder gave her a rule of prayer and ordered her never to leave the cave and to receive no one. Only one monk knew of this place. His obedience was to deliver a small portion of bread and a pitcher of water to the cave once a week, leaving it at the entrance. Anastasia dwelt in seclusion for twenty-eight years.

The Lord revealed to Anastasia the day of her entry into the heavenly kingdom. Having learned of her approaching death, she wrote several words for Abba Daniel on a piece of broken pottery and placed it at the entrance to the cave. The Elder appeared and brought everything necessary for her burial. He found Anastasia still alive, and confessed and communed her with the Holy Mysteries. At Abba Daniel’s request, St. Anastasia blessed him and the monk accompanying him. With the words: “Lord, into Thy hands I commend my spirit,” the saint died in peace in 567.

After the grave was prepared, the Elder gave his disciple his outer garment and ordered him to dress the deceased “brother” in it. As he was putting on the rassa, the monk noticed that she was a woman, but he did not say anything. However, when they returned to the monastery after her burial, the disciple asked Abba Daniel whether he knew the “brother” was a woman, and the Elder related to the young monk the life of St. Anastasia. Later, this narrative was written down and received wide acclaim.

The relics of St. Anastasia were transferred to Constantinople in 1200, and placed near the Church of Hagia Sophia.