Some miracles performed by the right hand of Saint John the Baptist (Holy Monastery of Saint Dionysios, Holy Mount Athos)

Some miracles performed by the right hand of Saint John the Baptist (Holy Monastery of Saint Dionysios, Holy Mount Athos) 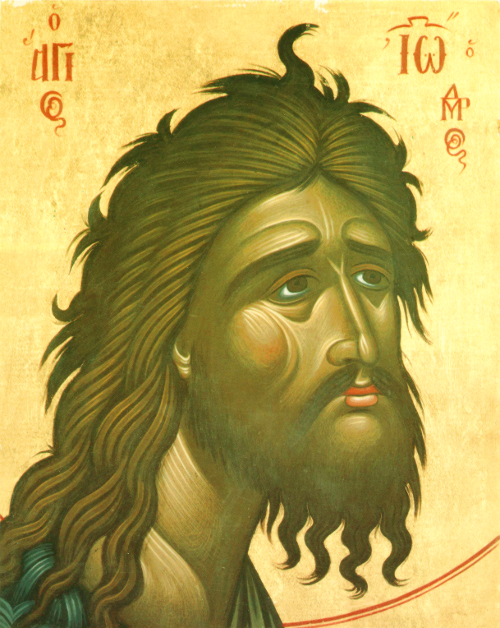 Just as we are referring to the wonders performed by Saint John, The Baptist, in the present times, we are not departing from our purpose if we also refer to some miracles performed in the past, which have so far been unknown to most of our brothers, through which it is brilliantly manifested how he protects and helps the monastery and its monks…

We will omit the totally unexpected and paradoxical appearance of this protection by the Saint, because its detailed description is read during the joint feast on the day of its commemoration, the Fourth Sunday of Lent.

Let’s talk about some events which took place in the island of Poros, and refer to the dangers which those who were at sea have avoided from the day of their departure. In order to avoid talking about these things ourselves, let’s us present the account given by the Abbot Stephanos, who refers to the reasons for this sea voyage and to some historical facts. (These accounts are found in Code 627 of the monastery, 1733-1833).

He writes: “Kassandra has fallen, everyone have been taken captives by the agarinous(Turks) who have even been threatening to capture Ayio Oros. When the monks saw the Turks advancing, they picked up their holy relics and left towards romeiko. I also left among them, with my holy relics. Taking those of the monks who wanted to leave, we deserted the monastery on the 23 of February 1821.  read more…That night, there was a storm and high seas, but nevertheless, were embarked and let the waves take us whenever they wanted. During the night we arrived at Amouliani and moored. All the ships belonging to the kleftes also anchored there, but God did not give them permission to touch us.

We got up in the morning, the weather was better. We sailed towards the monastery again, so that we could take some of the things which we had left behind together with the other seven monks. However, a boat from Psara hunted us down; they fired four shots with their guns but we managed to escape towards the port of Sikia and they couldn’t reach us.

While at sea, we met with a lot of dangerous people, who had the same faith as us, but the Lord freed us from all evil. Finally we reached the island of Poros. There, our Christian brothers helped us, despite the presence of some evil people who wanted at first to harm us. Saint John, however, protected us. One such person, a marauder, who wanted us to hand over some silver to decorate his guns, threatened to visit us during the night and do us a lot of harm. Therefore, seeing that I had no choice, I gave him a silver lantern, weighing 80 ounces, and left it to Saint John to judge.

A few days later, the poor guy who got the silver died from dysentery. Then I related everything to his brother, who was a very good man. He was saddened and said to me: “St John certainly killed him”. Then, he run to his brother’s house; he was looking to verify the matter and when he found all the silver he brought it straight back to us, crying bitterly all the way…

Another one, who was the first captain in Poros, took the oars from our boat, bowing to his own wishes and while he was on his boat on the way towards Piada, he had a fight with others. When they shot at each other, one bullet went through one of our oars and hit him on the thigh. Afterwards, he returned to Poros and gave the oars back to us. He even carried out twice, a blessing of water in front of St John’s holy relic but he was not cured. He later died even though his wound was not fatal.

All these have been made known to everyone and the whole world. What happened next? Those villains, who intended to come during the night and steal all our belongings later, became our protectors. Even the Greek parliament sent a boat and a letter to the provosts of the island to send us on our way to Korinthos, which was free from the Turks at the time, but the people of Poros would in no way let us go. This was a miracle performed by Saint John because had we gone, we would have surely lost the treasures of the monastery, since Korinthos’ castle fell once again to the Turks after a little while. The people of Poros did this good deed to us and Saint John benefited them a lot in return. From these I will tell you one:

For seven years they had been suffering from the presence of locusts and they have been losing all they had. Not only the locusts would not leave even a single green leaf but they would eat away even the peels from the lemon trees. As soon as a procession was launched with the relic of the holy, right hand of Saint John leading the way, all the locusts disappeared and the people were consoled because they had started reaping the fruits of their efforts. Indicatively, those days we never needed a doctor, because of the presence of Saint John. They had so benefited from all the miracles that were happening that they wanted us to live at the monastery of Zoodohou Pigis. We did, and we no longer had any material needs. Until the Turks torched Psara from one end to the other and we got scared and left for Eptanisa, the island of Zakinthos. There, the Christians welcomed us and we lived peacefully for four years, truly contended.

When the governor, John Kapodistrias, arrived in Greece, we left Zakinthos and returned to Greece, to the island of Skopelos, at our metohi of Faneromeni, where we stayed for one and a half years. Then, we eventually returned to our own holy monastery with our entire collection of holy relics. Glory be to the Lord, to His Holy Mother, our benefactor, and to our protector, Saint John, for everything. We returned to our monastery on the 5th June 1830. I beg the readers to pray for me, the humble abbot Stephanos, so that my soul finds mercy in the Lord, because of your holy prayers. Amen.

2. A miracle performed by the holy right hand of Saint John.

On Monday, the 16th of May 1961, during the Holy liturgy in honor of the Holy Spirit, ieromonahos Paul, described to me the miracle performed by the right hand of Saint John:

“Did you realize what has happened to me during the liturgy, father Lazaros?”

“What? Please explain to me better”.

“Of course you must have heard me how difficult it was for me to chant because my throat was closed up as a result of the long standing laryngitis”.

“Yes, I did realize this. I was even asking myself how you were going to offer the prayers during the liturgy, especially today when there is a sillitourgo”.

“Listen then. When the priests gathered in the church to take “kero” seeing that I was in such a state, I asked the abbot to bless me with the Saint’s holy hand and to cross me with it. The abbot agreed and crossed me on the head with the hand and offered the specific prayer. I also worshipped the hand, praying with fervor and adoration to the saint to cure me from this illness so that I could offer glory to the Lord, chant the proper hymns and read the Gospel clearly and loudly as I should on such a holy day. This is what I more or less said to the saint. And lo! and behold! The great Saint rushed to give me a fast and wonderful response! I immediately felt the presence of Grace, my throat softened up, my voice could now be heard, and in complete comfort, I gave the responses and I read the Gospel. I then offered sincere and heartfelt thanks from the bottom of my heart to our glorious protector, our Lord’s Baptist, with whose intervention we hope to have a blessed end to our lives, and be received in the k. Let it be done, father! Let it be done!”