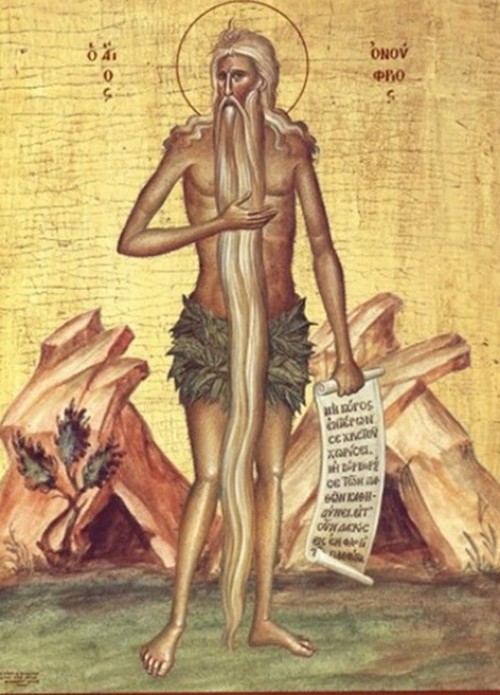 1. A miracle performed to a Turk forester.

This event was conveyed to me by elder Christodoulos, when I was at the Saint Onoufrios Seat and was helping father Ierotheos, who was a gardener, on June 12th, 1944. Father Christodoulos remembered this event, which took place during the Turkish occupation of Greece around 1910, and passed it on to honor the memory of Saint Onoufrios. read more…

“During those days, when I was younger and while I was protecting the forest of the monastery, I met with a Turk forester on my way up to Panayia. He was a government official. After we have been walking around the forest for hours and showing him the boundaries of the monastery, we finally settled here to rest and eat something. The Turk, who was of a strong build, had gotten very tired from our wonders and went down to the fountain to drink water. He was drinking so much, I do not even know how much he drank, and was very pleased. He was telling me: “A! Massialla, massialla, this is cold, this is good” and continued drinking… Not long after, he felt this strong pain and his belly bloated. The swelling was reaching up to his chest and he started crying and asking for help. But I did not know what to do. “I will burst, I will burst!!

Ah! What an ordeal! I turned and toldl Father Joachim, the Crete, you remember him, don’t you?

-Father he will die and we will be in trouble.

– But it is not like this. They will find us guilty, they will drag us to Thessaloniki and God knows how much the monastery will have to pay.

– Ok. What kind of medicine do we have here in the mountain? Do whatever you want. I do not want to get involved. Why did he drink so much, to burst?

Then in my despair I remembered Saint Onoufrios. He is the only one who can save him if he wants to.

The Turk was lying down; was moaning, crying and was screaming for help. I went to the Saint’s icon and bowed down three times. Saint Onoufrie, please help us, so that we do not get into trouble”.

I took the container with Ayiasmos and prayed in front of the icon with my knotted cord, asking faithfully for his help. I picked up the Turk, took him inside the church, placed him in front of the Saint’s icon and told him: “This Saint is the landlord of this house. Only if you ask him, with all your heart, he can save you from death. Bow to him three times, kiss his feet and drink from this holy water and you will be cured”.

Whether he was scared or because of his need, he did as I told him willingly. He bowed three times, his kissed his legs and drunk from the holy water. Afterwards I told him: “Do not be scared. The Saint will cure you. Take a walk to the fountain and you will feel better”. He was listening carefully and did as I told him showing perfect faith. And Lo and behold, my brothers! The miracle was performed!

Fifteen minutes later, he came back totally healthy, while a few minutes ago he was half dead. He then happily and loudly thanked the Saint for the cure and bowed to him many times.

This is what Father Christodoulos told us and we marveled at how the Saint performed wonders even to the unbelievers when they devotedly ask for his help. That is the reason I thought I should recall this event to honor the memory of Saint Onoufrios, the Egyptian.

“ I was planting onions at our farm devoted to Saint Onoufrios, with Anastasios, a labourer from Sykia Xalkidikis. When the time came to leave, we loaded two big sacks of onions on the donkey and started on our way. I felt that something bad was going to happen to us. I told him to lead the donkey, walking in front of it until we reached the monastery because the road was rough and narrow. He didn’t pay attention to my words and said that the animal knew his way better than us. As soon as we passed the two benches and were heading towards the third, one of the sacks which were very heavy, hit the rock on the side of the narrow strip and pulled the donkey downwards towards the other bench. The donkey was trying to get up, but because it was carrying a very heavy load, did not manage and instead it fell into the void. He fell down more than 30-40 feet to the bottom of the river. Oh what a disaster! I thought the donkey had been killed. What was I going to say to the fathers at the monastery?

Then, I remembered the landlord of the farm and from the bottom of my heart I prayed:” Saint Onoufrie, please help us; show us your love and perform a miracle so that the donkey is not killed”. I continued praying with great grief and sorrow while we were very carefully descending towards the river bed. And what do I see? Glory be to my Lord for His astonishing wonders! Saint Onoufrios heard my prayers and appealed to the Lord Almighty and did not permit the animal to die. We found the animal well and healthy, standing on its feet while all the sacks had been were thrown down.

When I saw this wonderful paradox I thanked Saint Onoufrios, who is the protector of this farm and who performs wonders to those who call for his help with love and devotion, for his intervention to our Lord. May also his appeal to the Lord help us secure eternal life and the happiness of the Kingdom of Heaven. Amen”.